Once it passes, a new Palestinian law on organ donations is expected to help the Health Ministry treat the growing number of patients in urgent need of organ transplants. 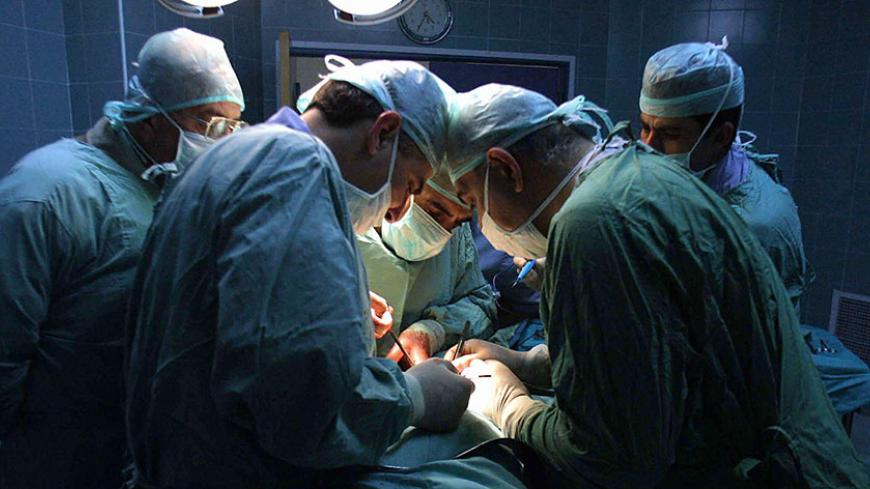 RAMALLAH, West Bank —  At the Palestinian Cabinet’s weekly session Jan. 31, the government decided to postpone the ratification of a bill on human organ transplants, since many other pressing issues were on the table, a government source told Al-Monitor. The source also said the ministers needed more time to respond to the bill, which was presented to them Jan. 3. Once the bill is passed, it will be presented to President Mahmoud Abbas to be signed into law.

The law, prepared by the Health Ministry, would establish a “supreme committee on human organ transplants” headed by the health minister and including members from Palestine’s Dar al-Ifta religious council and the Justice Ministry. Its job would be to organize and administer transplant operations and organ donations and to monitor them according to the law.

The organ transplant law comes under the Palestinian Basic Law — effectively Palestine’s constitution — which allows for organ donations providing a law is set to manage them. Article 16 of the Basic Law says, “No medical experiment or operation may be carried out on someone without prior legal consent, and nobody may be subjected to a medical examination, treatment or operation except under law. The law shall regulate the provisions of organ transplants and other scientific advances for legitimate humanitarian purposes.”

The new law will allow any citizen to donate permitted organs to any person. Currently, the Health Ministry does not allow people to donate organs to anyone except relatives, primarily because no law exists to allow for it. The new law could allow for the creation of an organ bank.

Palestinians reacted in varying ways to the proposal.

Aref Mohammad, a civil servant, supported the law in light of the growing need for organ transplants and donations and the possibility the law could save or improve the lives of hundreds of patients.

Abu Mohammad, a taxi driver in Ramallah, said he was not familiar with the bill but was not against it “providing it doesn’t violate Islamic law.”

Muna Ismael, a college student at Birzeit University, said that while she supports the law, she fears that organ donations could create a market for organ trading, meaning close monitoring was essential.

Arwa al-Tamimi, the head of the Health Ministry’s legal affairs unit, told Al-Monitor that Palestine “urgently needs a law on organ donations to keep up with scientific and medical developments and allow for organ transplants for those who need them, whose numbers are growing day by day.”

The law provides for a committee to be set up to oversee organ donations once it has been signed into law by Abbas and placed in the statute books.

The committee’s role will be “to license centers, hospitals and medical facilities able to remove and implant organs, to prepare lists of patients in need of new organ transplants and lists of organ donors, and to oversee and monitor health facilities,” Tamimi said.

She said the law is based on standards for managing organ transplants, such as outlawing the donation of reproductive organs or those that pass on hereditary characteristics, as that is contrary to Sharia. The committee would need to approve the extraction of organs from donors, approval that would be conditional on the donor being of sound mind and medically fit to donate without it posing present or future risks to his or her health.

The donor would need to give written agreement to the transplant of his or her free will and without any social or economic pressure. Both donor and recipient would have to agree to the operations, and no material or financial reward would be given, as that would be tantamount to organ trading and thus subject to severe penalties.

The law has raised fears of the rise of a black market organ trade, whereby rich patients buy organs from the poor under secret deals made to appear as donations.

Tamimi ruled that out. “There is no organ trading in Palestine and there will be no possibility of that,” she said.

“The aim of the law is to prevent any future attempt to trade organs by introducing standards, such as specifying which health facilities can carry out transplants, clear rules and intense oversight, and deterrent sanctions, including up to five years of prison, a large fine and being banned from the medical profession,” she said.

Implementing the law will require medical capacity and facilities capable of executing it.

“The Health Ministry has qualified medical staff able to do their jobs, and the High Committee will test the health facilities to find out if they are capable of carrying out transplant operations,” Tamimi said.

The law will have positive financial effects for the Health Ministry, she added. “The law will reduce the number of medical transfers overseas and the costs of buying organs and implanting them, which currently cost millions of dollars a year,” she said.

The bill is consistent with Islamic law on organ donations, in accordance with Article 4 of the Basic Law, which states that “the principles of Islamic law are a primary source of legislation.”

Muhammad Ahmad Hussein, the grand mufti of Jerusalem, told Al-Monitor, “The Supreme Ifta Council [a body that rules on issues of religious law] had examined regulations for organ cultivation and transplant, specified which organs could be transplanted and those that may not.”

The council will be a member of the committee to be set up once the law is passed. Hussein said its role will be “to give a Sharia ruling on every transplant of every organ, monitor its being carried out and oversee all the legal controls on the operations.”

He said the council “is permanently in session and is open to the views of international associations for Islamic jurisprudence [to deal with] any issues of disagreement that may arise.”