An Egyptian writer's call for organ donation has reignited debate in Egypt, where a 10-year-old law regulating the procedure has yet to be implemented. 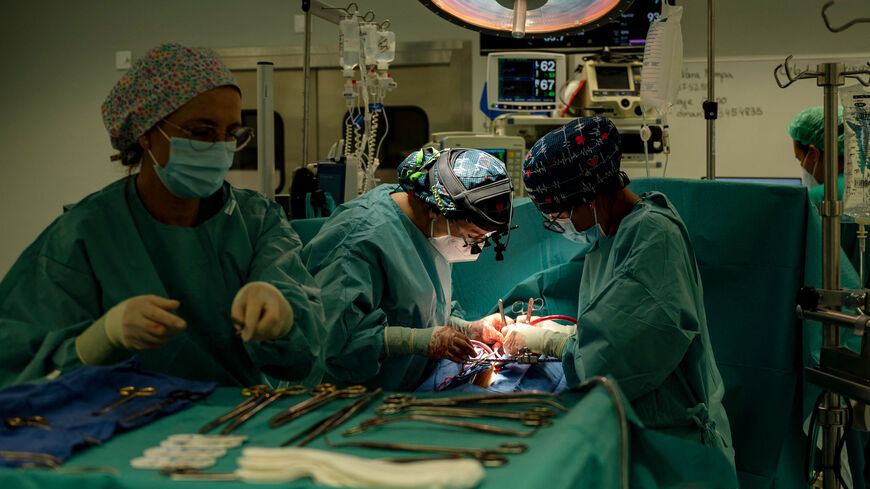 Cardiovascular surgeons Susana Villar (C) and Elsa Rios (R) prepare a patient to receive a new heart from a donor in an operating room in Puerta de Hierro University Hospital in Majadahonda, near Madrid, in this undated photo. - JAVIER SORIANO/AFP via Getty Images

CAIRO — Egyptian writer Khaled Montaser used his Oct. 1 book signing to call on intellectuals, artists, and influential figures to help raise awareness of organ donation. He urged them to register as organ donors to encourage citizens to follow suit.

A number of artists and writers responded. Actress Elham Shaheen announced during the event that she is willing to donate her organs after her death.

The messages reignited the debate on Egypt's Organ Transplant Law No. 5 of 2010. Article 8 of the law allows the transplantation of an organ from the body of a deceased person to a living person if the deceased consented in a documented will.

Article 10 calls for a registry to be created for patients in need of transplants which will be organized by need.

The head of the Egyptian parliament’s health affairs committee, Ashraf Hatem, said in an Oct. 3 telephone interview on the Sada Al-Balad channel that the law regulating organ donations will soon be implemented. “Work will be done with the government to introduce any needed amendments,” he said. “A few articles in the law need to be clarified before parliament so as not to cause confusion during implementation, including articles concerning to the transfer of organs from a deceased person.”

Mohammad Hilal, a member of the Higher Committee for Human Organ Transplantation — a Health Ministry-affiliated body that coordinates donor and transplant centers — told Al-Monitor, “So far, the committee has not approved any organ transplants from a deceased person to a living person. This operation requires a written document from the donor himself before death in which they acknowledge their desire to donate their organs.”

Hilal welcomed Montaser's efforts to promote organ donation but argued that the process requires strict application of the Organ Transplant Law to prevent violations such as organ trafficking. “It also requires establishing organ banks and a database for donors and patients to facilitate matching the organ with the recipient.”

He also called on religious authorities to issue religious rulings on organ donation by terminally ill patients. He explained that some organs are only possible to transplant when the body is still technically alive and blood is still being circulated.

Dayf el-Naggar, who heads the government office that processes the estates of deceased Egyptians, told Al-Monitor that currently, the only way to prove a person is an organ donor after death is their will, a sensitive document the reading of which may take days.

Dr. Mohammed Hassan Khalil, a retired cardiologist and founder of a Cairo-based organization called the Committee for the Defense of the People's Right to Health, told Al-Monitor, “The controversy surrounding the transfer of organs from a deceased person to a living person in Egypt is about the definition of death.”

He explained, “In the past, death was universally defined as the moment when the heart stops beating. But in some cases, the heart can come back to life after a flatline. This led to another definition, which is brain death. When brain function is lost, the patient will irreversibly lose the capacity for consciousness and breathing and the body is kept on life support. At this stage, physicians can carry out heart transfers and transplants.”

These conditions include confirmed death of the donor and not clinical death (brain death). There must be a will signed by the deceased and the process cannot involve any financial compensation. Reproductive organs may not be donated.

Khalil said, “There is a conflict between the new and the old definition of death. Some believe a heart transplant in the case of clinical death is tantamount to murder. But when the matter was submitted to parliament in 2014, it was agreed to leave to the discretion of specialized doctors to confirm death. This amendment opened the door to organ transplants from deceased persons. However, the law has yet to be implemented, and organ donation is still limited to the living relatives of the patient.”

Khalil explained that there are several organs that are suitable for transplantation from a deceased person, including the corneas, pancreas, liver, kidneys and skin.

“The length of viability of these organs after death varies from one organ to another,” he said. “This is why a system must be set up whereby donors would carry cards proving that they are potential donors so that physicians can quickly harvest organs in the event of death. This will spare us the lengthy process of [opening and reading] wills.”

Despite the parliament and Dar al-Ifta’s permission for organ donation after death, Egyptian stances on this issue varied widely on social media. While some praised organ donation as saving lives, others still reject it, saying that organ donation goes too far in tampering with the human body. They argue that bodies are a gift from god and human beings are not their absolute owners. Others warned that promoting post-mortem organ donation might open the door to human organ trafficking.

Khalil attributes Egyptians' reluctance to donate their organs after death to religious misinterpretation. “Regulated organ donation eradicates organ trafficking since organs will be made available within a legal system, which will facilitate access to the needed organs,” he said.