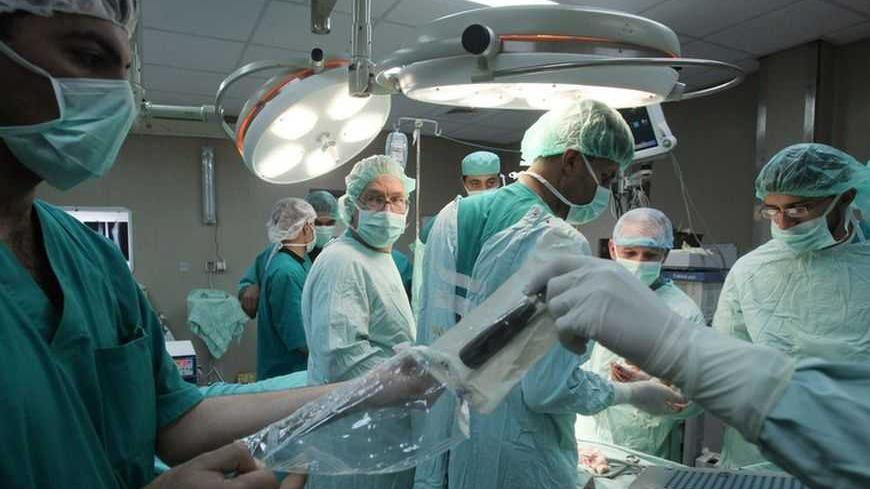 Nadia Ma'touq, 36, and her husband Ziad Ma'touq, 43, are both recovering at the Al-Shifa hospital in Gaza after a seven-hour surgery for a kidney transplant. It is the first such transplant ever conducted in Gaza, and one that saved the life of Ziad, father of six children.

"Ziad suffered from a kidney complication six years ago, after he was hit with high blood pressure. Fifteen years ago, we discovered that Ziad had only one kidney. Throughout this time, he has been very cautious with regard to the type of food and drink, but his remaining kidney began to feel the negative effects of the blood pressure," Nadia told Al-Monitor, while surrounded by her mother-in-law and brother at the hospital.

Last summer, Nadia and Ziad, along with their mothers, went to Egypt in search of a hospital that would conduct a kidney transplant after Nadia decided to donate one of her kidneys to her husband.

"We prepared the needed papers and went to the Nasser Hospital Institute in Cairo. Yet for some technical reasons, we could not complete the surgery , so we moved to another Cairo hospital nearby, where the service was available. We were told that the surgery would cost $15,000, which we could not afford. Following a couple of months in Cairo, we returned back to Gaza with a great deal of disappointment," Nadia recalled.

Fortunes changed for Ziad last month, whose health was deteriorating sharply, when Nadia received a phone call from Ziad's local doctor saying that it would be possible to do the transplant in Gaza, at Al-Shifa Hospital.

The surgery, as well as a transplant for another patient, took place last week with the help of international staff from the UK. Three surgeons and one scientist from the Royal Liverpool University Hospital performed the surgery with the assistance of local staff.

Abdelqader Hammad, a member of the international team and originally a Palestinian from Jaffa, had been living in the UK for the past 25 years when he decided to come to Gaza to see if he could apply his medical expertise to assist locals.

“I came over to Gaza nine months ago with the idea of helping our brothers and sisters in Gaza on ways to undertake such surgical operations for Gaza patients,” he said.

“During the preparation work, we attempted to take blood samples for both recipients and donors of a kidney, but only the fourth attempt succeeded. Some previous samples were either confiscated at border crossings or were delayed, but finally we made the needed tests before we came here a few weeks ago," Hammad told Al-Monitor while training local staff doctors at the Al-Shifa hospital.

Hammad acknowledges the transplant project run by his Liverpool hospital in Gaza is ambitious, but he expects Gaza doctors to be able to conduct the surgeries on their own within two to three years.

"Our aim is to make sure that Gaza’s local staff are independent and can do such surgeries efficiently, but this requires some time. Our purpose for the moment is to train local staff on some important elements of the surgeries, like tissue typing, which means ensuring best compatibility between both kidneys," he explained.

Israel’s five-year blockade of the Gaza Strip has also at times included a restriction of important medical supplies, rendering Gaza’s hospitals incapable of treating some severe illnesses. But Hammad’s team was able to avoid any setbacks caused by the political conflict with Israel, bringing his own equipment from the UK.

“We brought with us some needed equipment and medications from our hospital in the UK. We already knew that Gaza's hospitals lacked such important items. At the end of the day, we are happy that the surgeries succeeded."

Hammad noted that a part of their plans is to be able to train Gaza doctors at the Royal Liverpool Hospital to better ensure local staff is capable of conducting transplants, not only for kidney, but for other organs as well.

Derek Middleton, a scientist with the Liverpool hospital team, has been training Al-Shifa hospital doctors on how to conduct blood sampling tests and tissue typing for transplants.

"Deceased donors are most likely incompatible. Therefore, I am making sure local doctors are well aware of the whole process of preparation before they proceed with any surgery. Still, there is a lot more to be done until doctors here are pretty efficient and independent,” Middleton said.

The efforts have won the support of Gaza’s health ministry. There are at least 500 Palestinians with kidney failure in the Gaza Strip, who must dialysis twice a week at a number of hospitals, according to Mohammad al-Kadhef, Director of International Cooperation at the health ministry. Once the program run by the Royal Liverpool Hospital is completed, at least 120 kidney failure patients will be able to have transplants, Kadhef said.

The kidney transplant project is not a first for Gaza. The Hamas government has done similar cooperative initiatives with foreign agencies on other illnesses.

“We have done similar programs for pediatric catheterization operations and open-heart surgeries in cooperation with international medical staff such as Jordanians and Egyptians, and we still maintain such cooperation,” Kadhef said, adding that the government welcomed “further support or funding by potential international donors.”

The two kidney transplants were funded by the UAE-based Benevolent Society, which has a branch in Gaza. The Society paid for the travel expenses and accommodation for the UK staff, as well as the sample tests.

Kadhef appealed for similar donations from abroad, especially in terms of medical equipment and medications unavailable in the Gaza Strip.

“Politics should be avoided completely when it comes to humanitarian services that are so needed."