Since the end of the recent war that saw Israeli strikes devastate the Gaza Strip, health delegations have been flocking into Gaza in the hopes of helping revive the health sector that already had been ailing due to the coronavirus pandemic. 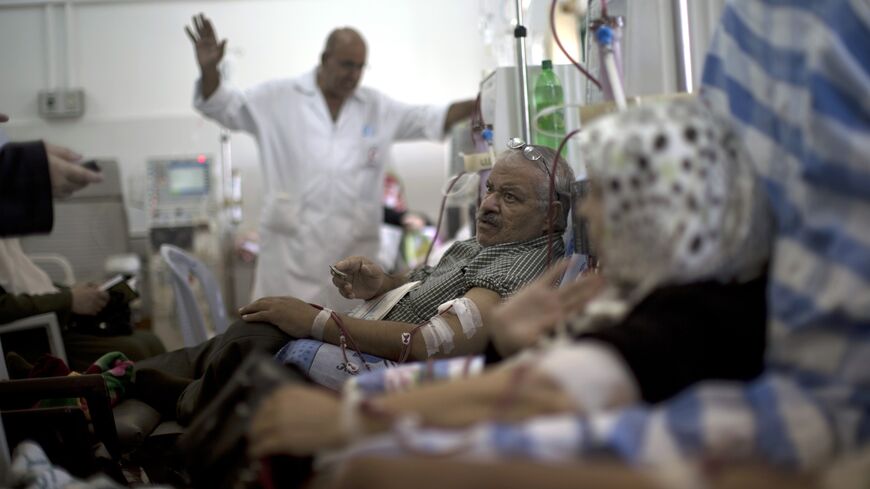 Palestinian patients undergo kidney dialysis at Dar al-Shifa Medical Center in Gaza City on Sept. 14, 2013. The health situation in the Gaza Strip has been facing difficulties because of the coronavirus pandemic, Israeli restrictions and the devastation Israeli airstrikes caused to the enclave. Once the Israeli-Gaza war ended on May 21, 2021, a Jordanian team came in to perform four kidney transplants in the enclave. - MAHMUD HAMS/AFP via Getty Images

Mohammed Rajab is a 27-year-old young man from Beit Lahia in the northern Gaza Strip who suffered from kidney failure and required a kidney transplant. He wanted the transplant to be carried out inside the Gaza Strip.

This surgery depended on the arrival of a Jordanian medical delegation that has regularly visited Gaza over the years to perform kidney transplants for patients. But starting in 2020, the coronavirus pandemic repeatedly delayed the arrival of the Jordanian delegation to Gaza.

But after the Israeli-Gaza war ended May 21, coupled with an easing of restrictive measures imposed to stem the spread of the coronavirus, a number of health delegations flocked to Gaza in the hopes of reviving the enclave’s fragile health sector. The delegations included experts in complex operations such as neurosurgery, cardiac surgery and orthopedic surgery, among others.

The Jordanian delegation that Rajab had been waiting for was among the delegations that recently arrived in Gaza. Along with four other patients, Rajab underwent a kidney transplant at the hands of the delegation led by famous doctor Walid Massoud. On July 2, Rajab received a kidney donated by his father in the major operating room of Dar al-Shifa Medical Center in Gaza City.

Rajab, who now has to remain isolated for six months in order to avoid infections, told Al-Monitor over the phone, “The suffering is over, and God willing I will be leading a new life.”

Rajab had been receiving kidney dialysis three times a week for two years. He cannot seem to forget his experience at the dialysis department, where he would panic that a medical error might occur due to the lack of resources. He also cannot help but think of the patients who could not even afford to be treated at the hospital.

Rajab’s father, Musa Rajab, 68, told Al-Monitor that saving his son was a no-brainer for him. He said that his son wanted to get married but that the wedding got called off due to his sudden kidney failure, adding that the coronavirus-related measures that impeded the operation were very difficult.

“Tests showed that my kidney was the only match with my son’s, and the more the surgery got delayed the sadder I was,” he added.

The director general of Dar al-Shifa Medical Center, Dr. Mohammed Abu Salmiya, said the Israeli blockade imposed since 2007 on the Gaza Strip made it impossible for local medical staff to attend conferences and training outside Gaza to keep up with the latest technologies in the field. He told Al-Monitor that the siege has also prevented the arrival of medical devices or spare parts needed for maintenance operations at hospitals and clinics, which is why Gaza has been relying on foreign medical delegations.

Abu Salmiya said he was not able to perform complex vascular, neurosurgery, cardiac, pediatric and orthopedic surgeries in Gaza except in the presence of foreign medical delegations that have experience using technologies and devices that have been donated to the enclave.

“We sometimes receive advanced medical devices in Gaza as donations, but we need training to use them since we are not familiar with their techniques. We also receive some endoscopic surgery devices, for example. But their cameras sometimes break down, so such delegations provide spare parts for them,” he added.

Abu Salmiya added that these delegations have a strong professional performance, as they have the scientific experience and practical skills necessary to support Gaza’s health sector. He also said that after their return to their home countries, delegations follow up on diagnosed cases or provide advice for operations with the Gaza team via Zoom or other videoconferencing techniques.

Abu Salmiya said Israel sometimes impedes the arrival of medical delegations. For example, Massoud spent three months trying to make it to the Gaza Strip. After the end of the May war, several delegations were prevented from reaching Gaza, Abu Salmiya added.

Dr. Raed al-Areeni, who serves as the head of the thoracic surgery department at Dar al-Shifa Medical Center and who recently accompanied a delegation from Physicians for Human Rights-Occupied Palestinian Territories, told Al-Monitor that medical delegations to Gaza offer modern equipment and training on how to use it. Some delegations provide medical supplies, some of which are for one-time use only, especially in laparoscopic surgeries, or surgical tools that are not available due to the Israeli siege.

Areeni said, “Through these visits, we have accumulated expertise and medical technologies, and we are providing high-level medical services in the Gaza Strip.”

He pointed to the importance of the Palestinian American Medical Association team’s visit, as the team performed more than eight major surgeries (four open-heart surgeries and four laparoscopic and thoracoscopic procedures), including two thymus gland resections. The team also performed many other chest operations, he added.

Areeni said that because the medical field requires keeping pace with fast-moving developments, and because Gaza has been witnessing wars that leave many injuries, there is an important exchange of experiences and discussions with the various medical delegations that visit the enclave.