Now that diplomatic relations have improved, Israel hopes to increase and expand its exportations to Turkey in fields such as water treatment, smart agriculture and energy. 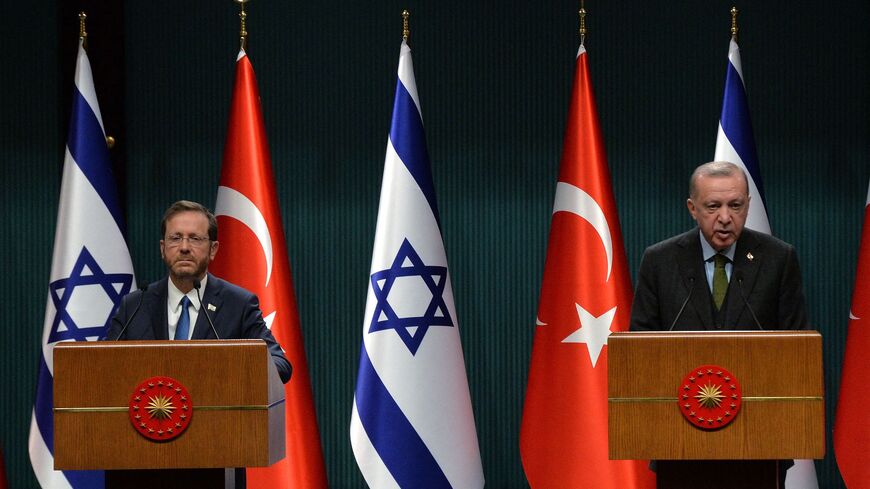 The warming of diplomatic relations between Israel and Turkey is already having an impact on economic ties between the two countries.

The main casualty of the tension was Israeli tourism to Turkey. Other industries continued almost at the same rhythm, though did not really grow. Now that relations are warming again, their impact on bilateral trade is expected to be impressive.

Figures published recently place Israel among Turkey’s top 10 trading partners. Data from the Turkish Ministry of Commerce show that in the first seven months of this year, the amount of trade reached almost $4.2 billion, compared to $3.3 billion for the same period last year.

Gad Shushan, who heads the Israel-Turkey Chamber of Commerce, told Al-Monitor that trade is expected to reach almost $8 billion in 2022, compared to slightly less than $7 billion last year. “There is no big boom,” he explained. “Instead, there is steady growth year by year. However, due to the warming of relations between the two countries, I expect the increase in 2023 to be far more dramatic, with new branches of trade entering the picture.”

Currently, the balance of bilateral trade favors Turkeys, with 80% consisting of Turkish exports to Israel. Most of it is automobiles from the Renault, Toyota and Volkswagen factories in Turkey, huge amounts of cement for construction and raw materials for industry such as iron and glass. In return, Israel exports fresh produce, agricultural equipment such as drip irrigation and greenhouse equipment, petroleum products and equipment to produce renewable energy.

Why hasn’t trade suffered during the many years of acrimony between the two states?

Shushan says that Turkish President Recep Tayyip Erdogan is a wise man who made the strategic decision to avoid impinging on Turkish exports to Israel. “We rank eighth among the countries to which Turkey exports goods. Furthermore, as a rule, the Turkish public is not opposed to Israel. Even at the height of the Mavi Marmara Gaza flotilla crisis, I traveled all across Turkey without hiding the fact that I am Israeli, and I only received warm responses.”

The 2010 Mavi Marmara incident in which pro-Palestinian militants tried to break the deadlock on Gaza and where nine Turkish activists were killed by IDF fire led to a crisis in the relationship between the two countries, with their respective ambassadors being recalled. It was not until 2016 that Israel agreed to pay compensation to the families of the casualties. Even then, however, relations between the two countries remained chilly. It was only this year that they finally improved. The thaw can be attributed to Israeli President Isaac Herzog who visited Ankara this past March and met with Erdogan, resulting in the countries agreeing to restore their ambassadors.

This warming withstood a security test this past June, when operatives from Iran infiltrated Turkey, intending to kill Israeli tourists. The Israeli Mossad, which warned the Turks, cooperated closely with the Turkish security services, and most of the terrorists were captured.

Shushan and senior officials in the Israeli Ministry of the Economy now believe that this warming of relations will lead to a dramatic increase in the scope of trade, especially with regard to Israeli exports to Turkey.

“Next year we expect that together with the warming of diplomatic relations between us, we will also see a very extensive expansion of Israeli exports to Turkey, with an emphasis on products that they need, such as smart agriculture technologies, which take better advantage of cropland. This will include the most advanced forms of agritech, such as the use of gliders to control crops, genetically engineered agricultural products and robots to pollinate crops instead of bees.”

He also brought up the exportation of special hothouses to raise vanilla, a popular flavoring in Turkey that normally grows in tropical areas. The greenhouses, which are manufactured and maintained by an Israeli company, are already being installed in Turkey and their numbers are expected to increase considerably. Another important area is water treatment. While there is no shortage of water in most of Turkey’s territory, the treatment of drinking water is lacking, as is the treatment and use of reclaimed sewage water for agriculture.

Erdogan is also working on ties with other key Mediterranean countries, namely Greece and Egypt. Much of these efforts evolve around energy resources — the vast reservoirs of natural gas in the eastern Mediterranean — to help Europe break free of its dependence on Russian gas. Israel has already signed an agreement with the EU to sell it gas via Egypt. Another possibility is the laying of a pipeline from Israel’s offshore reservoirs to the Turkish coast, and from there to export it to Europe via existing pipelines.

Another important area is tourism. On Sept. 4, the government approved an agreement to allow flights to and from Turkey by Israeli airlines. The agreement, which was signed in July, should significantly increase the number of travelers between the two countries.

Israeli airlines have not flown to Turkey for the past few years. Flights mostly stopped in 2007. Turkish Airlines continued to operate at least 10 flights daily between Israel and Istanbul, but other Turkish airlines including Pegasus also benefited from the situation.

Israeli Minister of Transportation Merav Michaeli, who signed the agreement, said that it was intended to make the situation more balanced and to respond to the growing need of Israelis to fly to Turkey and from there to the rest of the world. “Our aviation relations with other countries in the region are a strategic tool to develop Israel’s economy and preserve Israel’s resilience in the region.”

That statement is certainly true for other areas as well.