A new aviation agreement would pave the way for Israeli airline companies’ flights to Turkey, which were suspended due to security concerns in 2007. 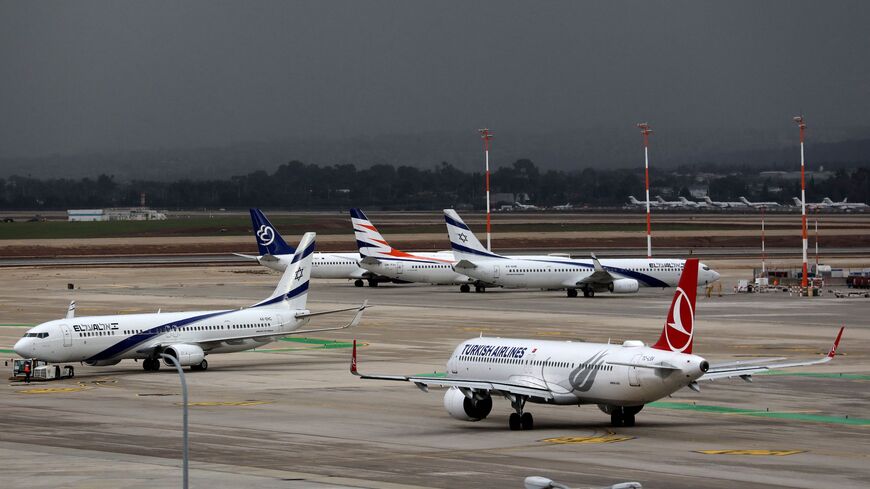 This picture taken on Dec. 21, 2021, shows a view of (foreground L to R) a Boeing 737 aircraft of Israel's El Al and an Airbus A321 aircraft of Turkish Airlines at Israel's Ben Gurion Airport in Lod, east of Tel Aviv. - GIL COHEN-MAGEN/AFP via Getty Images

Turkey and Israel, former foes inching toward normalization for one and a half years, have taken new steps toward reconciliation as they initialed an aviation accord and announced the reopening of the Israeli commercial office in Istanbul.

The presidents of the two countries, Isaac Herzog of Israel and Recep Tayyip Erdogan of Turkey, also talked on the phone today, Turkey’s Communication Directorate announced. The two leaders discussed bilateral and regional issues and expressed the will to further bilateral relations through “concrete steps.” Herzog also extended his good wishes to Erdogan for Muslim festival of Eid al-Adha that starts on July 9.

The civil aviation authorities of the two countries initialed a new aviation agreement today to update the bilateral accord that dates to 1951, paving the way for the resumption of Israeli flights to Turkey after a break of more than a decade. El Al stopped its flights to Turkey in 2007, citing security concerns. An attempt to restore flights was made in 2013 when the two countries experienced a short-lived reconciliation period after the 2010 Mavi Marmara raid but yielded no results. In 2020, Israel’s national carrier El Al resumed cargo flights from Israel to Turkey, but passenger flights have remained canceled.

“The initialing is a vital stage toward fully signing the aviation agreement, which is expected to allow Israeli airlines to resume flying to Tűrkiye,” a statement from the Israeli Prime Minister’s Office said, using Turkiye instead of Turkey after the country rebranded the name.

The Israeli statement said the initialing of the accord was made possible by the “open and constructive” negotiations between the two countries' civil aviation authorities and constituted a “milestone in advancing bilateral relations.”

“Aviation relations are a strategic tool for Israel’s economic development and of particular importance toward Israel's regional position,” Israeli Transport Minister Merav Michaeli said, posting her photo with Turkish Transport Minister Adil Karaismailoglu on Twitter. “The agreement would create the infrastructure that would enable the return of Israeli flights to a variety of destinations in Turkey, in addition to the flights of Turkish companies to Israel…Have a pleasant flight,” she tweeted.

While the Israeli side diffused the news of the accord with promptness and efficiency, the Turkish side remained quiet. Officials in the Turkish Civil Aviation Authority and the Ministry of Transport, reached by Al-Monitor, were throwing the ball back and forth on who would make a press statement or whether there would be one on the Turkish side. The Civil Aviation General Directorate’s website’s latest information on the Turkish-Israeli accord was that Turkish and Israeli delegations had come together on July 4 to “discuss air transport and security.” The discussion included various points for signing an aviation accord and return of Israeli flights to Turkey.

The resumption of Israeli flights to several destinations in Turkey was discussed by Foreign Minister Mevlut Cavusoglu and his then-counterpart, Prime Minister Yair Lapid, both in Turkey and Israel. During Cavusoglu’s visit to Israel in May, the two exchanged pleasantries on Israelis' love for Turkey and places that would be attractive to Turkish tourists besides Istanbul, Turkey’s top touristic destination, which had once been home to a sizable Jewish community.

“Beyond diplomacy, Israelis simply love Turkey. Every day, tens of flights depart Israel for Turkey with thousands of Israelis who love your culture and music, beautiful beaches and colorful bazaars,” Lapid said, as Cavusoglu responded that Israeli tourists could diversify their destinations in Turkey. “Israeli tourists visit Istanbul and the Mediterranean coast, including my hometown Antalya. But there are other, lesser-known attractive destinations, such as the Black Sea coast,” he said. "So we will be happy to see your national carriers and other Israeli companies flying to different destinations in Turkey and between different cities in Turkey and Israel."

After today’s announcement, an El Al spokesperson told Reuters this was good news. "We have an intention to fly commercial flights to Istanbul." He added that El Al unit Sun D'or would likely fly to leisure destinations popular with Israelis, such as Antalya.

Turkish Airlines, Turkey’s ambitious carrier, has more than 60 flights per week to Israel from Istanbul. According to the Israel Airports Authority, it is the third-largest airline operating in Israel. Pegasus, a Turkish budget carrier, is sixth.

In June, just as Turkish operators were pinning their hopes on Israeli tourists, the Israeli National Security Council raised the threat level for Turkey on June 13 following the publication of reports that Israel and Turkey thwarted an Iranian terrorist attack in the city. Turkish officials hastened to assure their counterparts that they were doing all they could to protect people in Turkey from terrorism.

The new aviation accord dovetails an announcement earlier this week that Israel’s economic office in Istanbul, Turkey’s economic and cultural capital, will resume operations as of Aug. 1. The office was closed down in 2019. "The reopening of the economic attache reflects Israel's commitment to deepening economic ties with Turkey," Israel's Economy Minister Orna Barbivay said on July 5. "We intend to soon promote a joint economic conference between the countries after more than a decade."

Despite the strain in bilateral ties, Turkey and Israel continued their trade ties. Bilateral trade of goods and services reached $7.7 billion in 2021, marking a 30% increase over the previous year. More than 1,500 Israeli companies, big and small, export to Turkey.

Oguz Celikkol, former Turkish ambassador to Israel, said both steps had been significant. “We are seeing the acceleration of the normalization process,” he said. “The aviation accord will greatly contribute to tourism and increase the bilateral trade between the two countries. The opening of the trade office is equally important. Appointment of ambassadors will be a critical step of the normalization."

Both governments expelled ambassadors in May 2018 following deadly clashes between Israeli security forces and Palestinians on the Gaza border, but they are now looking to restore representation to the ambassador level.