Israeli Prime Minister Lapid and Turkish President Erdogan agree on phone that the decision to return ambassadors and consuls general to Israel and Turkey will lead to new steps, including the upcoming convening of the Joint Economic Commission in Israel in September. 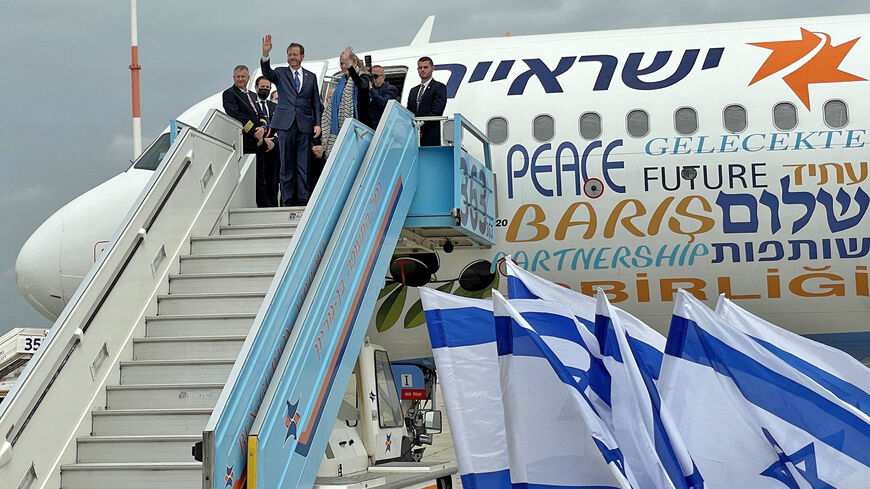 Israel's President Isaac Herzog waves as he departs for an official visit to Turkey on March 9, 2022, at the tarmac of Ben Gurion Airport. Herzog headed to Turkey to meet his counterpart, Recep Tayyip Erdogan, the first visit by an Israeli head of state since 2007, as the countries seek to mend fractured ties. - DAPHNE LEMELIN/AFP via Getty Images

Turkey and Israel announced Wednesday that they would restore full diplomatic ties by dispatching ambassadors after a four-year chill.

“The restoration of diplomatic relations is a continuation of the positive direction in the development of ties that occurred over the past year since President Isaac Herzog’s visit to Ankara and the mutual visits of each country’s foreign ministers to Jerusalem and Ankara. Upgrading relations will contribute to deepening ties between the two peoples, expanding economic, trade and cultural ties, and strengthening regional stability,” read a statement from Yair Lapid, Israel’s caretaker prime minister.

In Ankara, Foreign Minister Mevlut Cavusoglu announced that the rapprochement with Israel had begun after a new government succeeded that of Benjamin Netanyahu in mid-2021. “The appointment of ambassadors was among the steps we said we would take to normalize relations,” he told reporters. However, as traditional in any statement on the improvement of ties with Israel, Cavusoglu underlined that Turkey would continue to support the Palestinians. “We will continue to defend the rights of Palestine, Jerusalem and Gaza.”

Turkey and Israel, once friends and regional allies, have had a stormy relationship since 2010 when Israeli forces stormed a Gaza-bound flotilla carrying humanitarian aid for Palestinians under an Israeli blockade, killing nine Turkish activists. Although the two sides tried to leave behind the incident in 2013, the reconciliation efforts were short-lived. In 2018, Turkey again pulled back its ambassador after escalating attacks against Palestinians in Gaza and the Donald Trump administration’s decision to move the US Embassy to Jerusalem.

Shortly after the announcement Wednesday, Lapid and Erdogan talked on the phone to thank one another for the recent development of bilateral relations following dialogue between them and reciprocal visits. Both agreed that the step will lead to many achievements, especially in the fields of commerce and tourism.

Neither side announced any names for ambassadors on Wednesday.

Well-placed sources speaking not for attribution to Al-Monitor said that Irit Lillian, Israel’s charge d’affaires in Ankara since early 2021 and a career diplomat, is a likely candidate for the job. The sources added that because Israel is currently being run by an interim government the envoy’s appointment would require a “special process.”

It is unclear whether the new Turkish ambassador to Tel Aviv would be Ufuk Ulutas, a former director of pro-governmental think tank SETA and who was named to the post in 2020, or a new name altogether. Foreign Ministry sources say that an experienced career diplomat may be better at this critical stage in relations. Still, President Recep Tayyip Erdogan’s tendency to name his close circles as ambassadors may result in a political appointee in Tel Aviv.

“The move to reappoint ambassadors is no surprise. We were all waiting for this step to happen,” said Louis Fishman, an associate professor at Brooklyn College and the author of  “Jews and Palestinians in the Late Ottoman Era 1908-1914: Claiming the Homeland.”

“It looks as if Lapid wants to solidify the rapprochement with Turkey ahead of the Israeli elections in November,” he told Al-Monitor. “It is also worth noting that President Herzog, who paid a visit to Turkey earlier this year, is an important force behind this step and the overall improvement in Turco-Israeli ties. Of course, the Israeli president is largely a figurehead and has limited powers, but the relations with Turkey is one area where he has been active.”

Herzog made a statement immediately after the announcement to dispatch ambassadors.

“I commend the renewal of full diplomatic relations with Turkey — an important development that we've been leading for the past year, which will encourage greater economic relations, mutual tourism, and friendship between the Israeli and Turkish peoples,” he tweeted both in Hebrew and Turkish, posting a photo of the two countries’ flags during his visit to Turkey.

I commend the renewal of full diplomatic relations with Turkey — an important development that we've been leading for the past year, which will encourage greater economic relations, mutual tourism, and friendship between the Israeli and Turkish peoples. 🇮🇱🇹🇷 @RTErdogan pic.twitter.com/If5JsKfAfV

Herzog’s visit in March, which Erdogan described as a “turning point” in relations, was followed by ministerial visits and various soft-diplomacy moves on both sides. “We have signed a civil aviation agreement [that will enable Israeli national airline El-Al to resume passenger flights to Turkey], and we will hold a Joint Economic Council meeting in September,” he said.

While cash-strapped and diplomatically isolated Turkey has been eager to mend fences with Israel and other Middle Eastern neighbors in the last 12 months, Israel was initially coy, urging Turkey to close down the offices of Hamas in the country before a full normalization.

“Though we cannot fully know what went on behind the scenes regarding Hamas, the appointment of ambassadors indicate that Israel is persuaded that Turkey took certain steps on controlling the movement of Hamas within the country,” Fishman told Al-Monitor. “Hamas is quieting down. I think it was significant that Hamas remained on the sidelines in last week’s clashes between Israel and Islamic Jihad rather than jump in and escalate tensions.”

Sinan Ulgen, a Carnegie Europe visiting scholar and former Turkish diplomat, said that the recent cooperation between the security apparatus of the two countries to thwart an Iranian assassination plot against Israeli tourists and a retired diplomat in Istanbul helped build trust between the two sides. “The elevation of the diplomatic representation is a welcome step,” Ulgen told Al-Monitor.

The regional context, such as the shifting security perception of the United States and the growing risk caused by Iran if there is no agreement to salvage a landmark nuclear deal, necessitated that the two countries reconcile and cooperate, Ulgen said. “We may now see some concrete steps in ties on trade or defense industry,” he explained. “Of course, what Turkey expects to see from Israel and the Jewish lobby is its support to push the F-16 deal through the US Congress.”

“Turkey and Israel have a lot to benefit from relations — economically, academically, on a longer-term, in the field of energy,” Fishman agreed. “On the other hand, Turkey will remain sympathetic to the Palestinian cause and the relations can be limited if Israel does not take concrete steps to improve Palestinians' lives.”