The calm and unprovocative demeanor of Prime Minister Yair Lapid is earning him growing support within the Israeli electorate. 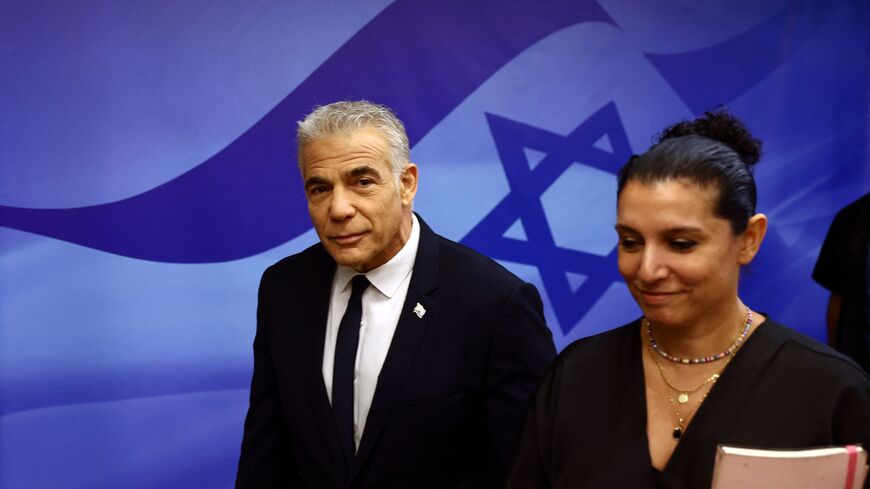 With just six weeks left before the Nov. 1 elections, Prime Minister Yair Lapid is calm. His campaign consists simply of working very hard, day and night, at his post. He avoids getting dragged into mudslinging and exudes an aura of dignity and responsibility.

Unlike his predecessor Naftali Bennett, Lapid has been climbing slowly but surely in the polls in the three months since he became Israel’s caretaker prime minister.

On the eve of his takeover in late June, Lapid's Yesh Atid party was polling at 17 Knesset seats, the same number it garnered in last year’s elections. These days, the polls are giving him 23 to 25 seats. “If this is our non-campaign, who needs a campaign?” one of the prime minister’s top aides commented to Al-Monitor on condition of anonymity. “Let us hope this is exactly how our non-campaign continues.”

Last week, Lapid flew to Berlin, taking with him five Holocaust survivors. Lapid is at his very best at such events, himself the son of a prominent survivor (the late politician and pundit Yosef “Tommy” Lapid). He also brought back a declaration of support by Chancellor Olaf Scholz for Israel’s policy on the Iran nuclear issue and progress on billions of dollars in potential German defense acquisitions from Israel.

In New York this week, Lapid will address the UN General Assembly. His people are promising an impressive speech. Lapid’s schedule includes a marathon of meetings with world leaders on the sidelines of the annual international gathering, among them Turkish President Recep Tayyip Erdogan, the first such meeting with a Turkish head of state in over a decade of deeply eroded relations.

This is Lapid’s campaign: just being prime minister and proving to the Israeli electorate that Israel is doing very well with out former leader Benjamin Netanyahu.

In press interviews ahead of the Sept. 25 Jewish New Year, Lapid avoided lashing out at his rivals in the anti-Netanyahu bloc who are also vying for the prime minister’s office. Confronted with unflattering comments Defense Minister Benny Gantz made about him, Lapid reportedly maintained a zen-like equanimity. Gantz is an excellent defense minister and the cooperation between us is great, he said. Asked about the negative campaigning, Lapid remained composed and assured his interviewer that the public does not buy it.

Lapid’s strategy is clear: to relieve voters who are sick and tired of the tumult to which they have been subjected for almost four years of indecisive elections, with endless wrangling and name-calling. Lapid’s campaign managers believe that voters will choose a leader who can promise them stability. Lapid is striving to present an image of that leader, with significant success, and has no intention of being dragged into unnecessary conflict with Hezbollah on Israel’s northern border, where negotiations on the maritime borders between Israel and Lebanon appear to have hit a snag, nor in the domestic political arena.

Lapid nonetheless is facing problems. The increased support in his favor does not come from Netanyahu’s camp but from within his own, at the expense of his partner parties.

Lapid’s failure in pushing Israeli Labor and Meretz to merge, combined with increased support for himself, could cost these two parties dearly. One or even both risk failing to pass the Knesset entry threshold. Should his continued rise leave Meretz and Labor out of the parliament, Lapid will claim only a pyrrhic victory for his centrist party and allow Netanyahu and his camp of ultra-Orthodox and radical right parties to return to power.

The last-minute split last week in the Joint List is yet another headache. While Netanyahu successfully united all the parties of his bloc (other than Interior Minister Ayelet Shaked's breakaway party, which is refusing to bow out of the race and thus threatens to waste votes for the bloc), Lapid’s side consists of several blocs, each with an overabundance of egos.

Thus, while Lapid’s Yesh Atid is gradually shrinking the gap with Netanyahu’s Likud, he is risking yet another tied and inconclusive election.

Lapid’s chances depend to a large extent on turnout by Israel’s 21% Arab minority. The split in the three-party Joint List makes his job tougher than ever. But even if Lapid successfully blocs Netanyahu at the 60-seat mark, he would face innumerable troubles in putting together a stable government. The two ultra-Orthodox parties are still boycotting Lapid over his anti-clerical stance, viewing Gantz, with his religious background, as far more palatable and thus making him far more likely to form a sustainable government.

None of these hurdles seem to be discouraging Lapid, and may even be encouraging him to stay his dignified and conciliatory course. Polls he has commissioned indicate that voters are hungry for such a clean campaign, a rarity in modern Israeli politics.

This is the first time since 2009 that Netanyahu will not be running as the incumbent. In the past seven election rounds, he dictated the agenda and called the shots. Lapid will do everything in his power to prevent Netanyahu from reclaiming the helm, but within the limits of dignified and reasonable conduct. It will be interesting to see how that works out for him.