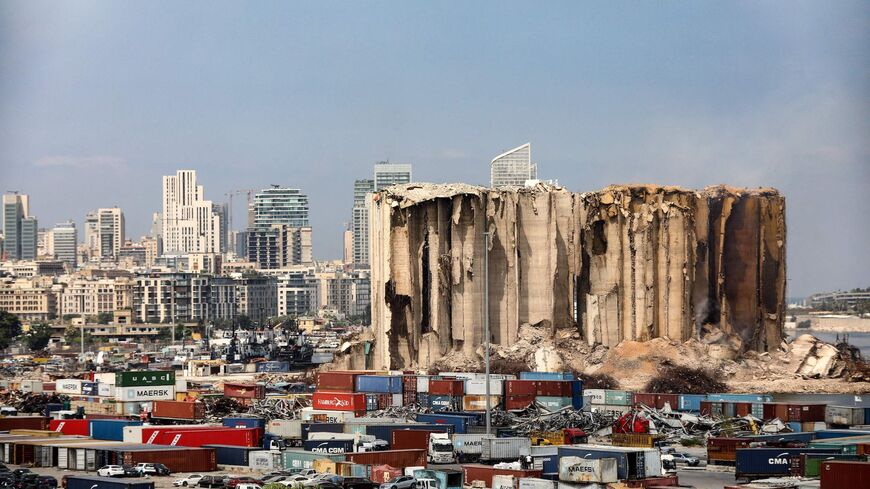 A picture shows the damaged grain silos at the port of the Lebanese capital, Beirut, on Aug. 3, 2022, following a partial collapse due to an ongoing fire since the beginning of the month. - IBRAHIM AMRO/AFP via Getty Images

The World Bank released another report on Lebanon’s dire economic crisis today, a day before the two-year anniversary of the Beirut port explosion.

The DC-based institution titled its Lebanon Public Finance Review “Ponzi Finance?” referring to the Ponzi fraud scheme whereby new investors are paid with funds from old investors. The report began with a “message” to the Lebanese people in English, Arabic and French. In the message, the World Bank called Lebanon’s crisis “deliberate."

“A significant portion of people’s savings in the form of deposits at commercial banks have been misused and misspent over the past 30 years,” The World Bank said in the report.

The World Bank specifically blamed the government for accumulating more debt than necessary and using public services for its own benefit. Specifically, the bank said that the country’s elites used state resources for private gains by weakening public services, which allowed lucrative private sector deals such as for fuel-based generators and private trash collection. This also enabled religious groups to “tighten their grip on citizens” by providing services themselves, which strengthened Lebanon’s power-sharing system between Muslim and Christian communities, according to the report.

The World Bank also repeated its reform proposals from 2020, including a debt restructuring program, an infrastructure development package, and measures against corruption and inefficiency in the public sector.

Lebanon has been suffering from an economic crisis since 2019, marked by food and fuel shortages, the depreciation of Lebanon’s currency and more. The situation worsened on Aug. 4, 2020, when fertilizer caught fire in Beirut’s port and led to a massive explosion. The blast killed hundreds and damaged much of the city. To date, no Lebanese officials have been convicted in relation to the explosion, despite an official inquiry.

The Beirut port explosion aftermath has made headlines recently. Last month, fires broke out at the port’s grain silos. Today, some Lebanese media reported that the silos could collapse at any minute.