Families of the Beirut port explosion victims continue to protest, asking for justice. 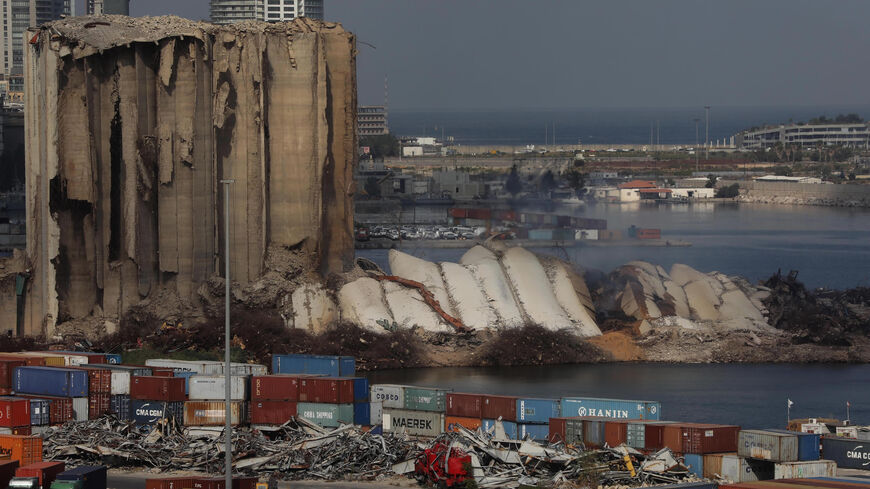 The northern collapsed section of the grain silos in the Port of Beirut, Lebanon, Aug. 23, 2022. - Marwan Tahtah/Getty Images

Families of the Beirut port explosion clashed again this week with riot police, as they tried to enter the Lebanese Justice Palace, holding photos of the victims and calling for an independent judiciary.

The demonstrations that have continued on Thursday are targeting the Lebanese political leadership accused of delaying the investigation into the port explosion led by Judge Tarek Bitar.

Windows were smashed with some people recalling the 2019 protests that spread across the country, leading to the collapse of the government.

This is not the first time that families of the victims protested demanding justice, and it most probably won’t be the last.

Last September, demonstrators gathered in front of the apartment of Justice Minister Henry Khoury. In February, they staged a sit-in in front of the Justice Palace. In July 2021, hundreds clashed with police outside the home of the caretaker prime minister at the time over the stalled investigation.

The explosion happened on Aug. 4, 2020, in Beirut's port where a large stock of ammonium nitrate had been inappropriately stored since 2014. Ammonium nitrate is a combustible chemical compound used for agricultural purposes as a high-nitrate fertilizer. It can also be used to create explosives.

The container caught fire and led to several explosions that devasted the city and ravaged entire neighborhoods. More than 215 people were killed and around 300,000 were displaced from their homes, according to a Human Rights Watch (HRW) report resulting from an independent investigation.

“It wounded 7,000 people, of whom at least 150 acquired a physical disability; caused untold psychological harm; and damaged 77,000 apartments, displacing over 300,000 people.”

Considered one of the biggest non-nuclear explosions of all time, videos of the event, and its aftermath went viral on social media and online platforms showing how surreal the situation on the ground was. It resulted in $15 billion in property damages and an estimated $3.8-4.6 billion in material damage.

Bitar is the second judge to be appointed to investigate the explosion. He was stalled and impeded more than once due to the politicization of the line of questioning and suspects. Bitar charged top security officials, including two members of parliament. Some people were detained, although none carrying the political caliber that is believed to have been directly involved in the case.

Legally hindered from moving the investigation forward, he is currently unable to carry any legal decisions, including summoning suspects or pressing charges. Those detained but cleared are still in custody.

Judge Fadi Sawan had led the initial investigation that resulted in the charge of former caretaker Prime Minister Hassan Diab and three former government ministers with criminal negligence. A complaint was filed, and Sawan was replaced by Bitar in December 2020.

Both judges tried to lift parliamentary immunity in order to legally prosecute former and sitting parliamentarians.

Lebanon is known for its close-knit political network that has been in power for years. The lack of transparent and accountable justice is considered by the people — particularly the victims’ families — as a result of the corruption, mismanagement and malpractice by the ruling elite.

According to the HRW report, senior Lebanese officials are directly implicated in the explosion.

The report details "evidence of omissions and actions by officials that, in a context of longstanding corruption and mismanagement at the port, allowed for such a potentially explosive compound to be haphazardly stored there for nearly six years"

"The very design of the port’s management structure was developed to share power between political elites. It maximized opacity and allowed corruption and mismanagement to flourish," it said. The report concludes that despite evidence implicating senior Lebanese officials "systemic problems in Lebanon’s legal and political system are allowing them to avoid accountability.”

Among the victims of the port explosion were French citizens, which led Paris to open an investigation into the blast. According to an AFP report, a French investigative judge will be arriving in Lebanon on Jan. 23. The visit aims to inquire about the reasons behind Lebanon's public prosecutor's office not giving the French judiciary the data it had requested to support France's ongoing investigation.

In the aftermath of the explosion, the Lebanese elite had vowed to investigate and bring to justice those involved. Nevertheless, they were incapable to allow the investigation to move forward due to domestic and internal political considerations that played a role in highlighting the systemic flaws in the country’s administrative and judicial matters.

The badly damaged grain silos still standing in the Beirut port have been a controversial topic. The government had taken the decision back in April to destroy them. With parts of the silos gradually collapsing, Lebanese authorities have been warning that it could collapse at an accelerated rate.

Families of the victims filed lawsuits to stop the Lebanese government from completing the demolition. Standing as a reminder of what happened, Antonia Hitti, who lost three relatives in the explosion, spoke to The National and said that the silos must stay “until justice is served. Until the investigation is over.”