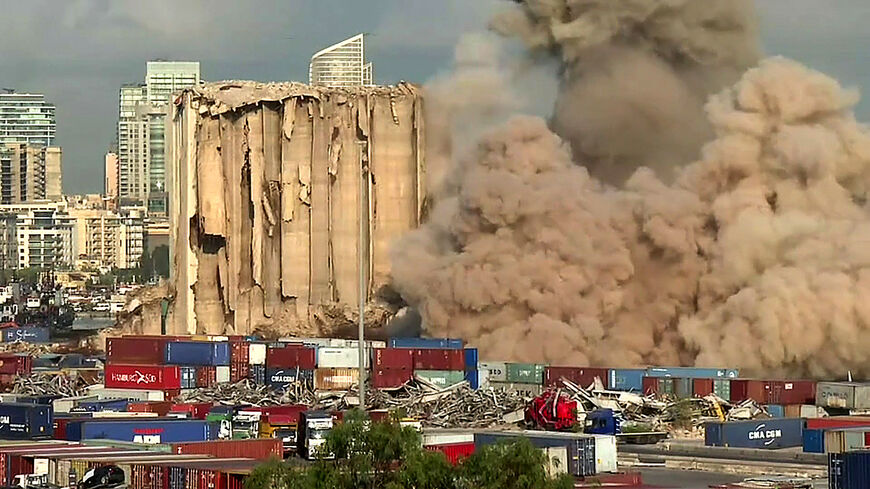 The charges coming on the heels of an economic collapse in Lebanon prompted more protests on Tuesday.

Beirut Judge Tarek Bitar resumed the investigation into the port blast on Monday.

His work was stalled and legally impeded for over a year under political pressure, Al-Monitor reported.

He was unable to carry any legal decisions, including summoning suspects or pressing charges.

Why it matters: Circumstances of the resumption of the investigation are unclear. Bitar met last Monday with French judges visiting Beirut. The French delegation is carrying out an independent investigation into the explosion that killed two French nationals.

Protests have also been taking place in Beirut calling for the release of the 17 detainees and the resumption of the investigation.

In January, families of those who perished in the explosion clashed with riot police, as they tried to enter the Lebanese Justice Palace, holding photos of the victims and calling for an independent judiciary.

According to the judicial officials who were interviewed by The Associated Press, Bitar was able to carry on with his work now based on legal justifications, although the Court of Cassation, the highest in the land, has not yet provided a ruling.

Information about the process and the case seems to be vague, surrounded by uncertainty and a highly political and volatile atmosphere. No one is authorized to speak to the media or disclose information at this point. Those charged have denied wrong doing.

Know more: The Beirut port explosion in early August, 2020, was the result of a large stock of ammonium nitrate that had been inappropriately stored since 2014. Ammonium nitrate is a combustible chemical compound used for agricultural purposes as a high-nitrate fertilizer. It can also be used to create explosives.

The container caught fire leading to several explosions that ravaged the city and entire neighborhoods. More than 215 people were killed and around 300,000 were displaced from their homes, according to a Human Rights Watch report resulting from an independent investigation.

“It wounded 7,000 people, of whom at least 150 acquired a physical disability; caused untold psychological harm; and damaged 77,000 apartments, displacing over 300,000 people,” it read.

The general public sentiment and information from investigations show that senior political and security officials were aware of the ammonium nitrate’s presence and mishandling, but did nothing.

Bitar is the second judge to take the case in December 2020. Judge Fadi Sawan had led the initial investigation that resulted in the charge of former caretaker Prime Minister Hassan Diab and three former government ministers with criminal negligence, he was forced out after complaints of bias by Cabinet ministers.

Both judges tried to lift parliamentary immunity in order to legally prosecute former and sitting parliamentarians. There were recent calls to remove Bitar. If this would happen, it could final blow to the investigation.