Finding solutions: Turkey and the UN are pursuing diplomacy to end Ukraine war while Ankara is considering rapprochement with Syria and mending ties with Israel. 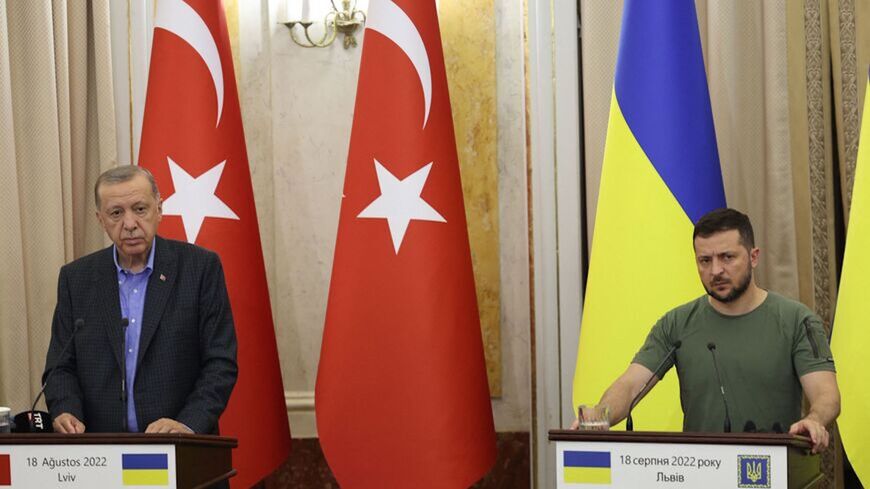 Unemployment is over 10%. Money is running out with Turkey’s occupation of northern Syria costing around $2 billion annually, according to The Financial Times, and the presence of 3.7 million Syrian refugees adding another $40 billion in fiscal burden.

Looking to create some successes to counter the distress, Turkish President Recep Tayyip Erdogan is turning to foreign policy, reviving the "zero problems with neighbors" approach he’d taken before the Arab Spring over a decade ago.

Turkish initiatives in Ukraine, Syria and Israel reveal a foreign policy reset around economic and geostrategic crisis and opportunity.

Erdogan stands out for diplomatic focus on Ukraine

Turkey and Ukraine also signed a memorandum of understanding for Turkish assistance in Ukraine’s reconstruction.

“That the memorandum was signed on the day that the Turkish lira took a sharp plunge against the dollar following the central bank’s surprising decision to cut interest rates has not gone unnoticed on social media," Nazlan Ertan reports.

Erdogan, who “walks a fine line between Russia and Ukraine in the Ukrainian war, met with Russian President Vladimir Putin in Sochi on Aug. 5," Ertan writes. “The two leaders’ statement that they’d further improve economic ties was followed by the Turkish president’s announcement in Ankara that five Turkish banks adopted Russia’s Mir payment system. The Turkish need for Russian gas, cash and tourists  — and Ankara’s unconcealed mirth over its growing economic ties with Russia — has led some European experts to refer to Turkey as a “black knight,” or a nation that helps in the evasion of international embargoes for its own benefit.”

Some of this requires perspective.

Turkey can only be a mediator by maintaining proper relations with both sides. And leaders are always looking out for the interests of their countries. Throughout the Middle East, and indeed most of the East, business and trade with Russia continues. Turkey is hardly an outlier on this score.

But beside Guterres, Erdogan is the only credible world leader putting any energy or initiative into trying to broker an end to the Russia-Ukraine conflict.

While a peace process will ultimately require the backing of the United States and other world powers, Turkey stands out for keeping diplomacy alive in the meantime — including by mediating, with the UN, the Black Sea Grain Initiative, which allowed the resumption of Ukrainian grain and Russian food and fertilizer exports.

And Erdogan still holds one of the most vital cards to be played in the conflict: approval of NATO membership for Finland and Sweden. Erdogan has said it is "out of the question" for the Turkish Parliament to approve their membership unless its conditions are met regarding significant changes to laws and policies dealing with Kurdish groups Turkey considers terrorists.

In Syria, Turkey inches toward rapprochement with Assad

Meanwhile, Turkish Foreign Minister Mevlut Cavusoglu disclosed last week that he had met his Syrian counterpart, Faisal Mekdad, about the need to reconcile opposition forces with Damascus in the context of reaching a political settlement in Syria.

Cavusoglu also revealed that at their meeting in Sochi on Aug. 5, Putin encouraged Erdogan to consider meeting with Syrian President Bashar al-Assad to bury the hatchet.

Putin has long advocated a rapprochement between Damascus and Ankara, viewing it as pivotal to any peace arrangement in Syria. Moscow even facilitated meetings between high-ranking Turkish and Syrian intelligence officials, but with little result.

Erdogan, speaking to reporters en route back from Ukraine, said, “For us, the issue is not about defeating or not defeating Assad,” adding that keeping dialogue channels open with Damascus is “necessary.”

The endgame envisioned by Russia would be a Syrian-Turkish understanding along the lines of an updated Adana Agreement, which restored bilateral ties and put the burden on Syria to crack down on any and all Kurdistan Workers Party activity in Syria.

The Russian president has so far not signed off on a new Turkish military operation into northwest Syria against Kurdish groups based there. Washington has also signaled to Ankara that it would not approve.

Erdogan is seeking to undo de facto Kurdish self-rule in northeast Syria and begin the process of returning 3.5 million Syrian refugees, who are considered a burden and threat by many in Turkey. He wants a wide "safe zone" along the border cleared of the primarily Kurdish Syrian Democratic Forces. A deal with Assad could allow refugees to return to government-controlled areas in the rest of the country as well.

“The argument for peace with Damascus is clearly gaining weight in various echelons of the Turkish state,” writes Fehim Tastekin. “A number of prominent retired diplomats and military officers have long been advising reconciliation with Assad. And even neonationalist quarters that back the government’s belligerent stance against the Kurds have been pressing for peace with Damascus.”

Erdogan’s political calculation and political survival are also part of the mix, write Amberin Zaman and Sultan Al-Kanj. “Presidential and parliamentary elections are set to be held by June 18 next year. The Turkish economy, whose success for long years underpinned Erdogan’s own, is in a free fall. Anti-immigrant resentment is soaring. Random assaults on Syrians are growing common. The opposition says that as soon as it comes to power, it will 'send the Syrians home.' Hence, normalization with Assad 'is a must.' All of this is music to Turkish voters’ ears.”

The biggest hurdle to any reconciliation with Syria may be Assad, who feels vindicated and self-satisfied with the gradual expansion of Syria’s ties with several Arab states. He has insisted on Turkey’s withdrawal from northern Turkey and is unlikely to reconcile with Turkish-backed opposition groups as a condition for peace.

Salih Muslim, co-chair of the Democratic Union Party, which shares power in the Autonomous Administration in North and East Syria, told Zaman, “We have to take these moves seriously because the sides [Assad and Erdogan] are taking their orders from the same place — from Putin.” Muslim added, “The fact they are aligned against the Kurds is no surprise to the Kurds.”

Back to the future in Israel

Tel Aviv and Ankara have also patched up a long-running fractious relationship. “Israel and Turkey are not rekindling their affair, but they have resumed their friendship,” writes Ben Caspit. “There will still be ups and downs, but almost everyone agrees that the Israeli-Turkish reconciliation is here to stay for the foreseeable future.”

The road back included not just top-down diplomacy led by Erdogan and Israel President Isaac Herzog, but “unprecedented cooperation between Israel’s Mossad and its Turkish counterpart in response to intelligence about Iranian assassins sent to Turkey to kill or kidnap Israeli tourists,” Caspit adds.

By restoring ties with Israel, Turkey has found a back door into the potential benefits of the Abraham Accords while complementing its own rapprochements with Saudi Arabia and Bahrain.