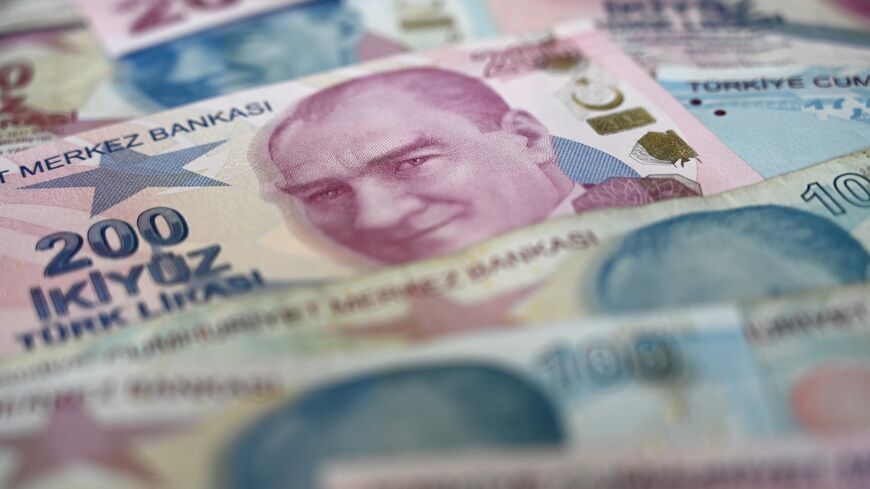 A picture taken on Dec. 7, 2021, in Istanbul shows US dollar banknotes and Turkish lira banknotes. - OZAN KOSE/AFP via Getty Images

The Turkish Central Bank announced another interest rate cut today despite high inflation in the country. The bank lowered its one-week repo auction rate from 14% to 13%, according to a press release.

What it means: The one-week repo auction rate is the interest rate at which the central bank sells securities, such as bonds, and then buys them back later — one week later, in this case.

Why it matters: Inflation is rising across the region, in part driven by the disruptions to the global supply chain resulting from Russia’s invasion of Ukraine. Inflation is especially high in Turkey, where annual consumer inflation reached 79.6% in July.

Many central banks in the region have raised interest rates as a result. Economists generally point out that higher interest rates lower inflation by encouraging saving and discouraging spending, thus leading to drops in prices of goods and services, according to Investopedia.

The Central Bank explained its decision by citing the growth angle.

“It is important that financial conditions remain supportive to preserve the growth momentum in industrial production and the positive trend in employment in a period of increasing uncertainties regarding global growth as well as escalating geopolitical risk,” the bank said in the release.

The bank added that it expects “the disinflation process to start” due to unspecified “measures” the institution has taken. It also mentioned the “resolution of the ongoing regional conflict” — a likely reference to the war in Ukraine. The war is not showing signs of stopping, however.

Today’s monetary decision constitutes somewhat of a reversal. In January, the Central Bank announced it would stop lowering interest rates. However, in June, Erdogan said that rate cuts would continue.

Know more: The value of the Turkish lira against the US dollar has also plummeted in recent months amid Erdogan’s refusal to raise rates. In November of last year, $1 was equal to roughly 10 Turkish liras. In January, the dollar was worth around 13 lira. Today, the lira went up above 18 to the dollar on the back of the Central Bank decision, according to market data.