Turkey and Ukraine sign a memorandum of understanding on reconstruction of Ukrainian infrastructure destroyed by war. 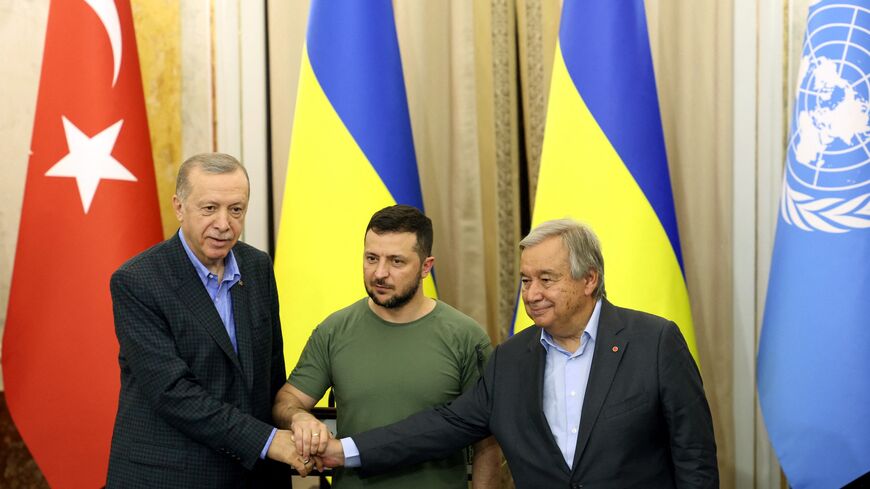 Turkish President Recep Tayyip Erdogan, Ukrainian President Volodymyr Zelensky and UN Secretary-General Antonio Guterres shake hands at the end of their press conference following the talks in the western Ukrainian city of Lviv on Aug. 18, 2022, amid the Russian invasion of Ukraine. - DIMITAR DILKOFF/AFP via Getty Images

The Turkish and Ukrainian presidents and the UN secretary-general came together today in Lviv, Ukraine, with a challenging agenda that includes boosting grain exports from Ukraine and security concerns around Zaporizhzhia, Europe’s largest nuclear power plant located in southern Ukraine.

“The world cannot  bear another Chernobyl disaster," President Recep Tayyip Erdogan said at the presser following the 40-minute trilateral talks, while Guterres warned that damage to the plant would be suicide. Speaking to the press after the meeting, the UN chief said that military equipment and personnel should be withdrawn from the plant.

“The facility must not be used as part of any military operation. Instead, an agreement is urgently needed to re-establish Zaporizhzhia’s purely civilian infrastructure and to ensure the safety of the area,” he said.

Kyiv and Moscow have exchanged accusations since last week on who is responsible for the repeated shellings around the plant that has been under Russian control since March.

Guterres and Zelenskyy agreed Thursday on arrangements on sending a mission from the International Atomic Energy Agency (IAEA) to the plant, the Ukrainian president’s website reported. After the bilateral talks with the UN chief ahead of three-way talks, Zelenskyy warned on Telegram of the “catastrophic consequences” of the Russian aggression for the whole world. “Therefore, the UN must ensure the security of this strategic object, its demilitarization and complete liberation from Russian troops," the Ukrainian president said.

Earlier today, the Russian Foreign Ministry rejected a UN proposal to demilitarize the area around the plant, saying it would make the facility "more vulnerable.”

“The main focus of our tripartite meeting was bringing the war to an end,” Erdogan said, saying that the Istanbul Agreement signed July 27 to establish safe corridors to export Ukrainian grain had shown that Turkey, Russia, Ukraine and the UN could cooperate. “Ever since that deal, 625 thousand tons of Ukrainian grain has reached the global markets,” he said. “We discussed what further steps we can take to boost the current mechanism.”

After the meeting in Lviv, Guterres will travel to Odessa, a Ukrainian Black Sea port that has recently resumed exports of grain following a halt caused by Russia's invasion. He will then travel to the joint coordination center in Istanbul, where senior officers from Russia, Turkey, Ukraine and the UN have overseen the shipments since July 27.

The center is tasked with ensuring the safe transportation of grain and other foodstuffs and fertilizers from three key Ukrainian ports in the Black Sea to the rest of the world. The Turkish Defense Ministry said more than 620,000 tons of grain have been shipped from Ukrainian ports since the deal, starting from Razoni, which arrived in Istanbul for inspection on Aug. 2.

Erdogan, emboldened by Turkey’s role in securing a recent deal that allowed for the restart of grain and fertilizer exports, maintained that Turkey can mediate in ending the war, which is nearing its sixth month. “I think we can continue the diplomatic efforts based on the parameters we had agreed to in Turkey last spring,” he said. “Turkey is ready to play the role of mediator.”

He also signaled Turkey’s desire to help the reconstruction of war-ravaged Ukraine. During the visit, the two countries also signed an agreement on the reconstruction of Ukrainian infrastructure that was destroyed by war. The memorandum of understanding was signed by Ukrainian Minister of Infrastructure Oleksandr Kubrakov and Turkish Trade Minister Mehmet Mus. Ukrainian sources said that the first major piece of infrastructure rebuilt would be a bridge connecting Bucha and Irpin destroyed at the beginning of the Russian invasion.

The fact that the memorandum was signed on the day that the Turkish lira took a sharp plunge against the dollar following the central bank’s surprising decision to cut interest rates has not gone unnoticed on social media. Le Chou News, a European satirical site, posted a photo of the two leaders with the ironic headline, “Erdogan asks for Ukrainian financial aid to help Turkey’s failing economy.”

Erdogan, who walks a fine line between Russia and Ukraine in the Ukrainian war, met with Russian President Vladimir Putin in Sochi on Aug. 5. The two leaders’ statement that they’d further improve economic ties was followed by the Turkish president’s announcement in Ankara that five Turkish banks adopted Russia’s Mir payment system. The Turkish need for Russian gas, cash and tourists — and Ankara’s unconcealed mirth over its growing economic ties with Russia — has led some European experts  to refer to Turkey as a “black knight,” or a nation that helps in the evasion of international embargoes for its own benefit.

But Erdogan insists that Ankara has never wavered in its support of Ukraine. “We have sent 98 trucks of humanitarian aid to Ukraine since the beginning of the war and hosted Ukrainian refugees,” he said. He made no reference to the Bayraktar killer drones that Turkey sold to Ukraine shortly before the war started.