Defense Minister Hulusi Akar has said the agreement to ship Ukrainian foodstuffs could be a stepping stone toward peace. 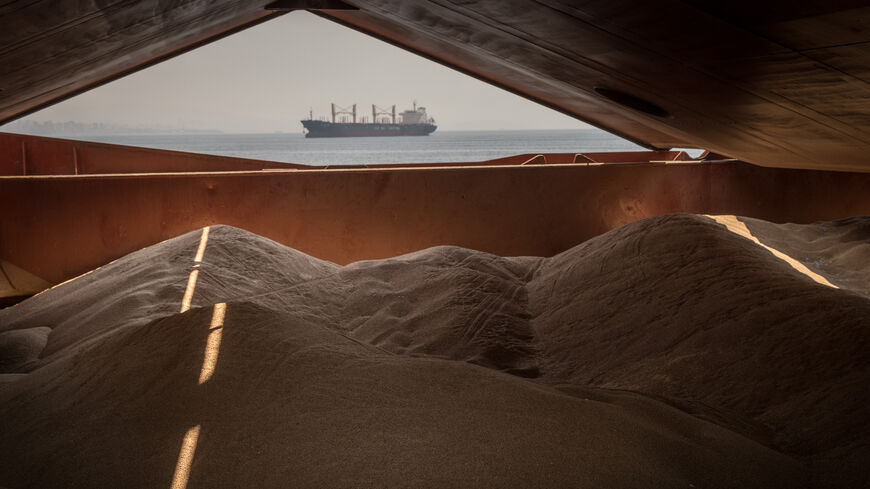 Piles of grain are seen on board the Osprey S vessel anchored in the Marmara Sea during an inspection by representatives working with the joint inspection team on Aug. 18, 2022, in Istanbul, Turkey. - Chris McGrath/Getty Images

ISTANBUL — Flushed with the success of the Ukrainian grain shipment deal it helped negotiate, Turkey is hoping to eventually translate its position as a mediator between Kyiv and Moscow into a peace agreement.

Defense Minister Hulusi Akar hosted UN Secretary General Antonio Guterres in Istanbul over the weekend. The UN chief was given a tour of the Joint Coordination Center running the shipments of grain and other foodstuffs from Ukraine’s Black Sea ports.

Speaking at a news conference on Saturday, Akar stressed Ankara’s desire to further expand cooperation on grain shipments with the aim to “prepare the ground for a permanent peace environment,” adding that “while these needs are being met," "we think that we must think about peace.”

His remarks were backed by Guterres, who said he hoped the “extraordinary spirit of commitment” at the center, which is run by officials from the UN, Turkey, Ukraine and Russia, would result in a “complex [and] lengthy process in which we all would like to see peace triumphing.”

The first shipment left Odessa on Aug. 1 under a deal brokered by Turkey and the UN that allows for the export of some 22 million tons of grain held up in Ukrainian silos by the war.

Over the last three weeks, 656,349 tons of agricultural products have left Ukrainian ports on 27 ships, Akar told journalists. Another 24 vessels have been allowed to pass through the Bosporus to collect cargo from Ukraine. “We anticipate that this number will continue to increase,” he said.

Turkey’s stance following Russia’s invasion in February has caused concern among the countries that imposed sanctions on Moscow. Ankara has close relations with both Russia and Ukraine.

The decision not to join the sanctions regime alarmed Western allies and fears were compounded earlier this month when President Recep Tayyip Erdogan and Russia’s Vladimir Putin pledged to expand cooperation on trade and energy.

Washington has also warned that Russians are trying to use Turkey to evade sanctions, a message that was reinforced by US Deputy Treasury Secretary Wally Adeyemo in a phone call with Turkish Deputy Finance Minister Yunus Elitas over the weekend.

Despite these issues, Turkey feels its position has been vindicated by the success of the grain shipments. During a visit to Lviv by Erdogan and Guterres last week, Ukrainian President Volodymr Zelenskyy praised Turkish support for his country. “The visit of the president of Turkey to Ukraine is a powerful message of support from such a powerful country,” he said.

Erdogan, meanwhile, said Turkey would continue diplomatic efforts to end the fighting. “While continuing our efforts to find a solution, we remain on the side of our Ukraine friends,” he added.

Turkey’s role as a mediator in international affairs can be traced back more than a decade, according to Ozgur Unluhisarcikli, director of the German Marshall Fund in Ankara. It brokered indirect peace talks between Syria and Israel in 2008 but a deal was scuttled by Israel’s invasion of Gaza. Ankara, which has a history of military cooperation with Israel, had previously acted as an intermediary between the Jewish state and the Arab world.

“Even before this war started, the Turkish Foreign Ministry had a vision of Turkey establishing itself as a mediating state in the world,” Unluhisarcikli said. “When this war started, Turkey’s policy was defined as mediation and that was in line with the expectation of the Turkish people. It also serves Turkey’s policy of trying to remain neutral in wars in which it is not one of the belligerent parties and serves its balanced approach. That has been Turkey’s overarching policy in the Russia-Ukraine war.”

This policy saw Turkey host talks between Russia and Ukraine. In March, their respective foreign ministers met in the Mediterranean city of Antalya, followed by talks between officials in Istanbul at the end of the month.

Although neither meeting produced any concrete steps, the July 22 grain agreement shows Turkey’s persistence can pay off.

“The grain deal is a successful mediation effort by Turkey and the UN,” Unluhisarcikli said. “It is only natural that Turkey would like to build on this. It may not be soon but once the conditions are right for negotiations for peace, I think Turkey is one of the likely places where the parties will meet.”

While a conclusion to the war seems a distant hope, Turkey’s role as a middleman could be extended to other areas of the conflict.

“In the intermediate period there could be other talks on prisoner exchanges, on the conduct of the fighting, for example, where Turkey provides a platform,” Unluhisarcikli added.