The Palestinian Minister of Transport and Communications confirmed the imposition of measures and penalties against travelers through Israel's Ramon Airport. 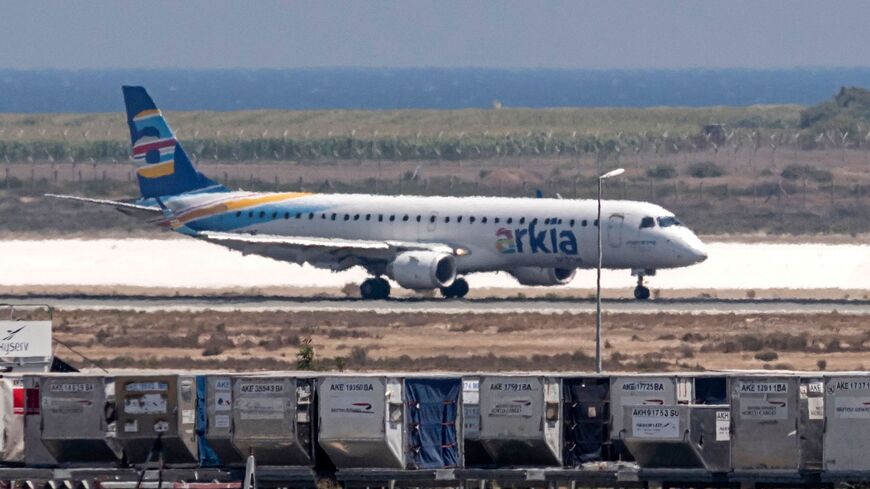 A plane of the Israeli airline Arkia, carrying 40 Palestinians aboard the first flight from Israel's Ramon Airport, lands at Larnaca International Airport in Cyprus on Aug. 22, 2022. - IAKOVOS HATZISTAVROU/AFP via Getty Images

GAZA STRIP — The Palestinian Ministry of Transportation has threatened to take punitive measures against Palestinians who use Ramon Airport in southern Israel for travel, with the first flight for Palestinians scheduled through the airport to Turkey before the end of August.

Palestinian Transportation Minister Assem Salem confirmed during a radio interview on Aug. 16 that he will raise some suggestions and measures that can deter Palestinians from traveling through Ramon Airport, noting that there is no contact between the Palestinian government and Israel regarding Palestinian travel through the airport.

Israel officially announced its approval on Aug. 2 to allow Palestinians from the West Bank to travel through the airport. The first flight took off on the morning of Aug. 22 from the airport toward Cyprus; it included 24 Palestinians from Bethlehem and Hebron, and the Israeli newspaper Yedioth Ahronoth described it as a "historic step."

Spokesman for the Palestinian Ministry of Transportation Musa Rahal told Al-Monitor that his ministry has not yet approved any punitive measures against Palestinians who will travel through the airport, pointing out that these measures — which he refused to disclose — will be discussed in the upcoming Palestinian Cabinet meetings.

Rahal explained that all their steps until this moment have focused on advising Palestinians who wish to travel through the airport to reconsider, as this is part of Israel's attempts to show the world it is helping Palestinians. But, in fact, Israel only wants to save the airport, which has not been used by travelers to and from Israel since it opened in January 2019.

He stressed that they refuse in principle to use the airport for travel because it contradicts the principle of Palestinian sovereignty. He called on Israel to allow them to operate the Palestinian Qalandia Airport north of Jerusalem, which was closed by Israel with the outbreak of the intifada in 2000.

Well-informed sources in the Palestinian Ministry of Transportation told Al-Monitor on condition of anonymity that among the steps that are being discussed and will be submitted to the Palestinian Cabinet for approval is to prevent every citizen who uses Ramon Airport to travel from renewing their Palestinian passport.

The sources pointed out that Israel has recently tried to push Palestinians to use the airport by approving a number of restrictions on Palestinian travelers through Al-Karama crossing that connects Jordan and the West Bank, due to the careful inspection and security investigation that the majority of Palestinian travelers are subject to. They have to pass through three stops to cross into Jordan. The first is Palestinian, the second is Israeli and the third is Jordanian.

The sources indicated that the time period needed by Palestinian travelers through Al-Karama crossing toward Queen Alia International Airport in Jordan is the same as the time needed to travel to Ramon Airport.

The sources revealed that Israel is promoting, through Israeli media, that the registration of Palestinian travelers to travel through the airport will be through the travel and tourism offices in the West Bank, which will transport passengers by buses to the Israeli Mitar checkpoint, south of Hebron, and from there directly to Ramon Airport.

Al-Monitor recently monitored an increasing desire by some Palestinians in the West Bank to travel through Ramon Airport, which was reflected on social media platforms. They thought that traveling through the airport would save them from the suffering they undergo through Al-Karama crossing. Besides, the tax will be paid to the Israelis only once at the airport. Travelers through Al-Karama crossing have to pay the tax three times at the three stations, not to mention a tax at Queen Alia Airport.

Talal Al-Tamimi, director of One Travel for tourism and travel in Hebron, confirmed in an interview with Al-Monitor that they receive dozens of calls daily from Palestinian citizens who wish to travel to Turkey through Ramon Airport, but so far they have not registered any request.

He revealed that the Palestinian Ministry of Transportation held a meeting for tourism and travel companies in Hebron and Bethlehem on Aug. 15, officially informed them of banning any requests to travel through Ramon Airport and warned them that any company that would do so would be liable.

The Palestinian Authority, which sees that the move to allow Palestinians to travel through Ramon Airport undermines its sovereignty, aims through its measures to prevent Palestinians from traveling through the airport to maintain its relations with Jordan. Jordan is the main outlet for the Palestinians in the West Bank around the world, not to mention that it is one of the largest political supporters of Palestinians.

Jordanian tourism companies have expressed their concern about this step, which will incur heavy losses on the Jordanian tourism sector and may push some companies to close, especially transport companies that work to transport Palestinians from Al-Karama crossing toward Queen Alia International Airport, as well as the hotel sector.

Approximate tourism statistics indicate that around 2.5 to 3 million Palestinian passengers travel through Al-Karama crossing annually, 2 million of whom use Queen Alia International Airport in Amman to travel to various destinations around the world.