It’s been seven months since the festive inauguration of the Ramon Airport, which despite its hefty price tag, has failed to meet anyone's expectations. 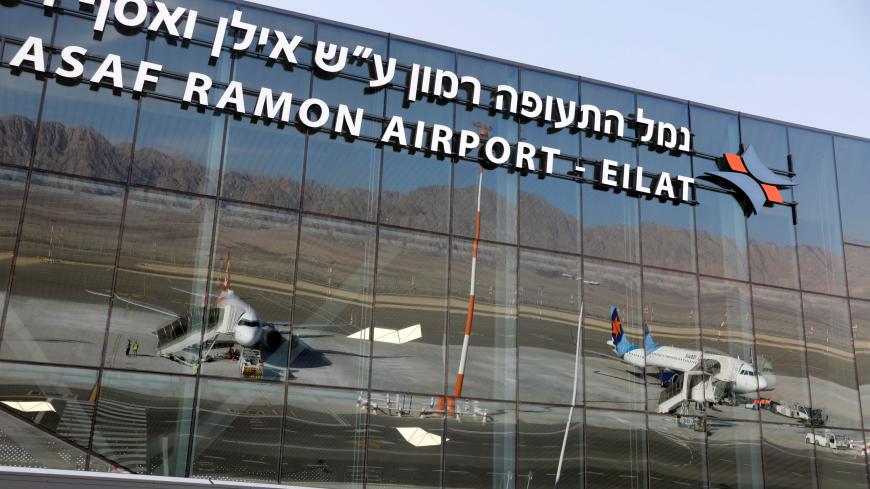 Planes are reflected in the facade of the Ilan and Asaf Ramon Airport after an inauguration ceremony, near the southern Red Sea resort city of Eilat, Jan. 21, 2019. - REUTERS/Ronen Zvulun

Last June, I set out to visit one of the settlements in the southern Arava region. At first, I thought I would drive, but then I found a cheap flight from Ben Gurion International Airport to the new Ilan and Asaf Ramon Airport, named after the Israeli astronaut and his pilot son, respectively. I had never been to Ramon, opened in January some 12 miles north of Eilat, and I could never have imagined what I found when I stepped off the plane there: a barren wilderness, screaming to the heavens, and vast aircraft stands devoid of planes. The desert silence only intensified the sense of strangeness.

When I got to the baggage carousel, the feeling that this was all a farce grew even stronger. The airport — built over five and a half years at a cost of 1.8 billion shekels (half a billion dollars) — was for all intents and purposes empty. A custodian wandering the halls with his cleaning equipment was the loudest thing there.

Ramon is Israel’s second international airport, but that is only its part-time job. International airlines only operate flights from Europe to Eilat in the winter, when Eilat’s weather and cheap prices are attractive to tourists. The airport is all but empty in the summer, when it mainly services domestic flights.

The stated purpose of the airport is to connect the center of the country to the distant south and serve the Zionist ethos of “making the desert bloom.” At the facility's festive inauguration on Jan. 21 in the presence of the Ramon family, Prime Minister Benjamin Netanyahu proclaimed, “The Zionist vision is being realized.” He went on to promise that the new airport would bring “further momentum, enormous in scope, to the Negev, the Arava, and the city of Eilat, and that it would cause the Negev to blossom.” Seven months later, however, Netanyahu’s promise seems almost ridiculous.

According to a report released Aug. 4, there has been a 19% decline in the number of flights from Ben Gurion International Airport to Ramon this year, compared to the same period last year. Uri Sirkis, general manager of Israir Airlines, told Al-Monitor that the real figure is 25%. In May, Nir Dagan, general manager of Arkia Airlines, had called Ramon airport a “failure,” remarking, “People who pass through it once don’t want to pass through it again.” On July 21, The Marker quoted a general manager of a car rental service as saying that the company’s representative at the airport spends most of the day “counting birds.”

R., a pilot who flies the Ben Gurion-Ramon route and who requested anonymity, told Al-Monitor, “Ramon Airport is an airport without a future. The reason for this is very simple: There is no reason to use it. Airlines sell time, but this airport won’t save anyone time.”

R. further explained, “After they closed two airports this year — the airport in Eilat and Sde Dov in Tel Aviv — and they moved the takeoff and landing strips, this airport has very little to offer. When calculating time from door to door, it isn’t worth it to fly to Eilat from the center of the country. People would get there faster by car, and if it’s a family, it will end up being cheaper too.”

R. is critical of the Israel Airports Authority, which, he claims, has not prioritized flights to Eilat as originally promised. “There is no preference for flights to Eilat,” the pilot complained. “Someone flying in from Europe once a season is nothing like a local resident of Eilat who comes home after spending the day taking care of business in the north. Last week, I waited on line for 50 minutes, just to take off, when the flight itself lasts just 32 minutes. That flight made it clear to the passengers why this whole story isn’t worthwhile.”

Sirkis offered a different perspective. “Right now, the situation isn’t very good,” he admitted. “But this is the direct result of an aggressive campaign against the closure of Sde Dov Airport that convinced people that Ben Gurion Airport is a poor alternative. Add the fact that we are in the middle of the most-crowded season at Ben Gurion Airport, which really doesn’t make it easier for passengers. Then there is the problem of image, which comes with trying to sell Ben Gurion [also] as an airport for internal flights. These are just the birth pangs. I am sure we will get over them.”

Sirkis is convinced that people will turn to using Ramon for domestic flights. “I’m sure we’ll see a significant improvement by wintertime and another improvement next season, and we’ll see even more improvement the season after that,” Sirkis asserted. “The drive to Eilat is difficult. The roads are dangerous, and driving in a car for four hours with kids means that the kids lose patience. No one wants to go through that again. Our product will win out in the end because it offers a better experience, and that experience will continue to improve.”

For Neri Yarkoni, an aviation expert, Ramon is a mixed bag. “We need to tell the truth,” he said to Al-Monitor. “Ramon was not planned to be Eilat’s airport. Eilat is not attractive to tourists. The shekel is too strong, and the product isn’t good enough.” He also said that the airport is irrelevant for internal tourism. “It is about a 300-kilometer [186-mile] drive from Tel Aviv. No one flies distances like that.”

Still, Yarkoni believes that Ramon might resolve the problem of aviation noise at night at Ben Gurion. “As of today, it makes no sense how crowded Ben Gurion Airport is at night,” he said. “Normal countries don’t know anything like that. Ben Gurion Airport is most crowded at 3:00 a.m. It is a nuisance for a million and a half people. Hundreds of thousands of people can’t sleep because of it. Ramon Airport can solve that problem. Over there, the ‘aerial train’ at night won’t disturb anyone. We could have shuttles from Ben Gurion to Ramon. If airport taxes were lowered and flights subsidized, many would prefer to save some money and fly at night from Ramon.”

So far, it looks as if the great hope of aviation authorities for the new airport is international flights. The Ministry of Tourism decided to encourage foreign airlines to fly to Eilat in the winter, when occupancy at the city’s hotels is low. As incentives, it offered grants of 60 euros per arriving passenger, foreign or Israeli, in addition to exemptions for airport costs and fees. The ultimate was Israir Airlines offering flights to Eilat for just one euro from several destinations in Europe. Sirkis said he is currently promoting package deals to various European airlines, which will include flights from Eilat to several nearby destinations.

“They put an airport here for a ridiculous amount of money, and now they will do everything to justify that,” said R., the pilot. “It would be different if there were some strategic objective, but economically, I just don’t see this airport taking off. Large numbers of international flights will not be landing here. Eilat really can’t compete with prices in Sharm al-Sheikh or Aqaba. Now, all the wise men are busy figuring out how to extricate a rock that some fool, or perhaps several fools, threw down a well.’’