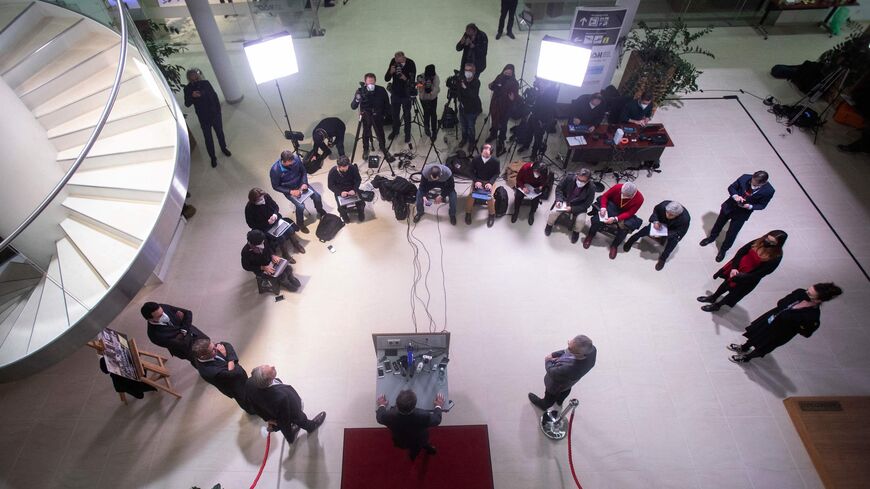 Director of the International Atomic Energy Agency Rafael Mariano Grossi (C) addresses the media after his arrival at the Vienna International Airport, in Schwechat near Vienna, Austria, on March 5, 2022. - ALEX HALADA/AFP via Getty Images

According to Iran’s Foreign Ministry spokesperson Nasser Kanani, lead Iranian nuclear negotiator Ali Bagheri Kani will depart today for Vienna for negotiations to revive the Iran nuclear deal, the Joint Comprehensive Plan of Action (JCPOA). He will be accompanied by a delegation of Iranian negotiators.

American negotiators as well as EU coordinators will also be in Vienna to help revive the deal, which the United States left in 2018. The two sides will discuss the latest EU proposal for Iran and the United States compromise on outstanding issues. The US exit led to reapplied sanctions that limited Iran’s ability to sell its oil and conduct banking transactions. In response, Iran increased its enrichment to 60% and removed cameras the International Atomic Energy Agency was using to monitor its facilities.

According to conservative Iranian politician Javad Karimi-Ghodousi, the latest recommendations by the European Union to bring Iran and the United States closer to agreement “showed softness towards some of Iran’s demands and [indicate the United States and European Union] have adjusted their positions.” He told the Iranian press that Tehran is still reviewing the recommendations and will present its conclusions soon.

As negotiators travel to Vienna, it is not clear if they are headed directly into another round of talks or if the EU recommendations will be the first point of discussion.

Karimi-Ghodousi said that a new round of talks would likely start after the Tasua and Ashura religious events, which fall on Aug. 7 and 8, respectively, and that “one or two issues related to sanctions” remain unresolved. One of them is that if the sanctions are reinstated on Iran, the United States expects foreign companies who have invested in Iran to immediately leave, whereas Iran believes the companies should be allowed to complete their contracts. This point is significant for Iran because under a Republican president, the United States is likely to leave the deal once again.

He continued that the United States appears to be open to Iran’s position. However, given the nature of US sanctions on Iran through the Treasury Department, it is not clear how a current president can tie the hands of a future president without congressional approval for a treaty, something President Joe Biden will certainly not be able to achieve.

A State Department spokesperson told Al-Monitor the United States had “been prepared to close a deal and immediately begin reimplementation based on the outline on the table since March. High Representative [Josep] Borrell's latest proposal, which he described as the best possible outcome, is based on the March text."

The spokesperson stressed that in order to close a deal, “Iran will have to drop demands that are extraneous to the JCPOA. We hope that will be the case, though at this stage our overall expectations remain low.”

Nevertheless, the US had “responded positively” to Borrell’s invitation to Vienna, “as we believe it is important to support his efforts.”

According to most observers, if the latest recommendations by the European Union are not approved by both sides, the 2015 JCPOA would essentially be dead, and Iran’s enrichment advances and continued US sanctions would make it difficult to ever return to the deal. Biden campaigned on returning to the JCPOA but if he is unable to achieve it, it seems unlikely another president would risk the political costs of trying again.