Hamas' lack of participation in the last round of fighting has further cracked the shaky relationship between it and Islamic Jihad, although the two movements deny being on bad terms. 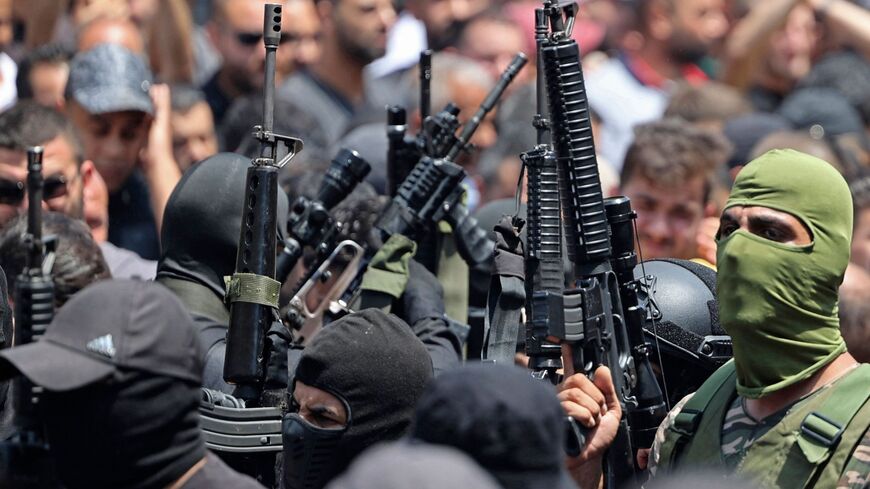 Palestinian militants take part in the funeral procession of Hussein Taha, who was killed in an Israeli raid, in the West Bank city of Nablus on Aug. 9, 2022. The latest violence comes two days after deadly fighting between Israel and Islamic Jihad militants in the coastal enclave of Gaza was halted by a truce. - JAAFAR ASHTIYEH/AFP via Getty Images

The news claimed Islamic Jihad was discontented with Hamas for not fighting along its side in the latest round. No official position or statement is issued so far about this supposed discontent.

However, Israeli statements confirming it had sent messages through mediators to Hamas reassuring it that it was not the target of this round and that it will not be harmed if it doesn't interfere further corroborated the rumors.

The leaderships of the two Palestinian movements deny any rupture or rift between them. Hamas political bureau member Mahmoud al-Zahar told Al-Monitor, “Israel has failed miserably in achieving this rift. If there was a dispute between the two movements, this would have been [officially] reported by the media or in the statements of officials. On the contrary, Hamas leaders participated in funeral gatherings of Islamic Jihad leaders and gave speeches emphasizing the unity of the resistance. The two movements only disagreed on the timing of the battle against Israel.”

He added, “The last battle must be assessed objectively by the Islamic Jihad movement away from any other considerations, given the resistance's need to agree on the final and strategic goal. We do not want a war every year or two, because this means that Israel will drain our military and human energy.”

Zahar noted, however, that “this battle was imposed on Islamic Jihad, and the resistance will deduce lessons from what happened. All factions participated in the Sword of Jerusalem Battle (in reference to the 11-day conflict in Gaza in May 2021), which enjoyed popular support.”

Regarding the need for dialogue between the resistance factions to draw up a unified strategy for taking the decision of war and starting battles, Zahar said, “Each faction should have a clear stance on this matter. Hamas’ position on a unified strategy is clear. The Palestinian street wants to have unity, whether regarding armistice or confrontation. This was the case during the Sword of Jerusalem Battle, which achieved a satisfactory outcome.”

On Aug. 13, Saudi Al-Sharq reported a “disagreement" between the two movements after the last war, quoting an anonymous source in Islamic Jihad as saying that the joint operation room of the factions “no longer exists” after Hamas’ refrain from taking part in the latest confrontation.

The website also quoted another anonymous source from Hamas as saying that "the goal that the Islamic Jihad movement set behind this confrontation was not acceptable. You cannot spark an armed confrontation with Israel from Gaza because a person was arrested in the West Bank, regardless of his political position.” The source noted that the Islamic Jihad threatened Israel of bombing without consulting with Hamas in a bid to appear as the "spearhead" of the armed resistance in Gaza.

Speaking to Al-Monitor, Islamic Jihad's media chief Daud Shehab denied the above report. “Relations with Hamas have not been severed. After the aggression, there was contact between the movement's Secretary-General Ziad al-Nahhal and the head of Hamas' political bureau. Meetings between the leaders of the two movements in Gaza and in Beirut have not stopped,” he affirmed.

Shehab indicated that “the report published by the Saudi newspaper expresses the wishes of some anti-resistance media quarters. Channels of communication are wide open between the two movements at all levels. It is only natural that the two movements' views differ on some issues and details, but all disagreements are subject to constructive and purposeful discussion. The movements are still coordinating and cooperating. Hamas’ relations with other forces and factions are within their natural context. Palestinian-Palestinian relations are being targeted. After years of intense efforts and attempts to isolate the Palestinian people from their Arab and Islamic surroundings, the focus is now on nurturing the internal Palestinian differences.”

He continued, "Disagreements and discussion are normal and an important phenomenon that the forces could leverage. But there are attempts led by agencies linked to Israel to stir confusion and undermine the popularity of the resistance. The factions are well aware of these attempts. We know the difference between a constructive political discussion and attempts to offend the resistance and undermine the consensus around it.”

Hassan Lafi, a political analyst and writer, told Al-Monitor that Israel was unable to achieve its goal of stirring a rift within the Palestinian resistance, especially between Hamas and the Islamic Jihad.

He explained that the “joint operations room of the resistance is a coordination room and is not mandatory for the factions. It has not turned into a command center that leads the resistance, even if this was its ultimate goal. There is no rift between the two movements, they just have different viewpoints and assessments of the situation. Yet there is a need for a constructive discussion within the joint room.”

Lafi pointed out that local news circulated in the Gaza Strip after the aggression about a serious meeting between Al-Quds Brigades, the military wing of the Islamic Jihad, and Al-Qassam Brigades, the military wing of Hamas, during which the two sides' views were clarified in a positive atmosphere. “Everyone knows that Israel’s objective is to take down the resistance,” he said.