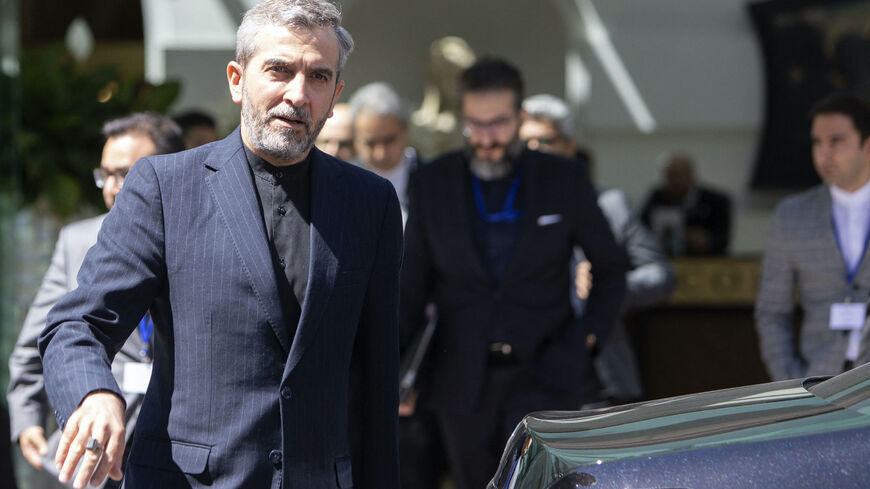 The resumption of talks to revive the Iran nuclear deal was the breakthrough of this week.

The signatories to the Joint Comprehensive Plan of Action (JCPOA) had not met in Vienna in nearly six months.

Multiple diplomatic sources in Vienna told Al-Monitor today there’s no deadline to reach a deal. “Talks will continue as far as there is progress, and there’s progress,” said one diplomat.

In Vienna, indirect meetings are taking place around the clock at the famous Coburg Palace. The European Union’s special coordinator, Enrique Mora, is conveying messages between the Iranian and US delegations.

In public, the demands are general. Iran wants sanctions lifted and is asking for guarantees that it would benefit economically. However the main issue on the table is the International Atomic Energy Agency's safeguards, and Tehran is demanding that the IAEA end its investigation into suspicious Iranian nuclear activities at three sites.

On Dec. 15, 2021, Iran and the IAEA reached an agreement to work on the remaining outstanding safeguard issues at three locations where the IAEA suspects activities of concern. Under the agreement, Iran’s domestic atomic energy organization promised to provide written explanations and supporting documents on the three sites.

An Iranian source told Al-Monitor, “During the last time in Vienna there was an agreement that the IAEA will send questions to Iran, there’ll be answers, there’ll be a report and then the E3 [France, Germany and the UK] and the US will give a statement to the IAEA, then the issue will be resolved.”

The source accused the US and the E3 of doing the opposite. “They gave a negative statement on Iran and that should be resolved in the current talks."

An EU source confirmed to Al-Monitor that the focus currently is on solving this problem. However, he downplayed the Iranian source's comments about the previous agreement in Vienna as made for a domestic audience.

Iranian President Ebrahim Raisi made several phone calls Friday to the presidents of Russia, China and France. The deputy chief of staff for Raisi, Mohammad Jamshidi, tweeted that “it was his firm position that ONLY when the so-called Safeguard Issues [are] resolved & closed, can the final agreement be achieved.”

On Thursday, as delegations started to meet, Iran’s official news agency IRNA quoted a well-informed source denying “media reports that the IRGC issue no longer on the table.” The IRGC has been a hurdle for the past few months, but as of May, Iran has been downplaying it. Mohammad Marandi, an adviser to Iran’s negotiating team, explained to Al-Monitor that while removing the IRGC from the US list of terrorist organizations "isn't and never was a prerequisite for a deal, that doesn't mean it's off the table.” Marandi added that claims that “Iran demands non-JCPOA related concessions is Western myth-making.”