As Washington and Tehran make small progress on resolving their dispute over the 2015 nuclear deal, it remains unclear whether Iran's supreme leader Ayatollah Ali Khamenei will support President Hassan Rouhani's efforts to negotiate. 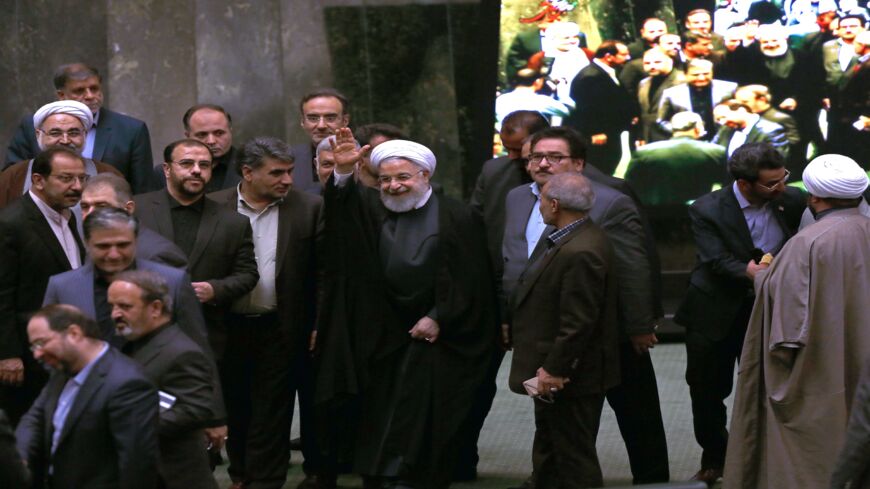 Iran's President Hassan Rouhani (C) arrives to address parliament in the capital, Tehran, on Sept. 3, 2019. In the address, he ruled out holding any bilateral talks with the United States, saying the Islamic Republic is opposed to such negotiations in principle. He also said Iran was ready to further reduce its commitments to a landmark 2015 nuclear deal "in the coming days" if current negotiations yield no results by Sept. 5. - ATTA KENARE/AFP via Getty Images

As Iranian President Hassan Rouhani prepares to leave office in a few months’ time, a significant breakthrough has been made on the nuclear deal front. Officials from Iran and its partners in the Joint Comprehensive Plan of Action (JCPOA) — the formal name for the Iran nuclear deal signed in 2015 — met virtually on April 2, paving the way for another meeting in Vienna, in person, on April 6. According to Iranian Foreign Minister Mohammad Javad Zarif, the meeting’s aim is to “rapidly finalize sanction-lifting and nuclear measures for choreographed removal of all sanctions, followed by Iran ceasing remedial measures.”

A Western diplomatic source told Al-Monitor that the meeting on April 6 was coordinated through a back channel and not during the video conference, without providing more details.

The gathering in Vienna will be the first since US President Joe Biden came to power. However, according to statements issued by the United States, the European Union and Iran, there’ll be no direct engagement between Iranian and American officials. A US delegation will be in Vienna, yet they plan to meet separately with the EU coordinator to “clearly identify sanctions lifting and nuclear implementation measures, including through convening meetings of the relevant expert groups,” according to a statement issued by the EU.

In principle, this could be seen as a positive development. However, in the context of the nuclear standoff, this could be a recipe for another dire failure. In Tehran, the margin the Foreign Ministry and the government had a few months ago is vanishing gradually. This is due to two factors. The first is the forthcoming presidential election and the fact that, according to a source close to the country’s supreme national security council, “The country and a new government doesn’t have to live with the shortcomings of an agreement that could be negotiated on better terms.” The source, who asked not to be identified, told Al-Monitor, “The decision to engage with the world powers is strategic, but Iran already did its part of the deal and it’s time that the other parties abide by their commitments.”

The second factor is that Iran’s supreme leader, Ayatollah Ali Khamenei, is this time decisive about not accepting any step that doesn’t meet his announced red lines — namely Washington lifting all sanctions and Iran verifying and receiving guarantees that what happened in May 2018, when former US President Donald Trump announced his country’s withdrawal from the deal, won’t be repeated.

“Ayatollah Khamenei’s position is clear. The Americans have to implement what they committed themselves to; otherwise, it's a dead end and we'll just move on,” stressed Iranian University professor Mohammad Marandi in an interview with Al-Monitor. Marandi thinks that despite the fact Iran has suffered a lot under the US sanctions, the sanctions system has started falling. “Iran is gradually finding ways to circumvent [sanctions] and, while life is difficult, it's not like it was a couple of years ago. So Iran is definitely not desperate,” he said. Marandi added that since “the United States is weaker today than it was before, and relatively speaking — ironically because of the sanctions — the Iranian economy was not hit as hard as other economies by the coronavirus; thus, Iran’s position is stronger today than it was two, three or four years ago.”

It’s clear that on the top of the establishment in Tehran, there’s a feeling that finalizing an agreement isn’t an urgent issue if the prerequisites aren’t met, because any agreement with the United States in particular will have to face its first serious challenges in a few months, given the fact that the conflict gap between the two countries is wider than can be bridged. Therefore, Khamenei is seeking guarantees so that when other subjects rise for discussion, Tehran won’t have to respond or talk under the threat of another wave of sanctions.

“Iran is not in a hurry to come back to the table,” said Amin Mohseni-Cheraghlou, an assistant professor of economics at American University in Washington. Mohseni-Cheraghlou has built his argument upon several elements. He explained to Al-Monitor that while “Iran’s economic crises have more to do with decades of poor economic policies and less with sanctions,” the country is in a much better position today to cope with sanctions than it was two years or six years ago. He added that “when faced with unilateral and tougher sanctions which were against the JCPOA, it was only natural for the Iranian government and its close trading partners and allies to actively identify and develop ways and processes to circumvent the US-imposed sanctions on Iran on a daily basis.”

Mohseni-Cheraghlou argued that, based on the JCPOA experience, “temporary removal of sanctions could hurt the Iranian economy, as it will expose the channels, processes and infrastructures that Iran and its allies have developed to evade US sanctions.”

The above could be seen as an additional factor besides the first two to consider when it comes to the future of the negotiations, especially under the auspices of the current government in Tehran.

“There's always a possibility that we return to the deal before the end of this administration, but it's very unlikely,” predicted Marandi. He said Biden wants to pursue the same policy as Trump, “in other words, to violate the deal in order to use it as leverage to get new concessions. But the Iranians didn't appease Trump and they're obviously not going to appease a much weaker Biden.”

A well-informed source in Tehran revealed to Al-Monitor that France offered to mediate and carry messages between the Americans and the Iranians during the Vienna meetings. According to the same source, prior to the video conference on April 2, the US offered to release $1 billion worth of Iranian assets in Iraq or South Korea in exchange for the cessation of the 20% enrichment as well as shutting down the advanced centrifuges, but the offer was turned down.

But Rouhani is still hopeful of reaching a reconciliation with the new administration in Washington before he departs. He wants to be remembered as a former president with at least one success — one that he promised during his first-term presidential campaign eight years ago. Back then, another president was serving his last few weeks in power, and a team from his government was in Oman, without his instructions, to pave the road for the next government to reach an anticipated deal on the country’s disputed nuclear program. Back then, just as today, one man was in charge of the big decisions, namely Khamenei.

An Iranian political source speaking on condition of anonymity told Al-Monitor that many attempts were exerted to get to Khamenei’s ear through mediators. “It’s not clear till the moment whether any made progress, but the leader doesn’t want to encourage any exchange on this subject before the other side abides by their commitments,” he said. According to the source, the ayatollah “made it clear to all our officials not to get in touch with any American [they] know. It doesn’t matter how much they trust them; this is not the time for unnecessary conversations that might send wrong messages.”