On the anniversary of the death of former IRGC commander Qasem Soleimani and with the resumption of the nuclear talks in Vienna, Iran stakes out a hard line. 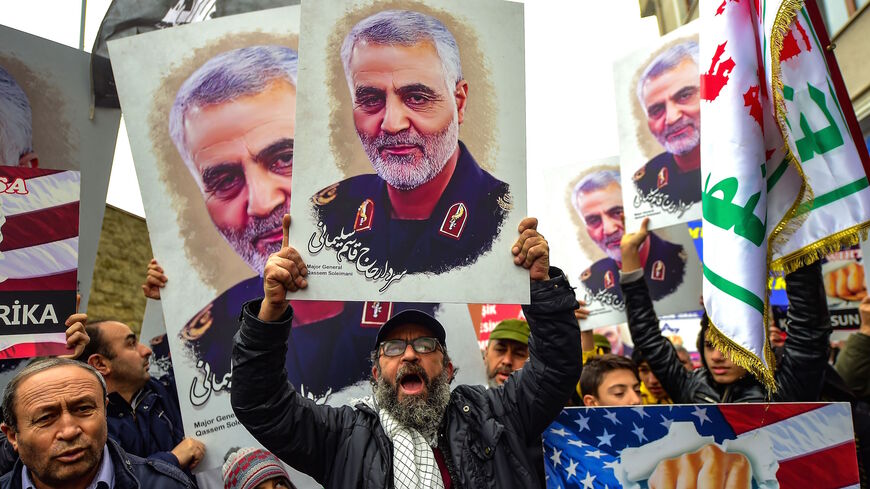 An Arab diplomat who spoke to Al-Monitor on condition of anonymity warned that for every day the talks aimed at reviving the Iran nuclear deal drag on, Tehran’s nuclear program advances.

“Iranians are buying valuable time so that they get to the point of no return,” the diplomat said.

Iran and world powers kicked off the latest round of talks on Jan. 3 in Vienna, yet many sticking points remain, including and especially for those in the region who have to live with Iran.

There are serious concerns in the Middle East that Iran is trying to impose a status quo via the nuclear talks whereby its interests can be preserved.

The Arab diplomat explained that Saudi Arabia and other Arab states accepted the idea of normalizing ties with Iran, “but it’s the Iranian regime that’s exploiting their goodwill to try to maintain its position in Vienna while destabilizing the region” at the same time.

The first week of 2022 saw several attacks on US interests in Iraq, albeit without a drop of blood.

A commander in Iraq’s Popular Mobilization Units (PMU) who spoke to Al-Monitor on condition of anonymity explained that these attacks are “sending a harsh message to the Americans while making sure no drop of blood is spilled. It’s about setting the scene on the second anniversary of the assassination of [Quds Force commander] Gen. Qasem Suleimani and [PMU leader] Abu Mahdi al-Muhandis, and also a show of power the Iraqis want Iran to use at the negotiating table in Vienna to solidify its posture.”

Whether it’s in Iraq or Vienna, it’s clear that the main two parties — the United States and Iran — even though they’re not meeting directly, are staring each other down to gain leverage.

Or at least that’s how the region sees it.

While Iran is insisting that all sanctions be lifted, along with a verification system, the United States and its EU partners are threatening to take Iran’s file back to the UN Security Council and apply a snapback mechanism that will see all UN sanctions reactivated as well as bring to action EU sanctions.

An Iranian source confirmed that this is something that came to their attention, though they don’t regard it as a threat.

According to Ali Vaez, director of the Iran Project at International Crisis Group, the United States can still enforce the measure more rigorously and can deepen Iran's economic troubles and isolate it diplomatically by working with the Europeans to snap back the UN's and EU's sanctions. He explained that this is possible despite the fact the “Trump administration almost exhausted America's sanctions leverage.”

As of May 8, 2018, the date former President Donald Trump announced the US withdrawal from the nuclear deal, the United States has imposed and reimposed hundreds of sanctions against entities and individuals in Iran.

“Trump's unilateral imposition of secondary sanctions showed us that a sanctions campaign does not have to be multilateral to achieve maximum pressure,” said Esfandyar Batmanghelidj, visiting fellow at the European Council on Foreign Relations and CEO of Bourse and Bazar.

Batmanghelidj explained that the economic shock Iran experienced in 2018 was of a similar magnitude to the shock following the imposition of multilateral sanctions in 2012.

“The key question for Iran is whether China would support the snapback of UN sanctions if the nuclear talks were to fail.” Batmanghelidj elaborated on this: “If China does support those measures, winding down purchases of Iranian oil, it would have a significant impact on the Iranian economy. But China will be reluctant to endorse the US-led sanctions architecture and will want to keep importing discounted Iranian oil.”

Market intelligence firm Kpler reported earlier that China imported almost 18 million barrels from Iran in November for an average of about 600,000 per day, though official Chinese data indicate that Beijing hasn’t taken oil from Tehran since December 2020.

The snapback was what Trump’s administration was after back in August 2020 when Washington notified the UN Security Council that it was launching a 30-day process to snap back UN sanctions against Iran. But the UNSC blocked the bid on the basis that most of the 15 members of the council contested the move because the United States had withdrawn from the 2015 nuclear deal.

While the impact of such a move on the Iranian economy is questionable, Iran’s response to such a move might pave the way for another crisis.

“The Iranians would have an opportunity to expel IAEA inspectors, bring cooperation to a minimum and remove the cameras,” says Mohammad Marandi, a professor at Tehran University and an adviser to the Iranian negotiating team, warning that if that happens then it will take many years for Europeans and Americans to discover what's going on in Iran.

Marandi explains that there are many options on the table for Iran: “Iran can expand its nuclear program at multiple levels and in different parts of the country. Iran can also increase pressure on the United States beyond the borders at a time when the United States needs to cut costs desperately.”

But — from Vaez’s point of view — expanding the program is bound to push the United States and/or Israel to resort to military action in the coming months.

Israel has been warning that it’ll not allow Iran to obtain a nuclear bomb, and on several occasions, there have been reports that the United States and Israel were weighing options and are having their plan B prepared in case the talks reach a dead end.

“If the parties fail to find a pathway to restore the nuclear deal, the only way to prevent a perilous military confrontation is through an interim agreement that could put more time on the diplomatic clock,” he said.

Yet a partial deal isn’t on the table, argues Marandi. “There's no discussion of a partial deal; Iran wants the full implementation of the JCPOA but not like in the past. In other words, in the past the Americans refrained from implementing the deal, but this time the Iranians are saying that that's simply not an option.”

On several occasions, Iranian officials clarified that they are not in a hurry to take any deal; rather, they prefer no deal to a deal that’s not going to meet their conditions. However, Batmanghelidj thinks that while Iran is seeking verification and guarantees around sanctions relief because of the lessons learned from the implementation of the Joint Comprehensive Plan of Action (JCPOA) in 2016 and the withdrawal of the United States from the deal in 2018, it also learned that a lot of the expected benefits of the deal didn't materialize while sanctions were in place and that all of the benefits of the deal could be eliminated if the United States unilaterally withdraws.

So, for Iran to strengthen its economic defenses it’ll need a technical approach to sanctions relief that will help ensure more trade and investment can be conducted more quickly and that the benefits of this economic engagement are more durable.

Though Batmanghelidj believes this won't be easy, he still thinks “the experience of sanctions relief in 2016 shows us that many economic benefits will materialize automatically after sanctions are lifted and do not need additional policy interventions by the JCPOA parties.” He concluded, “Iran can expect to sell more oil, conduct more trade and regain access to most of its financial assets, all of which will buoy the economy and buy time for the technical work of ensuring that the more challenging transactions, like the foreign investments in the oil and automotive sector that failed between 2016-2018, can actually be completed this time around.”