US focus of ire as Turkey threatens Syria‘s Kurds 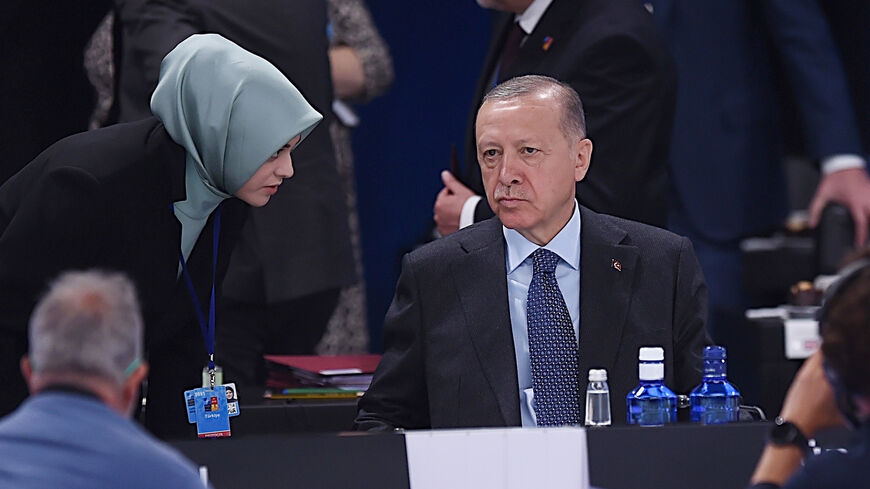 Turkish President Recep Tayyip Erdogan (R) listens to an aide before the start of the Heads of State North Atlantic Council round table meeting during the NATO Summit on June 30, 2022 in Madrid, Spain. - Denis Doyle/Getty Images

Will Turkey mount yet another military incursion against US-backed Kurdish forces in northeastern Syria “at any time, any moment,” as the country’s President Recep Tayyip Erdogan has been threatening for some time? The threat seemed to subside as Erdogan came back “empty handed,” as Al-Monitor contributor Fehim Tastekin put it, from last week’s summit in Tehran with Iran’s Supreme Leader Ali Khamenei and Russia’s President Vladimir Putin. However, Erdogan seems unfazed and Syrian Kurdish leaders are growing increasingly bitter at perceived Western indifference to their plight.

Indeed, the question of when or if a Turkish invasion would take place seemed almost moot when three Kurdish women fighters were killed in a July 22 Turkish drone strike outside the city of Qamishli near the Turkish border. The victims included revered commander Salwa Yusuf, better known by her nom de guerre “Jiyan Afrin,” who served a critical role in the battle against the Islamic State. On July 24, Ankara announced that it had “neutralized” Sahin Tekinagac, who it described as a “local leader” in Kobani who was on its most wanted list, in yet another drone attack carried out by Turkey’s national spy agency, part of an ongoing campaign to decapitate senior and middle-ranking Kurdish military cadres in Syria and neighboring Iraq.

Both Russia and Iran have said they are opposed to further Turkish intervention. Khamenei repeated his objections to Erdogan, saying a Turkish intervention would benefit “terrorists” in a veiled reference to Turkish-backed Sunni opposition rebels and Hayat Tahrir al Sham, the extremist Sunni faction that is running Idlib.

The Kremlin’s blessings are seen as necessary in order for Turkey to strike again. Ankara, by its own admission, has its sights on Tel Rifaat and Manbij, which lie west of the Euphrates River and whose skies are protected by Russia.

The United States agrees that Turkish intervention would benefit another set of terrorists — the Islamic State. Its top ally on the ground, the Syrian Democratic Forces, says they would be forced to redeploy away from areas where the jihadis are regrouping to the Turkish border to defend themselves as they did in October 2019, when Turkey invaded large chunks of northeastern Syria.

Erdogan remained bullish on the flight back from Tehran, telling reporters, “For as long as our national security concerns remain unaddressed an operation will remain on our agenda,” and that Turkey would pursue its goal of establishing a “security belt” along its borders with Syria.

Salih Muslim, the co-chair of the Democratic Unity Party (PYD), which shares power in the Syrian Kurds’ Autonomous Administration, said, “We have no idea what Turkey is going to do,” in a telephone interview with Al-Monitor. But it would need “at least a yellow light” from the Kremlin to proceed, he said.

Muslim and other senior Autonomous Administration officials have renewed calls to the US-led coalition to establish a no-fly zone over northeastern Syria in response to the attacks on their comrades.

Queried about any recent Turkish troop movements that indicated an imminent move, Muslim replied, “They have already completed most of their preparations on the Turkish side, [and from Turkish-occupied areas] around Tel Rifaat and Manbij. There isn’t much left for them to do but to attack.”

Turkish-backed opposition Syrian National Army officials quoted by the Financial Times today said Turkey had deployed more troops and weapons across the border and that it was “serious” about an operation. They gave no further details. However, a senior official from the Kurdistan National Congress, the largest opposition block in northeastern Syria, told Al-Monitor not for attribution that Turkey had told opposition forces to hold their fire for now. “But Erdogan will always wait for the opportunity” to invade again, the official added.

Either way, the threat has propelled the Syrian Kurds to turn to Damascus, raising the Syrian government flag in the threatened areas. Muslim confirmed that several hundred Syrian troops had deployed to Manbij and Tel Rifaat to jointly confront any possible Turkish attack. Iran-backed militias have also reportedly beefed up their presence.

Muslim noted, however, that the deployments were not part of any new deal but rather in line with the October 2019 deal brokered by Russia after Turkey’s Operation Peace Spring.

Russia had then pledged to swap out People's Defense Units (YPG) forces with Syrian and Russian military police in the areas under its protection. One of Turkey’s arguments for mounting a fresh offensive is Russia’s failure to deliver on that score.

Most observers agree that the Syrian army would not prove any match for Turkey’s NATO-trained forces. Russia is opportunistically seizing on the Kurds’ vulnerability to push them into a comprehensive deal with Russia that would see them sever ties with the United States and hand back control, notably of oil resources, to Damascus in a phased capitulation that would probably involve Russia retaining leverage over the Kurds. “Russia is telling us, ‘Go surrender to the regime,’ nothing more,” Muslim groused. But the bulk of his ire was leveled at Washington, which has failed “to lift a finger for us.” “The people are seeing this and they are feeling angry and betrayed after all the sacrifices they made in the battle against the Islamic State,” Muslim said.

The US Central Command posted a message of condolence for the Kurdish women fighters’ deaths, ostensibly to show solidarity, but if anything it angered Kurds and Turks alike.

Muslim said his people were particularly incensed that the message did not name Turkey as the perpetrator of the attack. “It was worded as if these deaths had occurred naturally, as if they were an act of God.”

Salwa Yusuk (AKA Ciyan Afrin) a Deputy Commander of the Syrian Democratic Forces (SDF) - along with 2 fellow female fighters - was killed in an attack near Qamishli, Syria, on July 22, 2022.

The United States has little sway over Turkey’s actions west of the Euphrates. Congress can impose further sanctions, as it did in the wake of Peace Spring, but not much else. The punishment would likely be far tougher if Turkey went after Kobani, another Turkish target US troops withdrew from in 2019. It follows that Russia would be more open to a Turkish attack on Kobani, if only because it would drive a deeper wedge between Turkey and the United States.

Kobani has symbolic significance because it’s where the US-Syrian Kurdish partnership against IS was first forged. Some believe this may be a good reason for Erdogan to target the border town as he seeks to detract the public’s attention from Turkey’s deepest economic crisis in over a decade and also to give Washington the finger.

After fading into the shadows under pressure from the United States, the Kurdistan Workers Party (PKK) is once again making its presence more strongly visible in northeast Syria in parallel with the Turkish escalation. The shift makes it harder for Washington to sustain its arguments that the Autonomous Administration and its armed wings are distinct from the PKK. Local elections slated to be held in October across the Kurdish-led zone are looking shakier in the face of continued Turkish warmongering, as do any foreign investments that the easing of Caesar sanctions the Kurds were hoping would ensue.

Erdogan is making no attempt to disguise his rancor toward President Joe Biden for refusing to heed his calls to ditch the Syrian Kurds. On his trip back from Tehran, Erdogan said he had told Biden during their meeting on the sidelines of the NATO summit in Madrid, “Look, you are sending all these trucks. You are giving support to all the terrorist organization here. Then you say we are joined in the fight against terror; you say we together in NATO.”

In a first, Erdogan added that he agreed with Russia and Iran that the United States ought to leave Syria. “They are saying that America should pull out its forces from the east of the Euphrates. The results that would ensue are also [in line with] Turkey’s expectations,” Erdogan told reporters. “That is because it is America that is sustaining the terror outfits there. And because we are fighting against the terror outfits that America is sustaining, the moment it leaves, or in the event that it stops sustaining them, our job will become easier.”

Noting that he wanted to see Iran and Russia’s support, Erdogan said when it came to the PKK, PYD and YPG-linked “terror issues,” Ankara and Damascus were “like it or not” on the same page. “This is the problem that causes the greatest harm to the regime. The terrorist organization is sucking the oil wells east of the Euphrates river, exploiting them, then selling to the regime,” Erdogan said.

Turkish intelligence officials periodically meet with their regime counterparts. The substance of their conversations remains unknown.

Turkey’s main opposition block says one of its first orders of business when it comes to power will be to fully restore relations with Damascus. Any reconciliation can only come about at the expense of the Kurds and Turkey’s Sunni rebel proxies. The opposition has made it clear that it would dump the latter. As for what demands it would make concerning Syria’s Kurds, it is of import to Kurds on both sides of the border. The opposition can only win the elections with the support of Turkey’s own Kurds, who feel a strong affinity with their Syrian brethren.

History has shown that whoever runs the country, the establishment’s deep-seated paranoia about Kurdish political gains, be they within their borders or without, inevitably trumps all other concerns. That is probably the biggest reason Erdogan ditched the first-ever direct talks peace talks with the PKK and its imprisoned leader Abdullah Ocalan in 2015 to resume the war against the rebels with even greater ferocity. But 38 years of battle has also shown that the war cannot be decisively won by either side, with the human toll rising by the day.