Erdogan fails to enlist Russian and Iranian support for a fresh Turkish military operation in Syria, but he remains bent on maintaining the pressure. 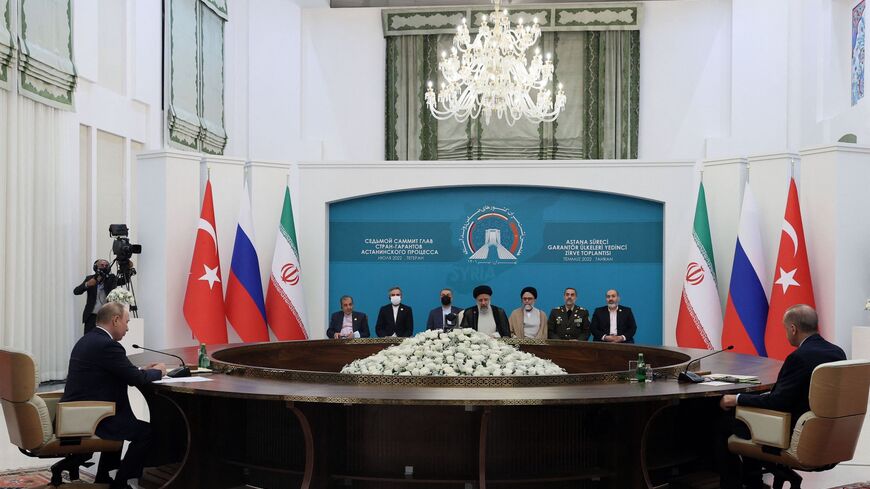 Turkish President Recep Tayyip Erdogan returned without any concrete results from talks with his Russian and Iranian counterparts in Tehran, to which he went with a thick dossier of bilateral problems. The many strains in Turkey’s ties with Russia and Iran remain unrelieved, and Erdogan’s quest for a green light for a new military intervention in Syria remains unanswered.

For Erdogan, the July 19 gathering held as part of the three-way Astana platform on Syria was a long-awaited face-to-face with Russia’s Vladimir Putin and Iran’s Ebrahim Raisi. Erdogan had repeatedly sought to host Putin in Turkey as part of his mediation efforts in the Ukraine war but to no avail. A preliminary deal reached last week on an export corridor for Ukrainian grain via Turkey paved the way for the two leaders’ meeting. And his plan for a bilateral visit to Tehran, mooted since December, had been postponed twice.

Several factors have strained ties between Turkey and Iran in recent times, atop their conflicting positions in Syria. Chief among them is the political impasse in Iraq, where they have backed rival blocs to form the government. Tensions in the Iraqi theater have stemmed also from influence wars in Kirkuk, Mosul and Tal Afar; Iran’s reproof of Turkey’s pursuit of the outlawed Kurdistan Workers Party (PKK) on Iraqi territory; attacks on the Turkish base in Bashiqa by Iranian-backed militia groups; and their support for PKK-linked Yazidi forces in Sinjar. Meanwhile, a covert row has been brewing over potential Iraqi Kurdish gas exports via Turkey.

Furthermore, Iran fears that new transport corridors sought by Azerbaijan and Turkey in the wake of the 2020 Nagorno-Karabakh war could cut off its land link with Armenia and charges that Turkey’s dam building on transboundary rivers has caused water shortages and drought in Iran. Another irritant is Turkey’s construction of a wall on the border, coupled with criticism that Iran is letting Afghan refugees cross into Turkey uncontrolled. Concerns that Ankara’s rapprochement with the Israeli-Arab axis is aimed at Iran and Turkish-Israeli intelligence cooperation over assassination plots against Israelis in Turkey have only added to the tensions.

Besides attending the three-way talks on Syria, Erdogan and Raisi chaired a meeting of the Turkish-Iranian High-Level Cooperation Council in Tehran. What did the trilateral and bilateral talks produce?

Erdogan’s supporters may find solace in how he gave Putin a taste of his own medicine by keeping the Russian leader waiting ahead of their meeting — a purported payback for Erdogan’s awkward moments in Moscow in 2020 — but judging by the joint statement of the summit and the remarks of the leaders, Erdogan failed to get what he wanted or make progress on outstanding problems. In short, the mountain did not even bring forth a mouse.

The eight deals that Turkey and Iran signed in various fields lack any strategic aspect or prospective economic value. A key topic on the agenda was the renewal of Turkey’s gas purchase contract with Iran, which expires in 2025 and will apparently take time to conclude. The two sides reiterated their target to expand bilateral trade to $30 billion from its current $7.5 billion volume. Commercial exchanges have remained well below the potential, not only because of the impact of US secondary sanctions but also Tehran’s deterring attitude vis-a-vis Turkish companies.

Erdogan, who has actively promoted the Turkish-made Bayraktar armed drones on his foreign trips, spoke of defense industry cooperation with Tehran for the first time. “I attach great importance to solidarity in this field,” he said, adding that new endeavors in the defense, oil and gas sectors could help achieve the $30 billion trade target.

What exactly the two sides discussed in terms of defense cooperation remains unknown. US national security adviser Jake Sullivan said last week that Iran was preparing to provide Russia with hundreds of drones. Though Tehran denied the claim, the commander of the country’s ground forces said later that Iran was ready to export weapons to “friendly countries.”

Being a NATO and US ally, Turkey is unlikely to be among the countries that Iran would classify as friends. Moreover, any defense dealings with Iran would require Turkey to take into account the prospect of US sanctions, which it has already experienced for buying air defense systems from Russia.

And while Erdogan’s words on greater partnership with Iran appeared to be little more than wishful thinking, Russia’s ties with Iran are progressing. Hours before Putin landed in Tehran, Iran’s national oil company and Russia’s gas giant Gazprom signed a memorandum of understanding worth some $40 billion — a figure unprecedented for the Iranian energy sector. Under the deal, the Russians will help develop the Kish and North Pars gas fields and also six oil fields in Iran.

Moreover, Iran’s Supreme Leader Ayatollah Ali Khamenei justified Russia’s military campaign in Ukraine and blamed NATO — a remarkable show of solidarity that came off as a response to US President Joe Biden’s summit with Arab leaders where he pledged that the United States “will not walk away and leave a vacuum to be filled by China, Russia or Iran."

Similarly, the talks on Syria offered Erdogan little in which to rejoice. While Erdogan insisted on his plan for a new military operation in northern Syria, targeting Kurdish-held Tel Rifaat and Manbij, he failed to receive the understanding he hoped for from his counterparts. Drawing a clear red line, Khamenei told Erdogan that any military operation in Syria would be detrimental for the region and “play into the hands of terrorists.” Turkey, he stressed, should view Syria’s security as its own security. In his meeting with Putin, Khamenei called also for the removal of US troops from northeast Syria.

Speaking at the trilateral summit, Erdogan said Tel Rifaat and Manbij have become "hotbeds of terrorism" and "it is high time for them to be cleansed.” Putin, for his part, stressed that the Syrian government should take over control in the Kurdish-held northeast.

Syrian Foreign Minister Faisal Mekdad, who traveled to Tehran on the same day, said after talks with his Iranian counterpart, Hossein Amir-Abdollahian, that Erdogan had failed to achieve his goals during the summit. Amir-Abdollahian, for his part, said that “due to the prospect of conflict, the summit sought to change the course of developments and redirect it to a political path.”

Tehran was more explicit than Moscow in opposing a fresh Turkish military move in Syria, which could be attributed to several reasons beyond its hosting of the summit. First, Tehran is irked that major decisions on Syria have been increasingly shaped by the Russian-Turkish dialogue and wants to reassert its role in the Astana trio. And amid Russia’s preoccupation with Ukraine, it has raised its profile in Syria. Also, Iran believes that Russia has been making concessions to Turkey in Syria for the sake of its broader strategic interests and is no longer willing to leave decisions to the give-and-take between Ankara and Moscow. Accordingly, the Iranians have sought closer cooperation with Damascus, demonstrating their resolve to take the initiative by hosting Syrian President Bashar al-Assad in Tehran in May.

Furthermore, Damascus and Moscow share concerns that Tel Rifaat and Manbij changing hands would jeopardize the city of Aleppo — a prospect of extra apprehension for Iran because of the Shiite settlements of Zahra and Nubl that sit on the route between Tel Rifaat and Aleppo.

As for the joint statement of the summit, the wording had a duller edge on Turkey’s sensitivities in Syria compared to that of the Astana meeting in June. The parties reiterated their commitment to fighting terrorism “in all its forms,” highlighting “serious concern” over terrorist groups in Idlib. Referring to the Kurdish-led autonomy drive in the north, the statement said the parties were determined to “stand against separatist agendas” and “rejected all attempts to create new realities on the ground under the pretext of combating terrorism, including illegitimate self-rule initiatives.” Though this paragraph reflects Ankara’s concerns, the ensuing one stresses that security and stability in northern Syria “can only be achieved on the basis of preservation of the sovereignty and territorial integrity of the country.”

The parties rejected unilateral sanctions against Syria and urged international support for basic infrastructure projects to help the return of refugees. The statement’s emphasis on unconditional reconstruction shows that Erdogan has diverged on this issue from Western allies.

Speaking to reporters on the flight back home, Erdogan said the differences between the leaders were obvious, but he vowed to keep the military option on the table until Turkey’s national security concerns were resolved. “We wish to have Russia and Iran by our side in our fight against terrorist organizations. They should give us the necessary support here,” he said. Recalling the joint statement’s call on Washington to withdraw its troops from the northeast, Erdogan said this would “make things easier” for Turkey because “it is America that has nourished the terrorist groups there.”

In sum, Erdogan appears bent on pressing for a military operation despite his failure to get a nod from his partners. What he could ultimately achieve is anyone’s guess.