The Takeaway: Tunisia reaches turning point as its democracy unravels 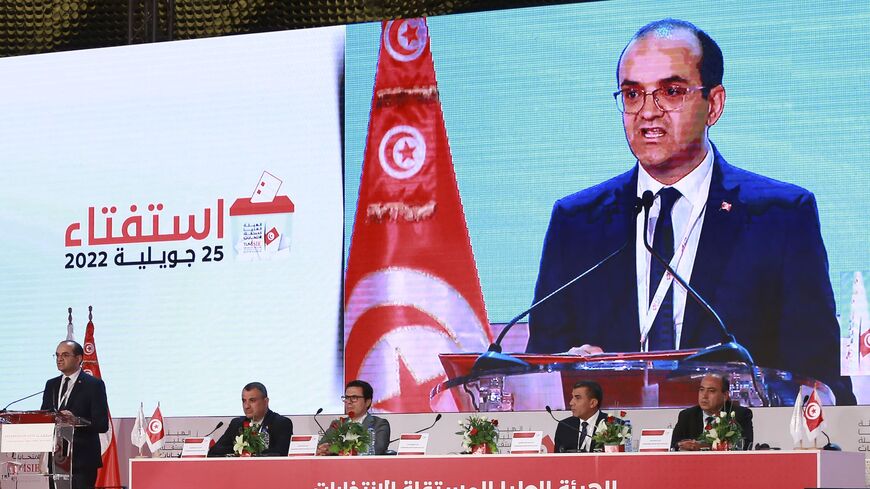 The President of the Independent Higher Authority for Elections, Farouk Bouasker, gives a press conference about the final result of the referendum on a draft constitution in Tunis on July 26, 2022. - ANIS MILI/AFP via Getty Images

“And in particular, we note the widespread concerns among many Tunisians regarding the lack of an inclusive and transparent process and limited scope for genuine public debate during the drafting of the new constitution,” he told Al-Monitor during Tuesday’s press briefing.

So much for the Arab Spring. Tunisia was where Mohamed Bouazizi, a fruit and vegetable vendor, set himself on fire in December 2010 and sparked widespread protests across the region. In January 2011, longtime president Zine El Abidine Ben Ali was ousted from power, and in subsequent years, Tunisia was seen as a model for the region's popular democratic movements.

That chapter is now closed. Tunisia’s controversial referendum this week took place a year to the day after Saied sacked his prime minister and suspended the parliament in a stunning consolidation of his power that critics called a coup. The former constitutional law professor went on to disband the country’s independent judicial watchdog, seize control of its independent electoral commission and sideline the opposition.

“I think going into this [referendum] Saied sensed that both Washington and the Europeans have been reluctant to be too critical of what he's doing. So that's given him an opening to continue,” said former US Ambassador to Tunisia Jacob Walles.

Mixed messaging. On the campaign trail, US President Joe Biden pledged that he would use his presidency to push back against a rising tide of authoritarianism around the world. But when it comes to Tunisia, his administration has often refrained from criticizing Saied directly.

In December, the State Department welcomed his announcement of a “political roadmap” that rights groups said was produced without meaningful input from Tunisian political and civic actors.

“I think they’re sort of looking for a middle ground between criticizing what [Saied’s] done but also not totally cutting off contract with him,” Walles said.

In a letter to Secretary of State Antony Blinken last week, the bipartisan House Democracy Partnership called for a shift in official US government messaging on Tunisia to “openly highlight” the “autocratic tactics and exclusionary actions” undertaken by the Tunisian government.

“The Biden administration, broadly speaking, has conflated disengagement in the region with neutrality," said Monica Marks, a professor of Middle East politics at New York University Abu Dhabi. “Often they've been silent, or even tacitly supportive.” She called the State Department’s statement of concern on Tuesday, however, “a step in the right direction.”

Getting tough on Saied. Both lawmakers and rights groups have pushed the Biden administration to condition Tunisia’s security assistance on measurable reforms. As Jared Szuba reported, the State Department in March proposed cutting the country’s US military and economic aid by nearly half.

Tunisia is suffering from an economic crisis made worse by Russia’s war on Ukraine. Saied has failed to rescue the economy, as promised.

The administration’s budget request is still making its way through Congress. During his confirmation hearing on Wednesday, nominee for US Ambassador to Tunisia Joey Hood said the administration continues to review its assistance programs, and if confirmed, he would “use all tools of US influence to advocate for a return to democratic governance."

From our regional contributors:

Angered over Israel’s support for Ukraine, Russia is threatening to shutter the quasi-governmental Jewish Agency, which encourages Russian Jewish immigration to Israel. Hundreds of thousands of Jews currently live in Russia, and Ben Caspit explains that “as far as Israel is concerned, such a move is a step toward declaring war.” A senior Israeli diplomat said it’s unclear how far Moscow is willing to go. Israel is concerned the dispute could impact Israeli-Russian military coordination in Syria.

In an interview with Amberin Zaman, Syrian Kurdish leader Salih Muslim accused Washington of failing “to lift a finger for us” amid Turkey’s rewnewed threats to invade northeast Syria. “The people are seeing this and they are feeling angry and betrayed after all the sacrifices they made in the battle against the Islamic State,” said Muslim, co-chair of the Democratic Unity Party. Muslim and other Syrian Kurdish leaders are calling for the US-led coalition to establish a no-fly zone over their region following recent attacks, including a Turkish drone strike that killed three Kurdish female fighters outside Qamishli.

Russia has resumed heavy airstrikes on opposition-held areas in Syria’s northwestern province of Idlib. On July 22, Russian warplanes killed seven people in the Jisr al-Shughur countryside, five of them children. The strike coincided with artillery and missile shelling by the Syrian government forces in southern Idlib. Khaled al-Khateb reports that “opposition circles in northwestern Syria fear the escalation may be a prelude to a large-scale military operation by the government forces.”

Syrians displaced from Hajar al-Aswad were shocked to see Chinese film crews shooting a Jackie Chan-produced action movie amid the ruins of their war-ravaged town. The film, “Home Operation,” is inspired by Beijing’s evacuation of its citizens from Yemen’s civil war in 2015. “The shooting has angered many Syrians who perceived this as exploiting the tragedy of a stricken people,” writes Mouneb Taim. As one resident put it, “it’s like they are dancing over our bodies.”

Plus, Elizabeth and Andrew share their final impressions of Biden’s trip in the “On The Middle East” podcast.