Far from the front, Tunisia suffers because of Ukraine war

Grain shipment deal mediated by UN and Erdogan offers a ‘beacon of hope’ in a food crisis worsened by distant conflict. 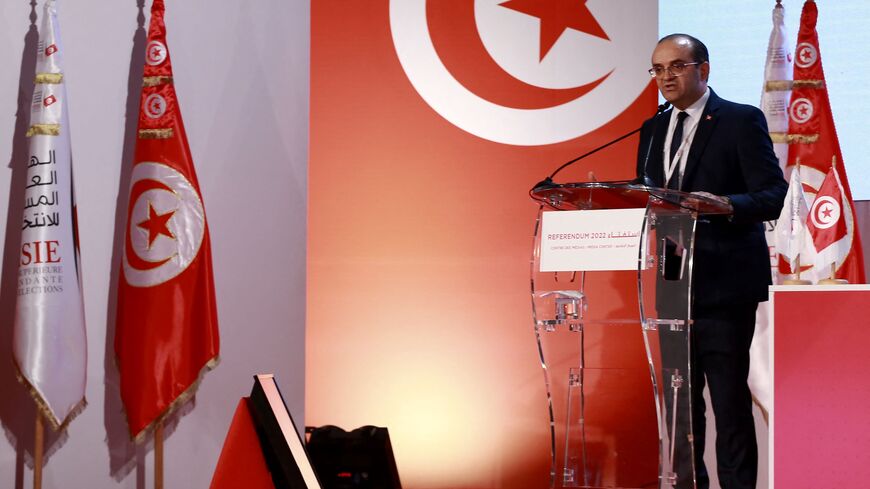 The president of Tunisia's Independent Higher Authority for Elections, Farouk Bouasker, gives a press conference about the final result of the referendum on a draft constitution in Tunis on July 26, 2022. - ANIS MILI/AFP via Getty Images

This was a bad week for Tunisian democracy, and it’s likely to get worse.

Tunisia, along with other fragile economies around the world, has been slammed by a global food crisis and energy turmoil unleashed by Russia’s invasion of Ukraine.

In the Middle East, the war has produced winners among oil-producing states who benefit from higher energy prices and losers among countries dependent on oil and grain once supplied by the two warring nations. That has fostered a trend toward political and economic instability in vulnerable countries.

A "beacon of hope" in an otherwise gloomy forecast, according to UN Secretary-General Antonio Guterres, is an agreement between Russia and Ukraine to export grain via the Black Sea — facilitated by Turkish President Recep Tayyip Erdogan.

No country has felt the ripple effects of the war more clearly than Tunisia, where political divisions already run deep. A majority of Tunisians and the country’s leading opposition parties sat out President Kais Saied’s July referendum to expand his presidential powers under the constitution, as Hanen Jebli reports from Tunis.

A former university professor, Saied, elected president in 2019, faced widespread discontent and violent demonstrations in July 2021 over a deteriorating economy, in good part because of the COVID-19 pandemic, and poor basic services.

The Ukraine war was another blow. "The Tunisian economy is suffering from the economic impact of the Ukraine war that came as a major external shock on top of the Covid-19 pandemic," the IMF reported this month.

Tunisia imports approximately 54% of its wheat from Russia and Ukraine.

“These pressures add to the economy’s underlying structural weaknesses,” the IMF said. “The near-term outlook is challenging, as growth [previously estimated at 2.2% for 2022] will likely decelerate while higher international prices for energy and food are adding to already high inflation [previously estimated at 7.7% for the year] and are increasing fiscal and external deficits and debt.”

Tunisia is also facing a water crisis. "Remote areas in Tunisia — especially where agriculture and livestock breeding abound — already suffer from water scarcity, thus exacerbating the crisis in a country suffering from economic collapse and a worsening political crisis," Sgaheir Hidri reports from Tunis. "This comes at the same time that Tunisia — like much of the world — is facing challenges importing wheat due the Russian invasion of Ukraine. Tunisia is already heavily dependent on imports — about 80% of its soft wheat is imported, with nearly half of that coming from Ukraine."

"The conflict in Ukraine is compounding what is already a year of catastrophic hunger, unleashing a wave of collateral hunger that is spreading across the globe, transforming a series of terrible hunger crises into a global food crisis the world cannot afford," noted a report by the World Food Programme and the FAO last month.

In the Middle East, conflict and climate shocks had placed Yemen, Syria, Sudan, and Lebanon as high-risk hunger "hot spots," even prior to the war in Ukraine. Egypt, Tunisia and Jordan have also been hit hard by the economic consequences of the conflict.

An update to the IMF’s World Economic Outlook this month noted that “the link between prices and social stability means that further barriers to trade, or a poor harvest due to extreme heat and fertilizer shortages, risk causing further hardship, famine, or unrest. These risks could be allayed by easing logistic hurdles brought about by the invasion of Ukraine, including the Black Sea blockade.”

The best news for Tunisia last week was the Black Sea Grain Initiative between Russia and Ukraine, mediated by Turkey and the UN.

UN Secretary General Guterres called the deal an “unprecedented agreement”  to resume Ukrainian grain exports via the Black Sea and “a beacon of hope” for countries impacted by the war.

The agreement is a diplomatic coup for Erdogan on the global stage, suggesting he may be one of the few world leaders able to offer a diplomatic bridge between Russian President Vladimir Putin and Ukrainian President Volodymyr Zelenskyy.

“Erdogan’s supporters are casting him as the leader who saved the world from starvation, and he will try and use this to his political advantage at home, where doubts about the competence of his administration are increasing," writes Semih Idiz. "His advisors hope this will shore up his weakening domestic support before next year’s presidential elections. Public support for Erdogan has been declining because of Turkey’s economic meltdown mainly due to his unorthodox policies.”

A closed chapter on the Arab Spring

For Tunisia, the recent troubles are a distant cry from the country’s critical role a decade ago in the region-wide popular demonstrations known as the Arab Spring. In January 2011, demonstrators forced long-time president Zine El Abidine Ben Ali from power. Tunisia was, for a time, seen as a model for the region's popular democratic movements, keeping to a steady if sometimes rocky democratic path.

That chapter, in both Tunisia and the region, is now closed with Saied’s referendum.

"Tunisia has experienced an alarming erosion of democratic norms over the past year and reversed many of the Tunisian people’s hard-won gains since 2011," US Secretary of State Antony Blinken said in a statement this week about the July 25 referendum, adding that "since July 25, 2021, the suspension of constitutional governance, consolidation of executive power, and weakening of independent institutions have raised deep questions about Tunisia’s democratic path, both in Tunisia and internationally."

State Department Spokesman Ned Price, responding to a question from Al-Monitor’s Elizabeth Hagedorn, said that "we note the widespread concerns among many Tunisians regarding the lack of an inclusive and transparent process and limited scope for genuine public debate during the drafting of the new constitution.”

During his confirmation hearing on Wednesday, nominee for US Ambassador to Tunisia Joey Hood said that if confirmed he would “use all tools of US influence to advocate for a return to democratic governance," Hagedorn reported.