There are international and local concerns over the political and economic situation in Tunisia, which is hoping for a deal with the IMF in return for implementing reforms that are rejected by the powerful UGTT labor union. 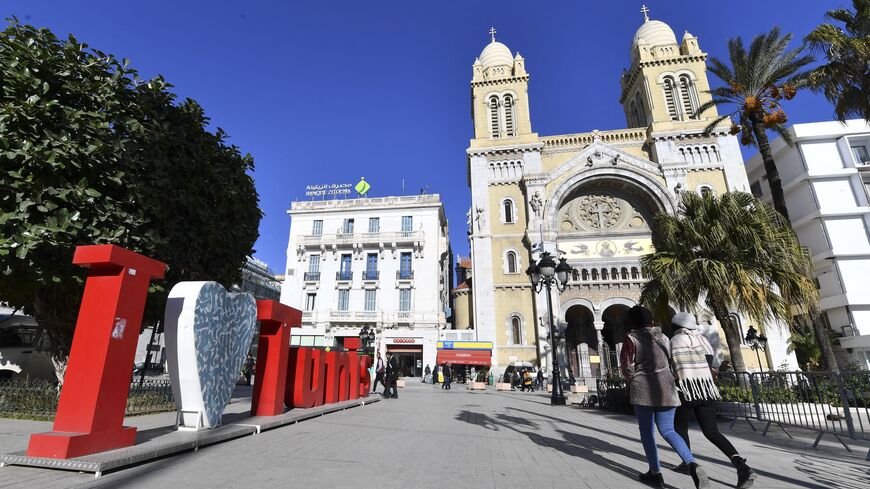 People walk past Saint-Vincent de Paul Cathedral on Habib Bourguiba Avenue in Tunis on Dec. 14, 2021, one day after Tunisia's president extended his monthslong suspension of parliament until new elections in December 2022, while calling for a July referendum on constitutional reforms. That marks a year since President Kais Saied sacked the government, suspended parliament and seized a string of powers, as the North African country wallowed in political and economic crises compounded by the coronavirus pandemic. - FETHI BELAID/AFP via Getty Images

TUNIS, Tunisia — Tunisia’s efforts to obtain a loan from the International Monetary Fund (IMF) to deal with its deteriorating economic crisis may be hindered by the growing international criticism against President Kais Saied’s recent measures, which are seen as a way to cement his one-man rule.

In remarks to the House Appropriations Committee on April 28, US Secretary of State Antony Blinken said that Tunisia needs to address concerns about its democracy if it wants to garner much-needed international economic support.

He stressed that Tunisia must first proceed with the parliamentary elections promised to be held at the end of the year.

Tunisia is seeking a loan package from the IMF as it grapples with an economic crisis exacerbated by the COVID-19 pandemic, which reduced the GDP growth by more than 8% in 2020.

The United States is the largest financial contributor to the IMF.

President Joe Biden’s administration has escalated its pressure against Saied after the latter seemingly ignored calls to address the political crisis in Tunisia, birthplace of the Arab Spring.

Meanwhile, the IMF put as conditions for any loan reducing subsidies and reducing public employees’ wages, measures the Tunisian General Labor Union (UGTT) categorically rejected considering that they would affect the purchasing power of citizens.

Ahead of Labor Day on May 1, the UGTT published a statement on its Facebook page on April 28 that it “shall not sit idly by nor accept the vanishing of the last opportunity for change.”

It further warned that the country “is on the verge of an economic disaster.”

In the same statement, the UGTT, Tunisia’s largest trade union, said the country “is on the edge of an economic disaster that the successive governments failed to resolve, besides increasing debt and burdening the general public with taxes, high prices, wage freeze, deepening unemployment and raising subsidies in order to bridge the state budget deficit.”

Ali Laarayedh, vice president of the moderate Islamist Ennahda party and former prime minister (2013-14), told Al-Monitor, “There are real difficulties at the level of the state’s resources for the 2022 budget, as well as difficulties in achieving the necessary reforms to revive the Tunisian economy due to President Saied’s political choices to suspend parliament and dissolve constitutional bodies, including the Independent High Authority for Elections and the Supreme Judicial Council. These measures have completely isolated the country [internationally] and led sovereign rating agencies to degrade the country’s reputation in its reports.”

On March 18, Fitch Ratings downgraded Tunisia’s sovereign rating to CCC in a sign that the country's defaulting on its debt for the first time was “probable,” according to the agency.

Laarayedh continued, “International donors have become distrustful of the country’s policy to confront the crisis, which has also negatively affected bilateral relations between Tunisia and the countries it deals with, such as the United States, which also has reservations about the current political situation.”

Laarayedh added, “If Tunisia does not carry out the necessary reforms and falls short of restoring democracy and all the constitutional institutions and bodies that Saied dissolved, it will be difficult for it to address the economic crisis.”

Saied announced on July 25, 2021, the suspension of parliament and the dismissal of the prime minister, before moving to completely dissolve parliament in March. He also launched national talks in January to pave the way for a popular referendum on constitutional changes scheduled for July, ahead of parliamentary elections by the end of the year.

In February, Saied issued a presidential decree dissolving the Supreme Judicial Council, the country’s top independent judicial watchdog, which he replaced with a temporary body whose members he appointed himself.

In April, he granted himself powers to appoint the head of the Independent High Authority for Elections — measures that his critics described as “authoritarian.”

In a related context, economic analyst Sadok Jabnoun told Al-Monitor that the war between Russia and Ukraine also had negative repercussions on most countries of the world, and Tunisia was not immune to this global economic crisis that has led to a rise in the prices of many goods.

Tunisia, which imports most of its wheat needs from both Ukraine and Russia, recently witnessed an increase in the prices of commodities and gasoline amid a significant shortage of bread, which is a staple food for Tunisians, while the tourism sector has also been badly affected.

Jabnoun said the UGTT must take into account the current economic reality and the demands of the IMF, which presents a solid plan to get Tunisia out of its crisis.

He noted that the UGTT must be keen to implement this plan by the IMF in the interest of the country.

In January, a report published by the International Crisis Group warned that Tunisia is barely able to pay the salaries of public employees or its foreign debts.

Tunisian political analyst Salah Ad-din al-Jourshi told Al-Monitor that the rise in the trade deficit during the first quarter of this year will negatively affect the country’s balance of hard currency, adding that this may lead to a further decline in the exchange rate of the dinar.

The Tunisian Central Bank revealed on April 9 that the Tunisian dinar sunk to its lowest level against the US dollar in three years, as the price of one dollar reached 3,0985 dinars (as of the time of this writing). The Tunisian national currency is affected by stagnation due to social unrest and political instability that Tunisia has witnessed since the 2011 Jasmine Revolution.

For his part, Jourshi said that amid a political climate that lacks consensus, the failed political choices have contributed to the devaluation of the Tunisian dinar compared to other foreign currencies.