Syrians who were displaced from Hajar al-Aswad area of Damascus in the past years were shocked to see Chinese film crews standing on the rubble of their homes to shoot a new film by Jackie Chan. 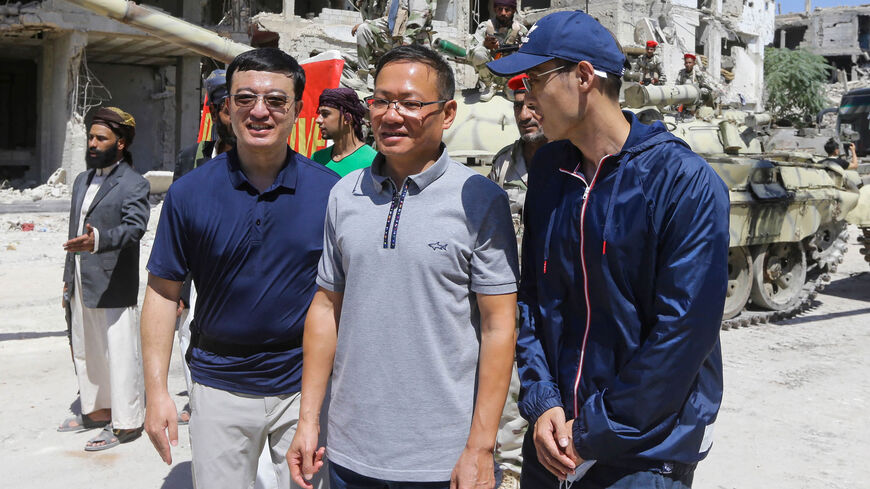 In a ghost town that has been deserted since 2018, and amid the rubble of destroyed buildings after many years of Syrian and Russian bombardment, Jackie Chan chose Hajar al-Aswad (Black Stone) area in Damascus as a location to shoot his new film, “Home Operation.”

The shooting has angered many Syrians who perceived this as exploiting the tragedy of a stricken people.

According to Digital Studio Me website, the film is produced by Chan, along with the Emirati Art Makers Production Studio.

The director of the film, Song Yinxi, told Digital Studio Me back in October 2021 that Home Operation revolves around the early stage of the Yemeni civil war in 2015 and tells the story of how China evacuated over 600 nationals, as well as more than 200 nationals of other countries during this period. The film also focuses on the process of overseas evacuation, according to Song.

In mid-July, the semi-empty Hajar al-Aswad area buzzed with the Chinese crew and Syrian supporting actors, some of whom wore Yemeni traditional outfits. The first day of filming was attended by the Chinese ambassador in Damascus, who has maintained a strong relationship with the internationally isolated Syrian government.

A former resident of al-Thawra neighborhood in Hajar al-Aswad who fled in 2018 to northwest Syria told Al-Monitor, “I live here with my children in a tent, under the scorching sun. My biggest concern is providing food for my family. Meanwhile, my old home and my neighborhood’s streets have turned into a film set. It's sad.”

He said, “It’s like they are dancing over our bodies. We are victims of the Syrian regime and the Chinese crew is dancing over the bodies of the people whose homes were destroyed and now turned into a theater.”

The source noted, “I wish the Chinese crew and the production company would restore my home. I plan on going back because I certainly do not want to stay in a refugee camp. I really hope the purpose of filming in my neighborhood is not to simply use the rubble of my home.”

He added, “What they see as a film set, I spent my entire life working for. I had built my house, got married and made it a home. We barely got to live there and it was destroyed by air raids in 2018. I never got over that day. All I cared about was keeping my kids safe. Then one of my old neighbors sent me a picture of my destroyed home, jokingly telling me that it will become famous since it will be featured in a Jackie Chan film.”

He said, “It was no joke for me. It reopened an old wound. Not only did I lose everything I had worked for, but it ended up being turned into a film set. Unbelievable.”

Although Chan is producing the film, he will not go to Syria to participate in the filming, which highlights the role of the Chinese authorities in the massive evacuation from Yemen at the onset of the war.

On July 14, Song told reporters in Hajar al-Aswad, “The film focuses on the point of view of the diplomats from the Communist Party who braved the barrage of bullets in a war-torn country and were able to transport all Chinese citizens safely on board a warship.”

According to IMDb, “The story [is] inspired by real events of the emergency evacuation of Chinese nationals and diplomats, but also foreigners, during the war in Yemen in 2015.”

Abu Mohammed, another former resident of Hajar al-Aswad who currently lives in Damascus, near his old neighborhood, told Al-Monitor, “After years of leaving my home, I paid off some regime officers last year to allow me to enter for a few hours to see whether my home was completely destroyed, or if I still had something there. I had not been able to visit my place since 2015 amid the ongoing clashes between the regime forces and the Islamic State [IS].”

He said, “There was no sign of my home. The entire street had turned into rubble. I was completely shocked. I was planning on having my eldest son’s wedding there, but unfortunately that will never happen.”

He noted, “Instead of rebuilding our homes, or allowing us to go back to do it ourselves, the government decided to rent our neighborhood as a film set. Meanwhile, we need to get dozens of documents to prove that we used to live there, and then we would get turned away by army checkpoints or asked to pay sums of money to enter. It has become impossible for us to reach our homes, but the Chinese crew could easily shoot their film on the rubble of our homes.”

Abu Mohammed added, “Had there been a just government, I would have filed a lawsuit against those responsible for filming there and using the tragedy of people whose homes were destroyed. This is unacceptable. After seeing the video the director posted, I was extremely angry. I could not believe how they would dare use homes where memories were created and dreams were destroyed simply to shoot some scenes. No one asked for our approval. They were granted access while we, the owners, are barely allowed inside.”

The Turkish Hurriyet Daily News site reported that the devastated Hajar al-Aswad area was chosen for the filming instead of a Yemeni city because it is considered safe and under the control of the Syrian government, while Yemen was deemed too dangerous a venue to film.

He added, “Building studios similar to these areas is very expensive, so these areas are considered as low-cost studios.”

Hajar al-Aswad was a densely populated suburb of Damascus located next to the Yarmouk camp for Palestinian refugees. The two areas became major hot spots in the Syrian conflict that erupted in 2011, causing the displacement of many residents, especially after IS took control of parts of them in 2015, making them points of contact where the ongoing war completely destroyed homes and entire neighborhoods.

Although few residents have returned to the less affected parts of Hajar al-Aswad, most of it remains uninhabited to this day.