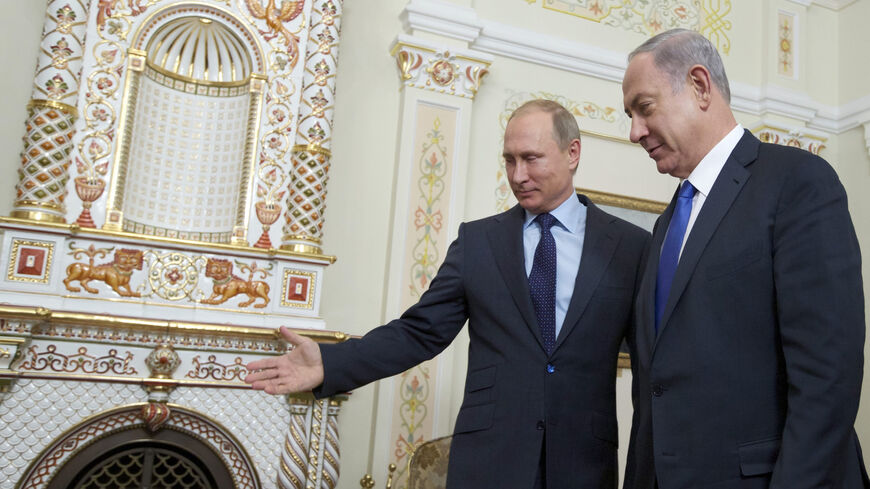 Opposition leader Benjamin Netanyahu called a press conference July 26 to deliver what he described as a special statement. As soon as the participating journalists assembled, they realized that Netanyahu really called the event to launch a new attack on Prime Minister Yair Lapid and Defense Minister Benny Gantz. He chose to accuse them of acting irresponsibly in a serious crisis involving Israel’s relationship with Russia.

"We are in the midst of a dangerous crisis in relations between Russia and Israel. It is possible and necessary to get out of this crisis. For years, we have led a balanced and responsible relationship with Russia. In the last few days, I have become worried that what we have built for years is crumbling right before our eyes over the last few weeks. This happens because of a combination of amateurism, irresponsibility and arrogance," warned Netanyahu.

He continued, "I have one request of Lapid and Gantz — stop blabbing. Your conduct endangers our national security. If the crisis is not stopped immediately, it may lead to serious damage to our security."

Lapid and Gantz were quick to respond. Lapid’s office attacked Netanyahu for refusing to attend security briefings with him, and claimed that this was why Netanyahu was not up to date with the latest developments on the Russia front. "The issue is being handled by the Israeli government. As [Russian President Vladimir] Putin's personal spokesman said today, there is no crisis between the countries. If Netanyahu had bothered to come to Prime Minister Lapid for a security policy update, Netanyahu would have learned the facts," said Lapid’s office.

Gantz took it a step further, saying, “The last person who should talk about unnecessary squabbling on security issues is Netanyahu."

Clearly, this sharp exchange has another reason beyond the diplomatic crisis, namely the ongoing election campaign ahead of the Nov. 1 general elections. Both sides seem to exploit the crisis to bicker over which of them is best suited to handle Israel’s foreign policy.

Netanyahu succeeded in identifying Lapid’s Achilles’ heel. Lapid is a first-time prime minister caught in the middle of a high-profile diplomatic crisis. Netanyahu took advantage of this to paint Lapid as an inexperienced dilettante, who is pursuing a risky foreign policy.

Indeed, when it comes to foreign policy, Netanyahu has an advantage over every other politician in Israel. He has boasted for years about his excellent relationship with two world leaders: former US President Donald Trump and Putin. He had even included their photos in past campaign posters with the heading, “Netanyahu is a whole different league!”

Now that the recent diplomatic incident has become a hot topic in Israel’s internal politics, Lapid and Gantz have no choice but to respond to Netanyahu. They are well in the midst of an election campaign, and the crisis with Russia does nothing to help their reputations. This is especially true of Lapid, who is thought to lack experience in the intricacies of diplomatic and security affairs.

All of this began July 21, when the first signs of the crisis popped up during Channel 12’s main news show. The channel was quoting Russian Ambassador to Israel Anatoly Viktorov, who had allegedly said in a private conversation, "Yair Lapid as prime minister could create problems for Israeli-Russian relations."

The report suggested that the ambassador was referring to Lapid’s statements on Ukraine, and specifically to the fact that he was the first public figure in Israel to call the war in Ukraine a war crime and to accuse Russia of intentionally targeting the civilian population. While then-Prime Minister Naftali Bennett was pursuing a balanced approach and even served as a mediator in the conflict, Foreign Minister Lapid took a more aggressive tone.

In parallel to the alleged statement by the ambassador, there were other worrying signs. Moscow started signaling that it was planning to close the Jewish Agency’s office (the body assisting Jews who wish to immigrate to Israel) in Russia because of alleged legal problems.

Reports on Moscow’s intention to close Jewish Agency activities in the country persisted. Thus, on July 24, Lapid warned Russia that such steps would be a “grave event” that would negatively affect bilateral diplomatic ties. Other reports suggested that the Foreign Ministry was preparing a list of possible diplomatic reactions and sanctions.

This strong reaction by Lapid was in fact the main reason for Netanyahu’s criticism. Sources within the Likud party described Lapid as a charlatan, who knows absolutely nothing about foreign policy. The damage to Lapid’s image seemed to be considerable.

Why did Lapid adopt such a sharp tone? Some analysts claim that he wanted to take advantage of the crisis to build up his image as a leader, who does not bend to Putin. He is, as we have noted, caught in the middle of a very tense election campaign, and while he may head the second-largest party in the Knesset, he will have a hard time putting together a new government. Furthermore, Gantz has already begun proposing himself as an alternative to Lapid as head of a center-left government.

Other analysts claim that Lapid is simply expressing his sincerely held beliefs. He is committed to the idea that Israel’s place in the international arena lies with the liberal West. That is why he stated Feb. 28 that “Israel was and will be on the right side of history,” or in other words, on the side of Ukraine. It is no coincidence that his first visit overseas as prime minister was to Paris, where he was the guest of his good friend Emmanuel Macron.

Regardless of the actual reason for his response to the war, it must still be asked whether Lapid acted wisely when he chose a path that would inevitably lead to conflict with Putin. It is quite possible that this conflict helped him somewhat with the center-left base that is opposed to the war and considers Putin to be a violent dictator. On the other hand, his approach got him tangled up in a series of incidents that will harm him politically and hurt his image.

Relations between Israel and Russia are also important in terms of security. For one thing, Russia does not stand in the way of alleged Israeli aerial attacks on Syria. There are already major concerns about what might happen if security coordination between Israel and Russia falls victim to the tensions between the two countries. Israelis have always been very sensitive to anything that threatens their security.

This is why Lapid has been spending the last few days trying to reduce tensions between the two countries. For one thing, he stopped using menacing language when discussing the Kremlin. Furthermore, Lapid’s office released a statement praising the good relationship between Israel and Russia and expressing the hope that any differences the two countries have will be resolved through dialogue.

In an effort to alleviate damages to his image, Lapid’s office also released correspondence he exchanged with Putin upon entering the prime minister’s office.

Netanyahu has no plans to let up. Now that he has the opportunity to present himself as a superstatesman of sorts, he will not give up on that so easily. As a result, Putin is likely to continue playing a lead role in Israel’s election campaign, at least in the short term.