Mixed feelings in Israel over Bennett’s mediation efforts on Ukraine

The Israeli opposition is criticizing Prime Minister Naftali Bennett as overeager to drag Israel into the Russia-Ukraine quagmire. 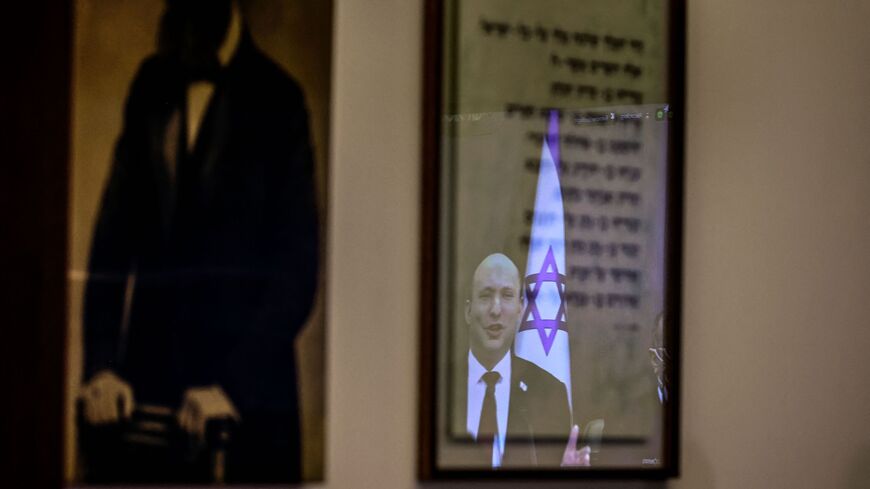 Israeli Prime Minister Naftali Bennett's image is reflected in a frame on the wall next to a picture of Theodor Herzl as he attends a cabinet meeting at his office in Jerusalem, on March 6, 2022. - RONEN ZVULUN/AFP via Getty Images

Former US Secretary of State Henry Kissinger used to say, “Israel has no foreign policy, it has only a domestic policy.” This observation has been often invoked by pundits commenting on Prime Minister Naftali Bennett’s intense efforts to serve as a mediator between Russia and Ukraine.

He was lauded for his secret trip to the Kremlin March 5, and since then, for his frequent phone calls with the presidents of both Russia and Ukraine. But why does Israel feel the need to insert itself into this diplomatic quagmire, and why was Bennett so eager to get into the game? Was it national interest that motivated him, or was it personal?

Bennett is an unpopular prime minister who came to power in a unique set of circumstances. He heads a small party, and even now, 10 months after he entered office, he has yet to win over the public and has yet to be described as a statesman.

Bennett now claims he wants to prevent a global catastrophe by exploiting Israel’s advantageous position as one of very few countries that have close relations with both Russia and Ukraine. He describes his actions as the fulfillment of Israel’s moral obligation to prevent bloodshed: “Even if the chances are slim, as soon as there is the smallest opening … as long as the candle is still lit, we must make effort and perhaps even act,” he told the cabinet upon returning from the Kremlin.

Israel does enjoy a special status in this conflict and has a moral obligation to care for the sizable Jewish communities in both countries. But whether they merit Israel positioning itself as a global mediator in a conflict that threatens the world order is questionable.

No one doubts that Bennett has managed to make himself a well-known figure in the international arena in a very short time. The people surrounding him take great pride that the international press is intrigued by him and that he has proved that former Prime Minister Benjamin Netanyahu isn’t the only Israeli leader who can play in the big leagues.

Bennett has managed to harness the war in Europe to build up his own image, and his efforts have already started to bear results. A poll released yesterday by Channel 12 gave him two more seats, a small win. But with his party bleeding voters since Bennett took office, even seven seats are reason for optimism.

However, three weeks into the war, with Ukraine’s cities now a battlefield and millions of refugees running for their lives, it is unclear what exactly the Israeli prime minister has contributed to restoring peace in Europe. Furthermore, injecting himself into the conflict could end up being a serious mistake that ultimately harms Israeli interests.

The conflict is tangled, with no end in sight. While it is in Israel’s interest to maintain a reasonable relationship with President Putin, if only to ensure that the IDF can continue to operate freely in Syria, the West considers Russian President Vladimir Putin the villain in this story, while Ukraine is regarded as the heroic victim.

On Tuesday, Knesset speaker Mickey Levy announced that Ukrainian President Volodymyr Zelenskyy would address the Knesset via Zoom March 20. Soon after his announcement it was revealed that Russia’s ambassador to Israel, Anatoly Viktorov, had asked for an urgent meeting with Levy. Israel should worry that Putin might ask to address the Knesset too. If such a request is submitted and the Knesset refuses, it would certainly hurt the relationship that Bennett has managed to build with Putin.

One senior member of the coalition told Al-Monitor on condition of anonymity, “If Bennett had kept a low profile, Zelenskyy might never have asked to address the Knesset. On the surface, it seems like a minor matter, but it involves complex diplomatic issues revolving around our relationship with Russia.”

Over the last few days, it has also come out that Bennett decided to fly to Moscow and meet Putin without consulting with the staff of the Foreign Ministry or the Ministry of Defense, not even Foreign Minister Yair Lapid or Defense Minister Benny Gantz. He simply informed them that he was going shortly before his plane took off.

He was apparently worried about potential leaks or that one of them would oppose the trip and block it. Bennett also reportedly informed the White House about his trip in advance but he did not consult with the Americans about it. He certainly didn’t ask their permission. His actions show a marked lack of caution, given how is at stake.

“It requires exceptional international prestige to serve as a serious mediator,” former Foreign Minister Yisrael Katz told Channel 12 News in an interview. “Why is Israel butting in deeper and deeper? The Americans don’t need Bennett to mediate. This is an event that the president of the United States himself is managing personally.”

Other members of the opposition also attacked Bennett for his efforts. True, they are his political rivals and it is in their interest to attack, mock and belittle him. Still, the question remains: Why did Bennett run off to Moscow with all the challenges currently facing Israel, including the nuclear talks with Iran and the absorption of masses of new immigrants and refugees.

There was a fierce debate in the government just yesterday, when the Minister of Immigration Pnina Tamano-Shata accused her own government of racism. She said that while the coalition is rushing to bring in new immigrants from Russia and Ukraine, the families of Israeli citizens in Ethiopia are still waiting to immigrate, even though they are also Jewish and living in a war zone.