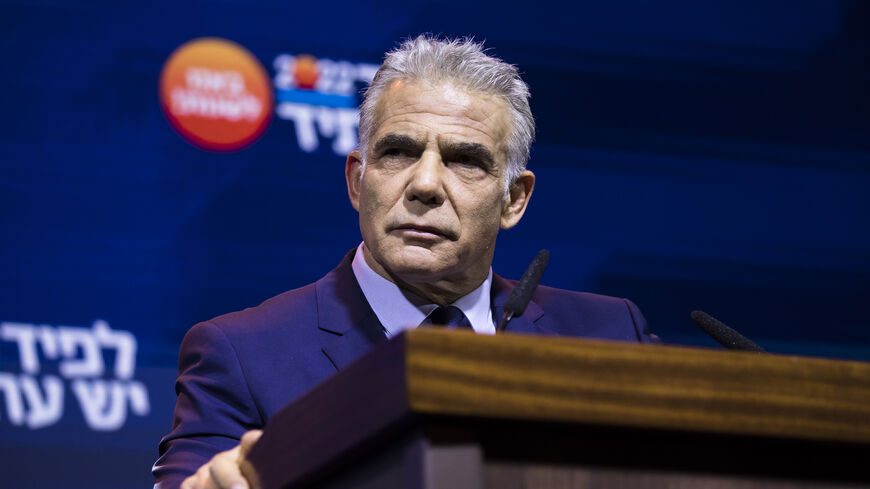 The Russian Embassy in Egypt slammed Prime Minister Yair Lapid over Israel’s military operation in the Gaza Strip on Aug. 9. The embassy accused Lapid of hypocrisy for firing at Gaza while condemning Russia's military actions in Ukraine.

In a statement posted on its social media accounts, the embassy showed a screenshot of a tweet Lapid posted April 3 on the killing of civilians in the Ukrainian town of Bucha, attributed to Russian forces. Lapid wrote at the time, “It is impossible to remain indifferent in the face of the horrific images from the city of Bucha near Kiev, from after the Russian army left. Intentionally harming a civilian population is a war crime and I strongly condemn it."

Chastising Lapid, the embassy argued, "Compare Yair Lapid's lies about [Ukraine] in April and attempts to place blame and responsibility on [Russia] for the deaths of people in Bucha brutally murdered by the Nazis with his calls in August for bombing and strikes on [Palestinian] land in the Gaza Strip. Isn't that double standards, complete disregard and contempt for the lives of Palestinians?"

The Russian Embassy in Israel did not share the post. Still, this was not Russia’s only reaction to Operation Breaking Dawn. Already on Aug. 6, Russian Foreign Ministry spokesperson Maria Zakharova said in a written statement, “We are observing with profound worry how events are evolving,” calling “on all the parties involved to show maximum restraint.” She continued, “The new escalation was caused by Israeli army firing into the Gaza Strip on Aug. 5, to which Palestinian groups responded by carrying out massive and indiscriminate bombardments on Israeli territory.”

Jerusalem was hardly surprised by the double Russian reaction. Still, some disappointment was noticed as the embassy post was published almost in parallel to a telephone call that took place between Israeli President Isaac Herzog and Russian President Vladimir Putin.

Herzog’s office explained that the phone call was put in place as part of Israel’s campaign to prevent Moscow from closing down the operations of the Jewish Agency in Russia. A statement issued by Herzog’s office said, “The presidents discussed Israeli-Russian bilateral relations, including the challenges of the Jewish people in the Diaspora. In this context, President Herzog elaborated on the issue of the activities of the Jewish Agency in Russia.” The statement did not say if the two leaders discussed Israel’s Operation Breaking Dawn in Gaza.

On July 5, the Russian Justice Ministry ordered the agency to cease all operations inside the country. Since then, a first court hearing took place on the matter. A second hearing is scheduled for Aug. 19. The ban on the Jewish Agency generated headlines in Israel and within the American Jewish community. On July 26, Moscow criticized Israel for allegedly siding with Ukraine against Russia, but also said that the dispute over the Jewish Agency was a legal matter that should not spill over into bilateral ties. A senior Israeli delegation traveled to Moscow a few days later, to discuss the issue with the Russian authorities. Reportedly, no solution has been reached.

With the issue of the Jewish Agency, Israel’s ties with Russia turned into an internal-political game. Former Prime Minister Benjamin Netanyahu cultivated a personal relationship with Putin, and had traveled several times to Russia when he was in office. Last month, he accused Lapid on sabotaging the bilateral ties, thus allegedly endangering Israel’s security.

Speaking at a July 26 press conference, Netanyahu said for years "we have led a measured, balanced and responsible relationship” with Russia, but that there was currently “a dangerous crisis.” Lapid and Defense Minister Benny Gantz were “babbling,” he argued, and “endangering our national security.”

Responding to Netanyahu, a spokesperson for Lapid said at the time that “there is no crisis.” Still, with Vienna talks at a watershed moment, Israel is currently concerned over tightening ties between Moscow and Tehran. Reports Aug. 9 on Russia launching an Iranian satellite into orbit from southern Kazakhstan will only increase Jerusalem’s apprehensions.