Thousands of Palestinian families are facing the threat of food insecurity, as a result of the significant rise in the prices of basic commodities, while officials fail to address the issue. 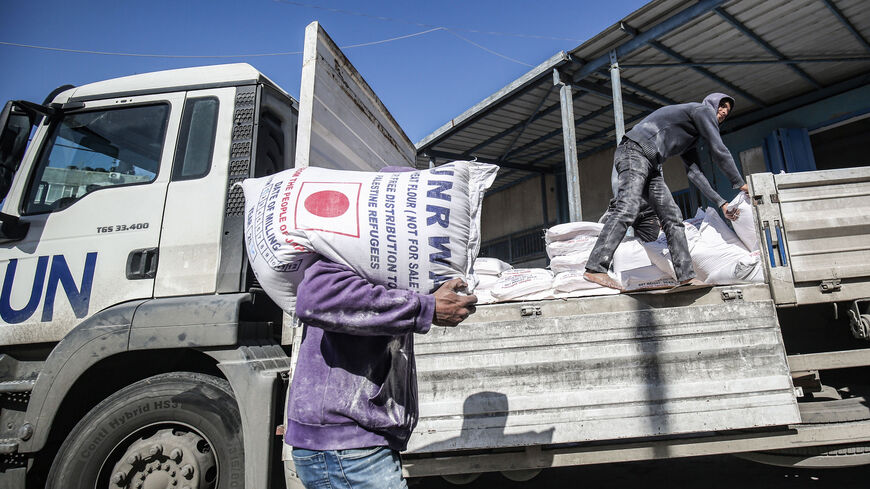 A man transports a sack of flour as people come to receive food aid from a United Nations Relief and Works Agency distribution center in the Khan Yunis camp for Palestinian refugees in the southern Gaza Strip on Feb. 2, 2020. - SAID KHATIB/AFP via Getty Images

RAMALLAH, West Bank — Rising  prices of food commodities and basic products in the Palestinian territories have pushed thousands of families below the poverty line.

The coronavirus pandemic, followed by the Russian-Ukrainian war, further worsened the situation. A May 9 World Bank report said that the pandemic has severely affected the well-being of Palestinians and created more poverty.

In another report published June 20, the World Bank said, “The poor nutritional status of the Palestinian population is worrying, with a high prevalence of micronutrient deficiencies among groups for whom good nutrition is particularly important, such as children under five years old and pregnant and postnatal women."

The report added, “In the West Bank and Gaza, … poor households especially have limited access to micronutrient-rich foods, such as red meat, fresh vegetables, and milk.”

Jawad Abu Saleh, advisor to the Palestinian Central Bureau of Statistics, told Al-Monitor that "at least a third of Palestinians suffer from food insecurity due to the pandemic alone.”

He added that the siege imposed on the Gaza Strip, and Israel’s control of 60% of the West Bank’s lands and borders, preventing farmers from reaching their lands, as well as the pandemic, are all reasons for food insecurity in Palestine. The situation has pushed thousands of families below the poverty line as breadwinners lost their jobs or stopped getting paid, according to Abu Saleh.

He further pointed out that should the Russian-Ukrainian war persist and prices continue to rise, the number of Palestinian families facing food insecurity would double.

An opinion poll conducted by the local Wattan Media Network in Ramallah, published on June 26, revealed that 50% of Palestinian families had to reduce their expenses, while 22% said they had to sell some of their properties, and 21% were forced to look for additional work to secure the expenses of their families.

Since the beginning of the Russian war, several international actors, such as the United States, have warned against food insecurity in the Gaza Strip. The Palestinian Economic Policy Research Institute (MAS) said in its recent Food Security Bulletin that less than half of Palestinian families were food secure in 2020.

Murar stressed, “The Russian-Ukrainian war has exacerbated food insecurity in Palestine, and all indicators confirm that many groups will soon face this issue, due to the monthly price hikes, specifically in grains, wheat, and oils.” Palestinian wheat stock is about to run out, he said, and “we are completely dependent on imports, whether from Russia, Ukraine or through the intermediary [Israel]. If we do not receive wheat soon, there are no immediate alternatives for it in Palestine.”

Murar noted, “The prices of bread increased by 20% to 30%, despite the government's measures and the exemption of bakeries from value-added tax,” pointing out that the rise in the prices of wheat, grains, and oils will greatly affect the poor and marginalized groups and the Gaza Strip in general.

He said that there are about 140,000 low-income families in the Palestinian territories suffering from food insecurity, who have only received a small aid payment from the government since 2020, instead of the eight payments they were promised. However, he said, the government has increased court fees and imposed compulsory fees on changing the plates of private vehicles in a bid to face the food crisis.

Murar added, “The government has not taken any steps to confront food insecurity, since it survives on financial aid and remittances, and has not, for example, built silos to store wheat or created a strategic food stockpile. It has offered zero solutions for this crisis.”