Egypt objected to the WTO agreements to alleviate the global food crisis, as it refuses to be forced to export food when it is grappling with its own food crisis. 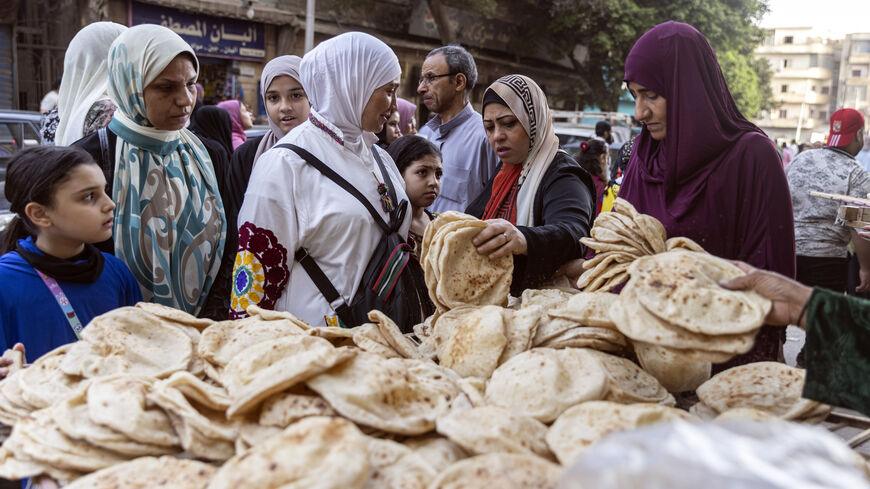 Women buy bread from a local bread stand in Al Fustat neighborhood on May 2, 2022, in Cairo, Egypt. Last month, Egypt introduced price controls on commercially sold bread in response to the rising price of wheat. Egypt imports 80% of its wheat supply from Russia and Ukraine, whose production and export have been disrupted by the invasion. - Roger Anis/Getty Images

In an effort to confront the food crisis threatening the developing and less fortunate countries in the world, the WTO is seeking to conclude two agreements among member states, one of which will focus on keeping global markets open without restrictions on the movement of exports, all the while increasing transparency with regard to the export and import of food.

The other agreement will focus on formulating a binding decision not to restrict exports to the World Food Program (WFP), which seeks to combat all kinds of hunger in places affected by wars, conflicts, natural disasters and climate change.

While most WTO member states expressed support for the two agreements during a June 14 meeting of the 164-member trade body, only Egypt, India and Sri Lanka have rejected these agreements, a WTO spokesperson said in a press conference.

In this context, Ahmed Kamal, spokesperson for the Egyptian Ministry of Supply and Internal Trade, told Al-Monitor via phone that Egypt had reservations about the WTO agreements amid concerns that some proposals in the agreements could adversely affect developing countries. Also, he said, a country cannot be forced to export food, let alone refrain from imposing market restrictions under a global food crisis.

He indicated that WTO can obligate major and developed countries to take such measures, but it is not reasonable for a developing country to be forced to export food while it is in dire need of it.

He pointed out that more than 30 countries have imposed restrictions on exports of food, energy, and some other commodities, so Egypt is not the only country to reject this, and its reservations are justified in light of its need for food amid a global crisis whose prospects are dim to say the least.

Kamal further pointed out that “the Egyptian population currently counts more than 103 million people, so it is illogical for Cairo to export food that we need. Egypt is not against helping poor countries, and its objection does not stem from an unwillingness to help developing and poor countries but from the fact that it does not want to find itself forced to export specific foods, especially when this food is needed at the local level.”

He added that Egypt imports approximately 65% ​​of its wheat needs from abroad, including 90% from Russia and Ukraine, saying that Egypt is currently in negotiations with India on a deal to import 500,000 tons of wheat. “Since Egypt is the largest importer of wheat in the world, we do not have the luxury of exporting food,” Kamal said.

Amr Madkour, adviser at the Egyptian Ministry of Supply and Internal Trade, said in a statement to Sada el-Balad channel on June 5 that the ministry decided to stop issuing ration cards to Egyptians who are traveling outside the country. He added that the ministry has already removed more than half a million citizens from the ration card system in order to rationalize consumption in light of the wheat crisis.

For his part, Hassan Nafaa, professor of political science at Cairo University, told Al-Monitor over the phone that Egypt’s refusal to support the recent WTO agreements comes in light of the food shortage plaguing the country, especially as far as grain and wheat are concerned, due to the Russian-Ukrainian war. This, he said, leaves Egyptian officials in doubt over their ability to sign the agreements, as they might not be able to fulfill their obligations in the future.

"In theory, Egypt can agree to the WTO agreement not to place restrictions on food exports, but we cannot know for sure whether Egypt will be able to implement the contents of this agreement, especially if the situation worsens in the near future in terms of food shortages and the global situation, and if the Russian-Ukrainian war degenerates. This may threaten an exacerbation of the global food crisis and a consequent rise in global prices,” he said.

Nafaa pointed out that Egypt is currently suffering from a water shortage crisis and is wrestling diplomatically in international forums to discourage Ethiopia from completing the third filling of the Grand Ethiopian Renaissance Dam (GERD) scheduled for July over its concerns over the dam’s effects on its share of the Nile waters.

In light of this, Nafaa continued, it is only normal for Egypt to impose new restrictions on the export of some foods, vegetables and fruits, as large quantities of its local crops could be damaged due to the shortage of water flowing from the Nile River due to the GERD.

He pointed out that Egypt requested $500 million in aid from the World Bank in late May in order to buy wheat in an attempt to overcome the economic crisis.

He also said that it is just unimaginable for a country suffering from a food shortage to export food, let alone be forced under international agreements to export some foods or refrain from placing restrictions on the export of food and agricultural products.

Abdel-Khaleq Farouk, director of the Nile Center for Economic and Strategic Studies, told Al-Monitor that Egypt and Sri Lanka in particular are considered among the largest importers of food in the world, especially grain and wheat in the case of Egypt.

He explained that the representatives of these countries have explicitly admitted during the WTO meeting that their ability to export food may be limited due to their basic need for it.

Farouk said that India has already imposed restrictions on the export of food, especially wheat, due to the damage caused to its local crops as a result of a heatwave. He added that Sri Lanka imports food in large quantities and suffers from bankruptcy and an already huge economic crisis.

“In the case of Egypt, we are a major importer of various types of food, grains, and wheat, and we largely depend in our food on imports from other countries, which is why Egypt has objected to the [WTO] agreements,” Farouk added.