Amid a severe shortage and soaring local prices, Egypt is exerting efforts to resume imports of vegetable oil from Indonesia and Malaysia. 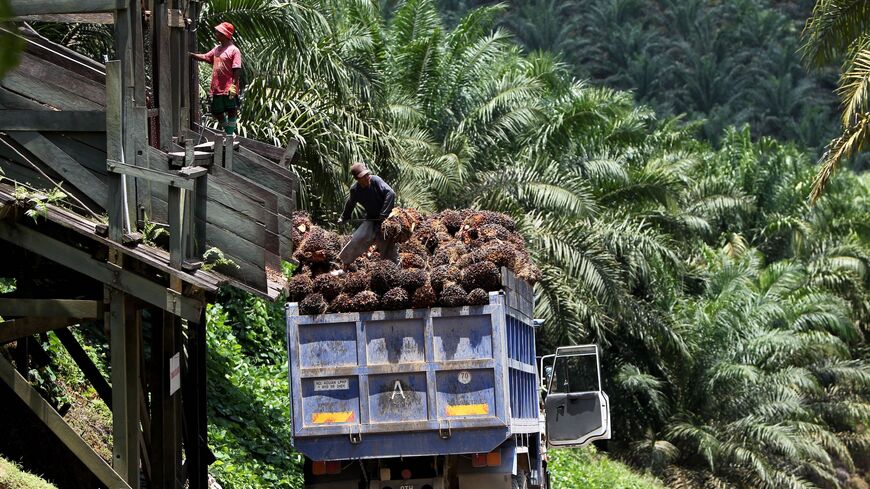 A picture taken on Sept. 25, 2011, shows a worker loading palm oil fruits onto a lorry at a plantation in Bintulu Sarawak. - MOHD RASFAN/AFP via Getty Images

The recent shortage of vegetable oil in Egypt has escalated the food supply crisis in the North African country, with prices climbing since May 15.

According to the new price lists for edible oils announced by Arma Food Industries Company and the Savola Group, two of the largest edible oil companies in Egypt, prices on May 15 registered 9 Egyptian pounds (about 50 cents) for a bottle of less than a liter and 23 Egyptian pounds ($1.23) for a 2.2 liter bottle.

On June 1, the Egyptian Ministry of Supply and Internal Trade announced that nearly half a million Egyptians have so far been removed from the ration card system. The system subsidizes bread and vegetable oil. The move came in light of the lack of supplies to Egypt, which imports 90% of its needs of vegetable oil, according to Amr Madkour, the ministry’s adviser.

Speaking to Al-Monitor via phone, Madkour explained that the vegetable oil shortage in Egypt is due to several causes, most notably the lack of a global supply due to the outbreak of the Russian-Ukrainian war. “These two countries are among the major exporting countries of sunflower oil. Egypt would import huge quantities of this type of vegetable oil from them,” he noted.

Madkour added, “All these factors combined have led to a rise in oil prices globally, which is reflected in the rise in prices in Egypt. The government is doing everything in its power to alleviate the crisis by supervising wholesalers and retailers to limit the exploitation of the crisis and exaggerated price hikes. In parallel, the state is seeking to conclude deals to import crude oil from several countries, most notably Malaysia, Indonesia and perhaps Argentina.”

In turn, a well-informed source at the Ministry of Planning and Economic Development told Al-Monitor that four state companies in Egypt produce vegetable oil, but they provide only 2% of the domestic needs of a country the size of Egypt with a population of more than 103 million people.

The source, who spoke on condition of anonymity due to not being authorized to speak to the media, clarified that these government companies, which are affiliated with the Holding Company for Food Industries, mainly carry out refining operations and some processes of crushing vegetable oil producing seeds.

This comes as Egypt faces a wave of high prices of vegetable oil in light of the supply shortage, especially after a Malaysian lockdown in the wake of the coronavirus pandemic and an Indonesian ban on the export of palm oil.

The source revealed that Egypt is in the process of concluding several deals with Malaysia in the coming period to resume the import of edible oils. “Malaysia is reopening its borders and resumed the production process at an accelerated pace to gradually return to pre-pandemic levels. The Egyptian government is also seeking to conclude agreements with Indonesia to resume imports. These are expected to see the light in the near future, especially after the Indonesian government lifted the ban on export of edible oil in May.”

Abdel-Khaleq Farouk, an economist and director of the Nile Center for Economic and Strategic Studies, explained to Al-Monitor that Egypt is already short on vegetable oil used in the production of most foodstuff that Egyptians consume. “It is only logical for the government to exert all possible efforts to secure the country’s needs of vegetable oil and to conclude deals with Indonesia and Malaysia to import oils again,” he said.

He argued that the relative calm in these countries and the return of exports with the easing of restrictions imposed by those countries on exports is a great import opportunity for Egypt and a number of other countries suffering shortages in vegetable oil.

Farouk pointed out that Indonesia had decided to ban the export of vegetable oil to tame internal criticism in the country after the local rise in prices of these oils. “This decision, however, backfired for a number of countries with high population density that depend on Indonesia to meet their needs, namely Egypt, India and Pakistan,” he said. “Vegetable oil prices are likely to drop gradually with the expected relative stability and the resumption of import operations soon.”