The novel coronavirus is threatening to inflate food prices in Turkey, whose agricultural sector was already in dire straits and overly reliant on imports before the pandemic. 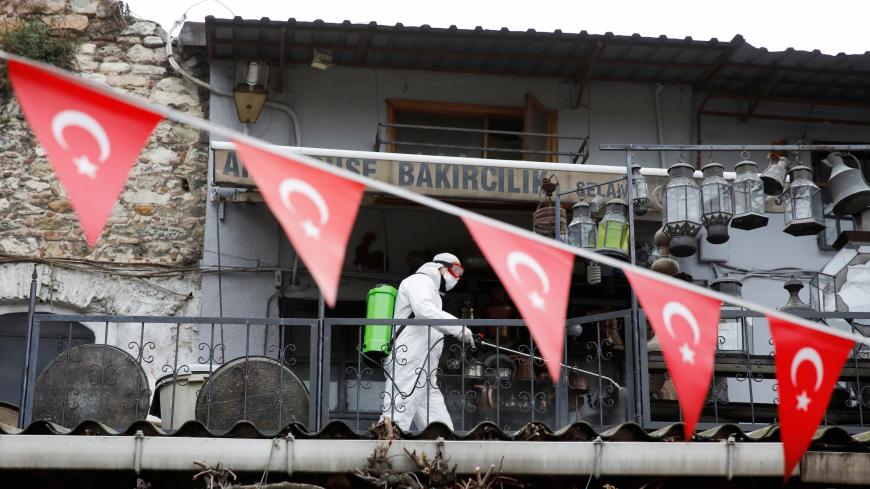 A worker in a protective suit sprays disinfectant at the Grand Bazaar to prevent the spread of the novel coronavirus in Istanbul, Turkey, March 25, 2020. - REUTERS/Umit Bektas

Turkey’s long-running problem of agricultural shortages and food inflation could worsen under the impact of the COVID-19 pandemic, as the government has relied on imports to fill the gaps instead of encouraging domestic production.

Procuring food and other agricultural products could become increasingly hard for import-reliant countries as food security risks fueled by the pandemic are already forcing governments to restrict exports.

According to the UN Food and Agriculture Organization, the world risks a looming food crisis “unless measures are taken fast to protect the most vulnerable, keep global food supply chains alive and mitigate the pandemic’s impacts across the food system.”

Amid disruptions in global production chains, countries are under pressure to seek “nativist” solutions and prioritize their own food security, with some banning the exportation of foods sold overseas before the pandemic and others scrambling to stockpile as much as they can or produce locally what they used to import. Lockdowns and other restrictions to stop the contagion have led to labor shortages in many places, aggravating the hardships of farmers and food industries. Shortages in inputs such as fertilizers, seeds and pesticides could present additional risks to global agricultural supplies and stoke food inflation.

Turkey’s agricultural sector, already in decline in recent years, has become even more fragile under the economic blows of the pandemic. The government of President Recep Tayyip Erdogan has taken only short-term, superficial measures for the sector as for other branches of the economy, treating the pandemic as a transient problem that will be soon overcome. With Turkey’s economy already ailing, the government’s main concerns have been political, specifically to avoid further voter discontent. Hence, its measures for the agricultural sector thus far have focused on sustaining the importation of raw materials and reinforcing stocks, again through imports, despite the country’s scarce hard currency reserves. This policy is not only demoralizing local producers, but also preventing them from making long-term plans while deepening mistrust in the government.

Turkey’s import appetite had grown in the first half of the past decade as cheap hard currency prices — the result of easy access to foreign funds at the time — made it convenient to buy from abroad instead of producing at home. As a result, Turkey turned into an importer of livestock and raw materials for vegetable and animal production, frustrating its own farmers. Yet, as foreign currency prices began to rise in 2014, imported agricultural and animal products as well as inputs such as fertilizers, pesticides and machinery became costlier, aggravating the problems of an import-reliant agricultural sector and insufficient domestic production. The rising cost of imports, coupled with supply shortages, fueled food inflation, which shot up further under the impact of the currency crisis in 2018.

All those problems had yet to be overcome when the novel coronavirus outbreak hit.

The holy month of Ramadan, which this year began on April 24, is usually a time of higher food prices in Turkey as people treat themselves to lavish fast-breaking dinners. The uptick is now likely to spike further under the impact of the pandemic. In a gloomy harbinger, food prices rose nearly 2% in March, when COVID-19 officially reached Turkey, well above the 0.6% overall consumer inflation.

In the global agricultural network, Turkey has been an exporter of fresh fruits and vegetables and an importer of grains and oilseeds. Due to export restrictions by other countries, Turkey is now bound to experience hardships in importing the products it needs, creating trouble for vegetable oil producers as well as the animal feed industry and therefore the husbandry sector. Also, many food producers have come to rely on imported wheat to produce flour, pasta and other products, meaning that disruptions in the supply of raw materials could lead to idle facilities in the food industry.

One of the biggest lessons the COVID-19 crisis is teaching Turkey is that it must learn to produce locally all those products it had carelessly imported. Obviously, this cannot be achieved overnight, even if decision-makers are prepared to go ahead with measures to do so. Yet, local farmers need to have confidence that they are being protected, encouraged and supported, especially in terms of the inputs they need.

Price increases in agricultural inputs, many of them imports, had alarmed Turkish producers even before the pandemic. In February, for instance, seed prices were up 19% on a year-on-year basis, followed by increases of 18% in fertilizer prices, 12% in fodder and 8% in pesticides.

Such upticks have translated to increases in producer prices, which reached nearly 12% in 2018 and then 23% in 2019 before easing to 18.5% on year-on-year basis in March. This trend speaks of a sticky food inflation likely to rise further.

According to official data, the main products on which Turkey relies on imports to cover domestic demand include wheat, barley, corn, cotton, soybeans, sunflower seeds, paddy, haricot, red lentils and chickpeas. Their importation already produced hefty bills before the pandemic.

Turkey now needs urgent measures to encourage the production of those basic items in the short run. Then, in the medium term, it needs to increase output in a planned manner, based on population projections and the demand projections of agricultural industries. Barring legumes, these products require advanced cultivation techniques, including irrigation, so irrigation investment must be ramped up.

Erdogan’s government remains under fire for focusing on stopgap measures. Wary of losing voters, it seems to concern itself with appeasing consumers through imports rather than reviving production, which requires time and patience.