Turkey's leaders are accusing grocers of price gouging amid soaring food prices, but refuse to acknowledge the cause of the problem: the country’s shrinking agricultural supply. 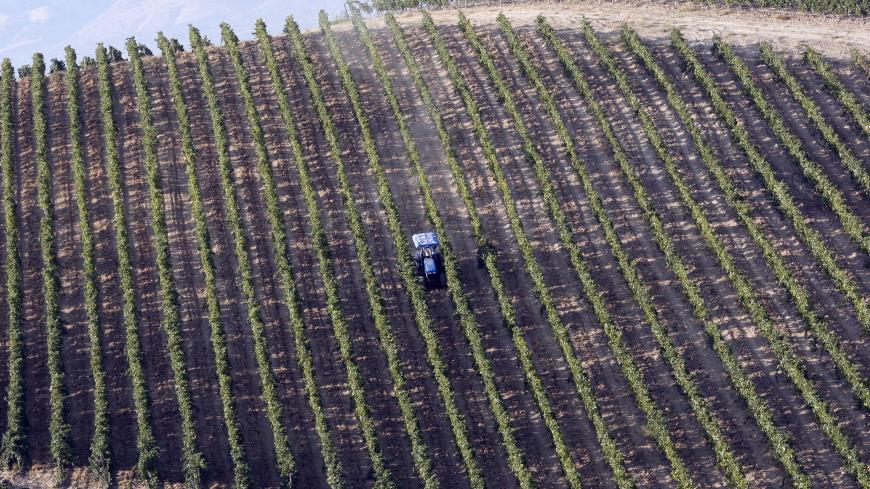 A worker drives in the Pendore vineyard run by Kavaklidere Wines during the harvest in the western Turkish village of Kemaliye in the Aegean region, Aug. 28, 2009. - REUTERS/Murad Sezer

Soaring food prices have emerged as one of Turkey’s gravest economic woes, and everyone seems to agree now that food inflation will be a major factor in the March 31 local elections. True to style, the ruling Justice and Development Party (AKP) has sought to rein in the prices through coercive measures, refusing to acknowledge the core of the problem.

In November, the authorities raided onion depots at the behest of President Recep Tayyip Erdogan, who blamed hoarders for the surging price of onions, a key staple of Turkish cuisine. The raids, however, failed to bring the prices down and ultimately, the government had to zero down tariffs on onions to cheapen imports.

More recently, Erdogan lashed out at groceries and supermarkets over fruit and vegetable prices as some of them reached unprecedented levels. “Interest rates and inflation have declined, but the prices of fruits and vegetables at grocery stores continue to rise,” he said Jan 21. “If grocery stores continue to try to exploit my people, it is our duty to hold them to account and we will.” In response, supermarket chains chose to do away with some products, including eggplants and green peppers, instead of selling them at the soaring prices and risking the wrath of the government.

Someone had to remind Erdogan, however, that the ostensible drops in interest rates and inflation owed to tax reductions introduced by the government and that those incentives had no impact on food prices, fueled mainly by the rising cost of imported agricultural inputs such as fertilizers, pesticides and fodder. How can one pull down prices if one cannot decrease the cost of inputs?

According to the Turkish Statistical Institute (TUIK), agricultural producers increased their prices by 16% in 2018, while the prices of industrial products rose nearly 34%. The 18-point gap points to a sharp trend of decoupling after 15 years of largely parallel trends in the two sectors. It means that Turkey’s already ailing agriculture could shrink further as more producers lose hope in the sector and quit.

While seeking to discipline prices through imports — an effort that will come to nothing — the AKP government has refused to confront the core of the problem, which is the shortage in agricultural supply. The Central Bank referred to the issue in an inflation report last year, saying, “Occasional supply shortages in unprocessed food products in Turkey that lead to sudden and sharp price increases mainly stem from structural factors. Here, the inability to make an efficient and dynamic agricultural production plan is considered to be a significant structural problem. Developing a production plan requires strengthening of agricultural statistics, yield estimation and early warning system infrastructure.”

The import measures serve nothing but to further discourage producers, who have been already quitting the sector. The share of agriculture in gross domestic product shrank to 6% in 2017 and 5.7% in the third quarter last year, down from 10% in 1998.

Turkey, which has major potential for agriculture and husbandry, has seen its agriculture decline since the 1980s, when Ankara began cutting support for the sector. Public enterprises that significantly propped up the sector prior to 1980 were privatized for being a burden on the treasury. While all European Union countries maintained and occasionally even boosted support for agriculture, Turkey moved in the opposite direction in the name of fiscal discipline. In April 2006, a new agriculture law ostensibly guaranteed support to farmers, stipulating that budget funds allocated to that purpose should amount to at least 1% of GDP. Yet, according to Turkey’s Agricultural Chambers Union, the figure has hit as low as 0.56% of GDP.

Last year, primary expenditures rose nearly 22%, while agricultural supports increased only 14%, accounting for less than 2% of budget expenditures, although the agricultural sector provides nearly 19% of all jobs in the country.

The waning support has driven many producers away. As of October 2018, the share of agricultural jobs in overall employment was 18.4%, down from nearly 36% in 2000, according to official figures. The data show that 2.4 million people quit the sector in that period, bringing agricultural employment down to 5.3 million people.

Standing out here is the migration of young rural generations to urban areas without trying their hand at agriculture at all. According to Agriculture Ministry estimates, the average age of farmers is 55. Projects aimed at raising “young farmers” appear far from yielding results as they remain limited to handing out grants of 30,000 Turkish liras (about $6,000) to young people.

Stockbreeding is in a decline as well amid shrinking pasture areas and low grass yields. As a result of policies promoting stockbreeding reliant on industrial fodder, more than 50% of raw materials used to make fodder have become dependent on imports. Due to the sharp depreciation of the Turkish lira and the resulting increase in the cost of imports, fodder prices have shot up, dealing another blow to stockbreeding. In terms of barley and corn, two key inputs for the fodder industry, the country’s self-sufficiency rates stand at 89% and 88%, respectively, necessitating imports for fodder.

In sum, the steep increase in foreign exchange prices has aggravated the structural problems of agriculture, leading to fresh hardships that discourage farmers from soldiering on. What needs to be done is to outline a thorough approach — from field to table — and draw up solutions to chronic problems, primarily the high input prices, the demotivation of farmers, the rising average age of farmers and drawbacks in the marketing chain that push prices up until they reach the consumer. Other important issues that need to be addressed include output losses, disasters stemming from climate change, the negative impact of imports and the poor organization of producers.

A comprehensive agricultural policy encompassing all those problems, coupled with determination to follow it up on the ground, will make for an efficient first step to revive Turkish agriculture.