Many states across the Middle East and North Africa meet the criteria for food insecurity, experts said at a US Institute of Peace event. 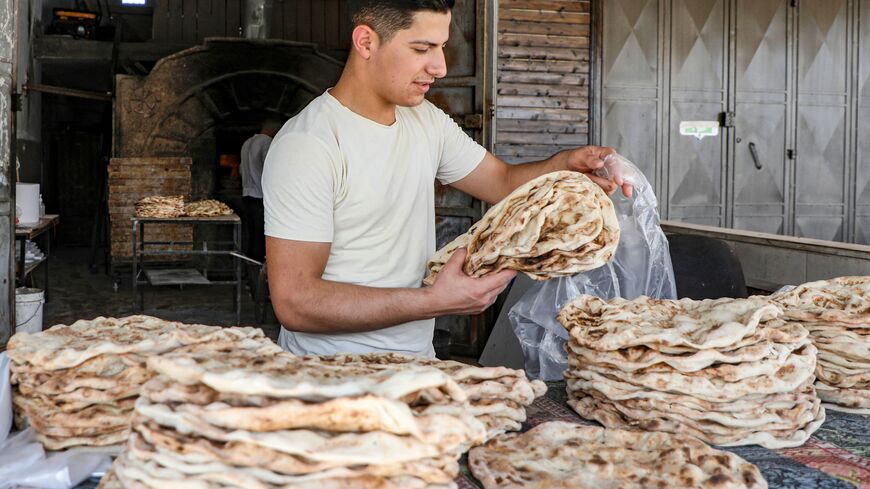 A Palestinian baker packages fresh bread at the old market in the West Bank city of Nablus on April 17, 2021, during the Muslim holy month of Ramadan. - JAAFAR ASHTIYEH/AFP via Getty Images

Much of the Middle East and North Africa is suffering from food insecurity related to the Russian invasion of Ukraine.

The United States Institute of Peace hosted a virtual event on the topic June 30. The World Bank’s Haneen Sayed, who specializes in development, said that though the Middle East only has 6% of the world’s population, it has 20% of the world’s food-insecure people.

The World Bank identified the following criteria for determining food security related to the Ukraine war:

With that, Sayed identified Lebanon, Syria and Yemen as the most food-insecure countries in the region at present. Lebanon, with only one month of grain reserves, is the most affected, according to her. She added that Egypt, Tunisia, Morocco and Iraq also suffer from food insecurity.

Jordan is faring better due to its 15-18 months' worth of grain receivers. Algeria also has four months of reserves, according to Sayed.

“Maybe that’s one lesson,” she said at the event. “Build up your grain reserves.”

World Food Program economist Arif Husain also discussed how exactly the war is affecting countries’ food supplies. When wheat from Ukraine and Russia becomes unavailable, countries must import wheat from elsewhere, which adds to time and freight costs. This expense is then passed on to consumers. Poor, indebted countries that import much of their food, fuel and fertilizer are most vulnerable, according to him.

“There is food in the world; it’s just not where it is needed and it’s not at a price that is affordable,” Husain said.

A new report from the American humanitarian organization Mercy Corps relatedly demonstrated the negative impact the Russian invasion of Ukraine is having on the Middle Eastern economy.

Mercy Corps released a report June 29 on the Ukraine war’s impact on food and fuel supplies in the Middle East. The war began in February of this year. The following is a breakdown of how some parts of the region are being affected, according to the report:

Wheat and flour prices increased 42% between January and May, while cooking oil prices went up by 62.8% between February and April. Yemen receives 42% of its wheat products from Ukraine and Russia.

Fuel prices went up 19% between February and March but are now close to pre-Ukraine war levels due to Saudi Arabia easing its blockade of the country.

Lebanon “continues to face high food costs,” as food prices were already up 400% when the war began, Mercy Corps said.

Fuel prices in June are nearly triple what they were last September.

Food prices increased throughout Syria between January and May, especially those of cooking oil and wheat. Cooking oil prices went up as much as 64% in that timeframe in southern and central Syria.

Fuel costs increased 40% between January and May.

Vegetable oil prices went up by more than 20% between January and May.

Wheat prices only increased 8.1% between January and May, in part due to the country’s large wheat reserves.

Fuel prices have only increased 2.4% due to government subsidies.

The cost of fuel imports from Egypt increased 10% in March.

Many entities have offered similar assessments of the Ukraine war’s effects on the Middle East. Al-Monitor reported back in February that sunflower oil exports to the region were likely to be affected by the war. In April, S&P Global said outputs decreased and prices increased substantially in Egypt’s non-oil sector. The same month, the International Monetary Fund said oil producers were better prepared to deal with the Ukraine-related economic fallout. This is in line with Mercy Corps’ assessment of Iraq’s fuel prices.

The United Nations also said in April that worldwide food prices were at their highest levels ever.

The price hikes in the Middle East are consistent with the rest of the world. Benchmark oil and wheat prices also increased in February and remain high, according to market data.

Some countries in the region were already suffering before the Russian invasion. The civil war continues to rage in Yemen, where people are struggling with high temperates, displacement and water shortages, among other problems.

Lebanon has been suffering from an economic crisis since 2019 that has been marked by severe electricity shortages, the collapse of the Lebanese currency and more.

Mercy Corps’ report did not focus heavily on Egypt, but the North African country has also been severely hit by the Ukraine war. Egypt is the largest wheat importer in the world and received most of its grain from Russia and Ukraine before the war. Egypt is now working to import wheat from India.

This article was updated on June 30 to include the USIP event.