World food prices in March reached their highest levels ever, according to the United Nations. 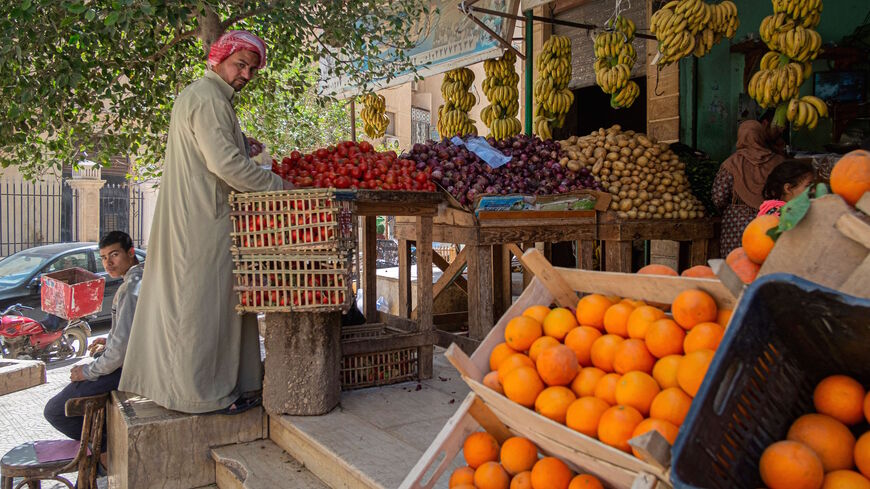 An Egyptian man arranges fruits at a shop in a market in Cairo, Egypt, March 17, 2022. - Khaled Desouki/AFP via Getty Images

The Food and Agriculture Organization of the United Nations said today that food prices are at their highest levels ever.

The UN body said its food price index rose 12% in March, reaching its highest level since its inception in 1990. The price increases are largely due to disruptions caused by the Russian invasion of Ukraine. Russia and Ukraine are combined responsible for 30% of global wheat exports and 20% of global corn exports, the Food and Agriculture Organization said in a press release.

Many states in the Middle East and North Africa have been negatively effected by the price increases. The following is a rundown of some recent food-related developments across the region:

Egypt is one of the largest wheat importers in the world and gets more than 80% of its wheat from Russia and Ukraine. Bread prices have risen significantly in the country since the war broke out in February, prompting several actions from the government. Last month, President Abdel Fattah al-Sisi directed the military to provide food to needy Egyptians at reduced prices. The country has also ramped up domestic wheat production and sought exports from other countries, including India and the United States. The government also instituted price controls for bread last month.

Most recently, on April 4, the Egyptian government allocated more money for domestic wheat production. Egypt’s wheat harvest typically runs from April to May.

Lebanon gets 80% of its wheat from Ukraine, and the war has led to price increases, prompting the UN’s World Food Program (WFP) to send aid. Food prices in Lebanon were already out of control before the war, though. In 2021, families’ essential food costs rose 351% in Lebanon amid the financial crisis, according to a WFP press release from last week.

The embattled Lebanese government has banned food exports in response, though Lebanon does not export a lot of food. They are also reportedly seeking new wheat sources.

The Syrian economy was already weak due to the continued war and US sanctions. Price increases related to the war in Ukraine are now driving discontent. The New Arab reported today that some Syrians are demanding the government stop food exports to help alleviate domestic price increases.

In Turkey, people panic bought sunflower oil last month due to concerns about shortages. Several countries in the Middle East rely on Ukraine for sunflower oil.

There were protests in Iraq last month against rising food prices. The government blamed the situation on the war in Ukraine.

In February, before the Ukraine war started, falafel prices began rising in the Gaza Strip, leading to widespread resentment. Falafel restaurants raised prices due to increase in food costs in recent years.

Many Tunisians are concerned about food shortages. This prompted the president to issue a decree this month criminalizing “fake news” about the country’s food situation.

The Food and Agriculture Organization is not alone in its assessment. Late last month, the WFP also reported rising food prices across the Middle East and North Africa, as well as an uptick in hunger.