While oil producing countries are projected to benefit from a windfall due to high energy prices, for others the coming years "will be more challenging than ever." 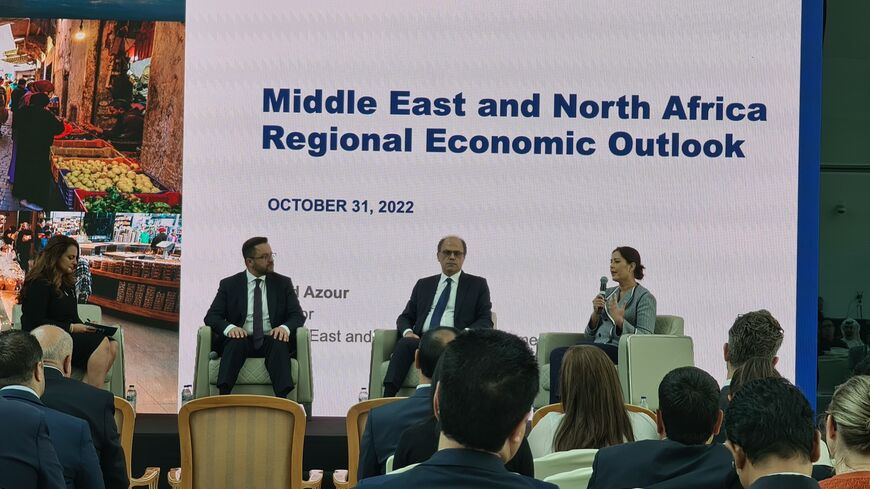 “We have to expect that the next couple of years will be more challenging than ever,” said Jihad Azour, director of the Middle East and Central Asia Department at the IMF.

While this is an increase from last year’s 4.1% growth, the report also predicts that growth will take a steep turn at 3.6% next year.

There are major differences between countries of the Middle East and Central Asia, with crude producers still benefiting from high energy prices that are projected to accrue an oil windfall of about $1 trillion over the next four years.

High oil prices and robust non-oil GDP growth are offsetting the impact of high food prices as a result of the Ukraine war that started in February, but that is not the case for others.

Growth in low-income countries is expected to remain weak at 0.8% in 2022 as a result of country-specific fragilities and high commodity prices.

High commodity prices and food shortages could lead to further security issues in the near future with fertilizer costs on the rise amid low strategic reserves, serving as a potential risk to agricultural harvests in 2023 and possibly leading to social unrest.

Food affordability and availability were the two main challenges identified with food security at the “Mounting Challenges and Decisive Times in the Middle East and North Africa” panel at the event.

There is an important need to reduce trade barriers, especially with fertilizers, said the IMF regional director, answering Al-Monitor’s question about its impact on future food security at the discussion.

“This is important for the short term. For the medium term, we have several countries in the region that used to be bread baskets or exports of food-related items. Those require additional investment and additional stability in their functioning of the market and the improvement of their infrastructure,” said Azour, adding that Europe is in demand for more agricultural products from countries like Sudan and Morocco in North Africa, among others.

Jordan’s finance minister contributed to answering Al-Monitor’s question addressed to the panel by defining its approach of being proactive versus reactive to food security crises, as it did in response to the potential food security risk of the COVID-19 worldwide pandemic it faced in April of 2020.

“Jordan actually took a strategic decision to increase its reserve of wheat for 18 months, at prices that were very favorable, rather than wait for the frenzy to happen,” said Mohamad Al Ississ, adding that Jordan has improved its supply chain as a result accordingly.

Regarding today’s food product issues, the region is rich in fertilizer raw material, which Ississ said could be an opportunity for the Arab countries to provide a needed resource for global communities amid this trade and food crisis.

“There is a trilateral regional cooperation we’ve been calling for with the UAE, Jordan and Egypt to actually invest in going up the value chain and translating these raw materials into readymade fertilizers that the markets are very thirsty for,” he said.

Revised from the IMF’s April report, lagged effects of higher food prices and exchange rate depreciations, in some cases, are forecast to lead to high inflation for most countries in the Middle East and North Africa, remaining in the double digits in 2023 for the third consecutive year.

Low-income countries are predicted to face high imports focused on essential food and energy items. They are expected to face severe food security challenges along with a need for international aid to secure staple imports.

International financial institutions along with some oil-exporting countries in the GCC are providing some support and investment in these countries, but more needs to be done to achieve financial relief.

“I think many countries in the Middle East and North Africa have had to raise interest rates to be able to attract or at least retain portfolio inflows, and if they need to go to the market in order to issue debt, to finance what’s left of their external deficits, then they will have to pay more for that as well,” Khatija Haque, chief economist and head of research at Emirates National Bank Dubai.

“I think that the higher the global interest rates go, the faster the fed (federal government) raises rates, the more risk there is really of a financing crunch in MENA,” said Haque.

Restoring price stability by tightening monetary policy and protecting the vulnerable while ensuring fiscal sustainability, indicates the October 2022 report, are some of the ways countries can mitigate the cost of living in the region.