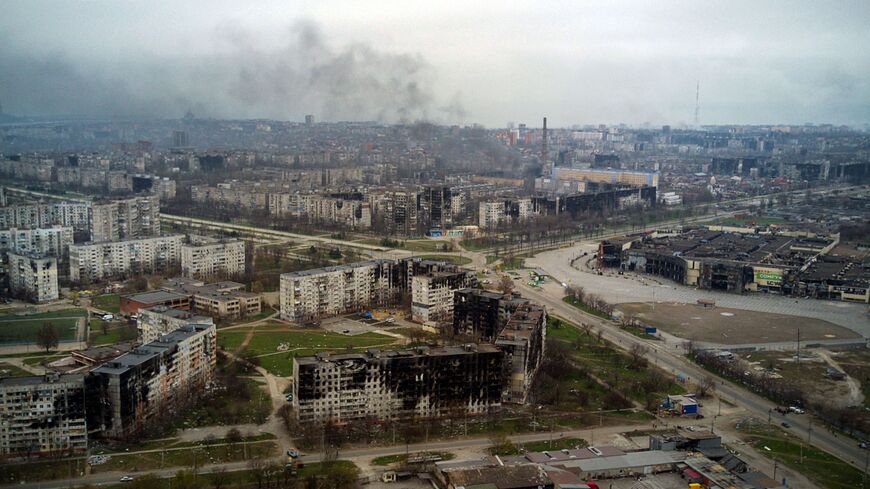 An aerial view taken on April 12, 2022, shows the city of Mariupol, during Russia's military invasion launched on Ukraine. - ANDREY BORODULIN/AFP via Getty Images

Middle East dividing line: Those with oil and those without

Last month, Perthes warned that Sudan was destined for economic and security collapse unless a political solution is reached to restore a functioning government.

Burhan responded by accusing Perthes of interfering in Sudan’s domestic affairs and overstepping his mandate.

Egypt is sending more humanitarian and logistical support to Sudan ahead of Ethiopia's third filling of the Grand Ethiopian Renaissance Dam (GERD), which Cairo and Khartoum fear will impact their water supplies.

The aid announcement follows Burhan’s surprise visit to the Egyptian capital late last month, where he and President Abdel Fattah al-Sisi discussed coordination over the megadam on the Blue Nile.

Libyan authorities are detaining human rights campaigners on charges that the United Nations and Amnesty International believe to be fabricated.

Since November 2021, Libya’s Internal Security Agency has arrested seven activists in Tripoli, accusing them of apostasy and contempt of Islam.

Mustafa Fetouri reports that such charges are rare in war-ravaged Libya, which is ruled by two rival governments after more than a decade of civil war. He writes that “many believe the whole episode is just a pretext to suppress free speech in the restive North African country.”

Sibel Hurtas writes that the rising costs have exposed long-running problems in the country’s agricultural sector, including its increasing reliance on imported materials to make livestock fodder and fertilizers. (Russia and Ukraine are providers of such materials.)

Plus, Mustafa Sonmez explains why Turkey’s chronic income inequalities are exacerbated by the soaring inflation, which is set to top 100% in the fall.

When a massive dust storm blanketed large parts of Iraq earlier this month, the reduced visibility provided cover to Islamic State fighters who carried out a deadly attack on Iraqi army soldiers stationed in the country’s westernmost province.

Shelly Kittleson has the details on the April 9 attack, which killed two soldiers near the town of Hit. The attack came one day after an armed drone allegedly from Iran-linked armed groups was shot down at a major base hosting coalition forces.

If you missed Al-Monitor’s breakfast briefing with Israeli Ambassador to the United States Michael Herzog last week, listen to Andrew Parasiliti’s conversation with him here.