Al-Monitor/Premise poll: Majority in Egypt, Turkey and Tunisia on edge over food access

In an exclusive poll in five countries across the Middle East and North Africa, 68% majority of the population worried about their ability to access food. 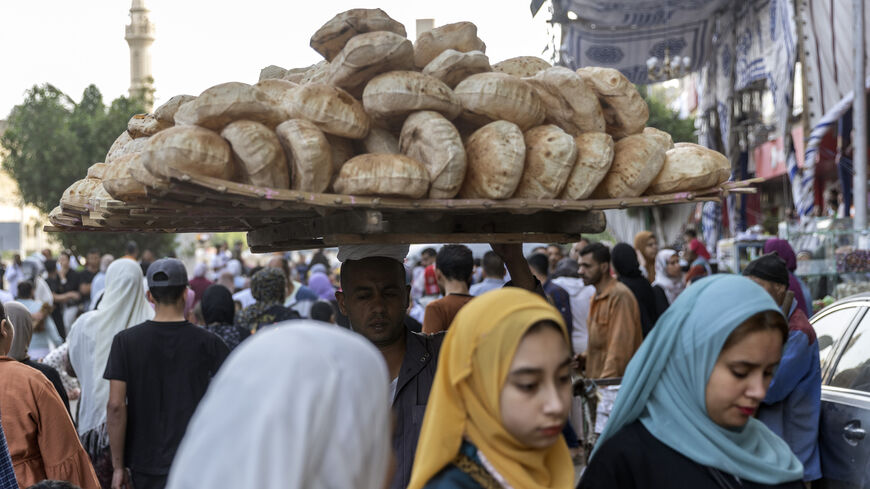 An Egyptian vendor carries a rack of Egyptian traditional baladi bread in Al Fustat neighborhood on May 2, 2022, in Cairo, Egypt. Egypt imports 80% of its wheat supply from Russia and Ukraine, whose production and export have been disrupted by the invasion. - Roger Anis/Getty Images

It was soaring food prices that sparked the popular uprisings throughout the Middle East and North Africa in 2011, but it is unprecedented increases in food and energy prices since the outbreak of Russia's war in Ukraine last February that now have a 68% majority of the population in Egypt, Turkey, Yemen, Tunisia and Iraq worried about their ability to access food in the coming months, according to an Al-Monitor/Premise poll.

According to the Food and Agriculture Organization, global food prices in 2022 were up by 14.3% compared to 2021, marking the highest increase on record since 1990.

While most respondents (62%) say they have so far been able to find the food goods they need, there is growing concern as to whether this will be the case in the weeks and months to come: 41% said they were somewhat concerned and 27% said they were very concerned about their household’s ability to access food in the next six months.

Out of the five countries surveyed, the situation seems particularly pronounced in Turkey where a combined 75% say they are somewhat concerned (44%) and very concerned (31%), followed by Tunisia (73%). And the situation doesn’t seem to be getting any better.

Annual headline inflation in Egypt rose to 21.9% in December, up from 19.2% the month prior. The Egyptian government said inflation is in part due to food prices as well as the cost of gas, electricity and housing, among other things. Wheat supply has been particularly troubling for the world’s largest importer over the past year. Egypt was importing up to 80% of its needs from Russia and Ukraine before the war broke out. It has since sought wheat from a variety of sources.

The same goes for Tunisia, which was importing half of its cereal needs from Russia and Ukraine before the war. Reuters reported that the country’s food trade deficit had doubled to 1.559 billion dinars ($496.99) in the first half of 2022 compared to the first half of 2021 as a result of costlier imports of cereal and sugar. The phasing out of subsidies on food and energy in line with IMF requirements to secure a $1.9 billion loan from the institution will undoubtedly bring about further price increases. According to the Tunisian Central Bank, overall inflation is set to reach 11% in 2023, up from 8.3% in 2022.

In Turkey, annual consumer inflation reached a 24-year high of 85.5% in October before easing to 84.4% in November and 64.27% in December, though the year-end slowdown is relative as it’s attributed to a favorable base effect. Food prices rose nearly 1.9% in December compared to November, while annual food inflation stood at 78%, according to data by the Turkish Statistical Institute.

As for war-torn Yemen, international organizations regularly describe famine-like conditions. In June of last year, the World Bank noted major wheat, flour and cooking oil price increases on the back of the Russia-Ukraine war. Yemen traditionally received more than 40% of its wheat products from Ukraine and Russia.

Unsurprisingly, a majority of the survey participants said bread prices had increased in their local markets over the past month, though Egypt appears to be in the worst situation, with 54% reporting a large price increase. No other country had more than 50% of people report a large bread price increase. This can partly be attributed to the fact Egypt’s per capita consumption of bread hovers between 150 and 180 kilograms, which is more than double the global average of 70-80 kilograms.

It is perhaps worth noting that only 19% of Tunisian respondents reported a large price increase in bread and 40% said the price had stayed the same. Again, this finding doesn’t come as a surprise given the sensitivities surrounding the cost of bread. The heavily subsidized staple triggered a series of violent riots in the 1980s and is also at the heart of the 2011 uprisings during which protesters chanted what translated to “Yes to bread and water. No to Ben Ali!” referring to Tunisia’s former president who had ruled over the country since 1987.

Despite the increases elsewhere, bread is not the food people in the region have been eating less of. Instead, the vast majority of the surveyed countries are resorting to purchasing less meat and/or poultry (40%), while 22% said they were buying less produce such as fruits and vegetables and 18% said they were eating out at restaurants less. Price increases seem to have also prompted the majority (72%) to abandon the food items they usually bought.

Whether the region’s food availability concerns are validated in the coming months remains to be seen. As for now, most countries, with the exception of Tunisia, seem to have been able to find the foodstuffs they were after at the places they normally shopped from: 71% of Egyptians, 71% of Iraqis and 80% of Turks said that the food their household wanted was available at their usual stores in the timeframe during which the survey was conducted. In Tunisia, this figure stood at just 32%, and some 53% said they were not able to find the food their households needed at the places they usually bought from. Indeed, over the past few weeks and months, Tunisia has been experiencing some severe shortages of key staple foods such as milk and coffee.

That said, it is worth noting that not all of the region’s countries are in as dire a position as Tunisia or Egypt. Those with financial buffers, especially hydrocarbon-rich countries such as Qatar, the United Arab Emirates and Saudi Arabia, are faring relatively better in terms of procurement but also in terms of investment into adapted and sustainable agricultural practices that will help meet their future needs. Yet these countries too still have a ways to go. It is estimated that Gulf states currently import up to 90% of their food needs.