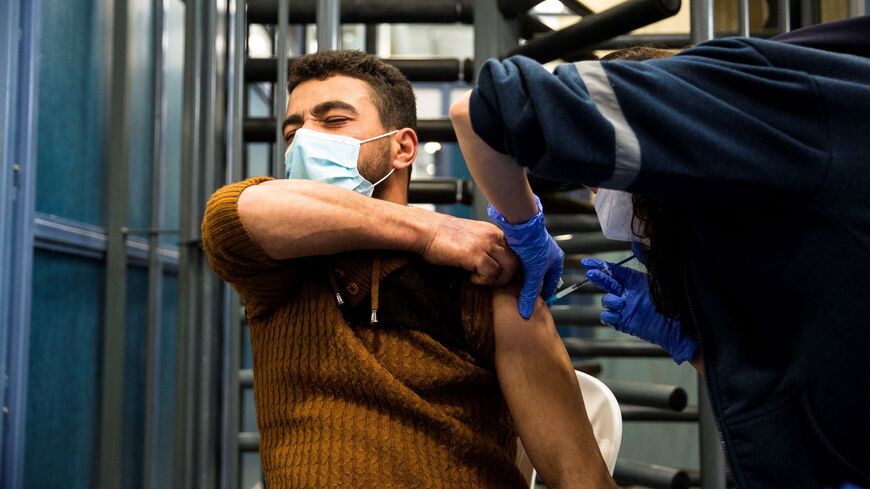 A Palestinian man who works in Israel receives the first dose of a Moderna COVID-19 vaccine by an Israeli medical worker in a crossing checkpoint between the West Bank and Israel on March 9, 2021 in Meitar, Israel. -

The World Bank presented a report on the Palestinian economy today to the Ad Hoc Liaison Committee in Brussels. The biannual committee coordinates aid to the Palestinian Authority (PA). The following is a breakdown of some highlights of the report:

COVID-19: The Palestinian economy grew 7.1% in 2021, which The World Bank attributed to coronavirus-related restrictions being “significantly eased.” The pandemic response pushed more than 110,000 Palestinian into poverty, according to the report.

The World Bank said that the May 2021 war between Israel and Hamas “slowed” Gaza’s economic recovery from the pandemic. The war resulted in severe damage to the enclave.

Fiscal health: Economic recovery from the virus led to tax revenues increasing by 28%. The $153 million sent by Israel in September helped the fiscal situation, but the PA has been paying employees’ salaries only partially since November. The amount owed is now nearly $4 billion including pensions, according to the report.

Israel agreed to send the $153 million loan to help keep the Palestinian government afloat. The transfer bypassed Israeli terrorism laws related to the PA paying families of Palestinians who have been imprisoned or killed by Israeli forces, including those who have conducted armed attacks against Israel.

The PA also “significantly increased” its borrowing from Palestinian banks in 2021. Public debt reached $2.5 billion by the end of the year, according to the World Bank.

The percentage of the PA’s debt to the Palestinian gross domestic product has increased significantly since the pandemic began. The debt-to-GDP ratio reached 89% at the end of 2020, according to the data firm CEIC in Hong Kong.

Israel: The World Bank added that Israel should do more to loosen some restrictions on the Palestinian territories. These recommendations include:

Area C is a part of the West Bank that is controlled by the Israeli military. Hundreds of thousands of Israeli settlers live in the area, in addition to Palestinians.

“External trade is controlled by Israel and subject to a range of costly non-tariff barriers that have reduced the competitiveness of Palestinian exports — one of the key potential drivers of growth — and contributed to a large external trade deficit,” read the report.

Know more: The World Bank is significantly involved in assessing and improving the Palestinian economy. In February, the DC-based financial institution provided the PA a new grant to help fight COVID-19. The same month, they released a report noting improvement in the Palestinian digital economy.