Al-Azhar's new fatwa prohibiting women from praying without a headscarf has renewed the hijab debate in Egypt. 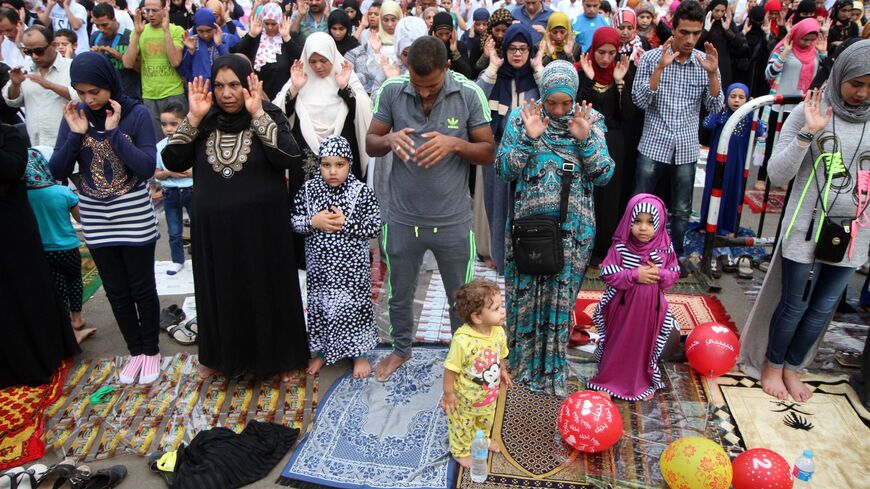 Muslim Egyptians perform the morning prayer of the Eid al-Adha holiday in the capital Cairo on Sept. 12, 2016. - AFP via Getty Images

On July 8, Al-Azhar's Global Center for Electronic Fatwas published its “Eid Prohibitions,” a series of measures to observe during Eid al-Adha, on Facebook. One forbids women from leaving home without the hijab.

The statement was met with widespread criticism online. The following day, the institution changed the wording to forbid women from attending Eid prayers without the veil.

The change, however, did not put an end to the controversy.

The Arabic hashtag for “Down with Sheikh Al-Azhar,” demanding the ouster of Al-Azhar Grand Imam Sheikh Ahmed el-Tayeb, trended on Twitter.

Sahar al-Jaara, an Egyptian journalist who writes for several Egyptian newspapers including al-Watan and Al-Masry Al-Youm, tweeted July 10, “The Al-Azhar sheikh is not the guardian of society and the veil is not an obligation.”

Neither Al-Azhar nor Tayeb have publicly responded to the comments.

While this was not Egypt's first veiling controversy, it was the first criticism leveled against Al-Azhar's grand imam himself, and many clerics have responded by attacking the fatwa's critics.

Rida al-Danbouki, director of the Women’s Center for Guidance and Legal Awareness, told Al-Monitor, “The renewed debate over the headscarf in Egypt is nothing but an attempt by clerics to impose patriarchal control and oppression on women’s bodies,” calling such efforts "misogynistic and incitement against women.”

Danbouki explained, “The Egyptian constitution stresses the personal freedom of all citizens and strictly forbids infringing upon it,” referring to Articles 54 and 99.

He added, “Women are completely free to wear whatever they want, whenever they want, without any supervision from anyone or male control, and without being discriminated against. Everyone is equal before the law.”

Fatiha al-Hanafi, a professor of jurisprudence at Al-Azhar University, told Al-Monitor, “Some parties are hostile to Al-Azhar,” adding, “These parties tend to spark controversies over established doctrinal issues in Islamic law, including the issue of the hijab.”

She went on, “According to all three [Abrahamic] religions, whether Judaism, Christianity or Islam, women must wear the veil and loose clothing. Also, the Quran specifically refers to the hijab in Verse 31 of Surah an-Nur,” she said. “Yet some insist on confusing these religious concepts that are uncontested, namely the issue of the hijab.”

Abbas Shouman, the Al-Azhar official responsible for issuing fatwas, wrote in a July 16 Facebook post that the organizers of music events ought to force attendees to wear loose white clothes.

“Obliging women and men to wear white to attend an event does not contradict personal freedoms. It is just a reminder for women to observe the hijab dress code, which is a religious duty,” he added.

Meanwhile, Noha Mohammad, a 20-year-old Egyptian university student, told Al-Monitor, “The controversy around Al-Azhar’s electronic fatwa is misplaced. It is only normal for women going to prayers to be veiled, whether they wear it in their daily lives or not,” adding, “The way I see it, it did not say anything on imposing the headscarf on women in general.”

“The hijab issue has become almost a phobia for some, in light of the tendencies of scholars such as Saad al-Din al-Hilali and others to impose the headscarf on women,” Mohammad said.

Sara al-Sayed, an Egyptian woman in her 30s, told Al-Monitor, “Religious institutions are fighting to impose the hijab as a religious duty. But at the end of the day, this remains a personal freedom. Every woman is free to put it on or to give it up. Women are completely free in their choices, regardless of any institution.”

Saeed Sadiq, a professor of political sociology at the American University in Cairo, told Al-Monitor, “The controversy surrounding the headscarf in Egypt is an attempt by many clerics to impose male dominance on Egyptian women.” He went on, “This is an unending controversial issue, as are all women’s issues, because of the Egyptian clergy’s focus on them, while ignoring political issues and other matters.”

Sadiq said, “Most of the recent fatwas have been focusing on women's clothing. But what about women’s education and protection from violence in the street, at home and at work?”