Fatwa on the go: Egypt’s Al-Azhar sets up shop in Cairo metro

While Egypt’s Al-Azhar says its recently installed kiosk offering fatwas to subway commuters is aimed at countering extremism, some see it as a sign of increasing religiosity in the country. 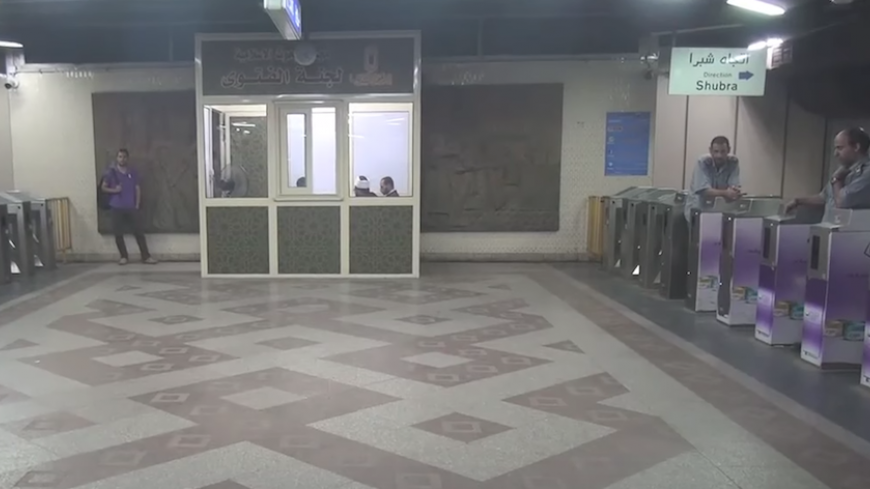 A new kiosk in Cairo's metro allows commuters to ask Al-Azhar clerics for religious advice. This screenshot was taken from a video uploaded on July 20, 2017. - YouTube/ElWatanNews

Commuters passing through Cairo's downtown Al Shohada metro station, one of the busiest stops on Cairo's subway system, are now being offered a new service along with the train rides: religious edicts or “fatwas” free of charge courtesy of Al-Azhar.

Seated behind a desk in a small kiosk that bears a sign reading “Fatwa Committee,” two on-duty clerics from Sunni Islam’s oldest and most prestigious institution give religious guidance and advice to commuters who seek them out in what the sheikhs say is an attempt “to counter extremism.”

The fatwa kiosk is the first of several that Al-Azhar plans to install at Cairo metro stations in the coming months. It is the brainchild of Mohi El Din Afifi, the secretary-general of the Al-Azhar-affiliated Islamic Research Academy, who hopes “to bring Al-Azhar closer to the people,” according to Sheikh Ali Mostafa, one of the two clerics working the afternoon shift when Al-Monitor visited. The kiosk, which began operating July 17, is open from 9 a.m. to 8 p.m. daily. “Since its launch, hundreds of curious commuters have stopped by to greet us and ask questions on a host of religious matters ranging from rulings on marital and divorce issues to life insurance and atheism,” Mostafa said.

“The response from the public has been overwhelming. There is a real hunger for knowledge about religious matters,” Sheikh Ahmed Ramzy, the second cleric, told Al-Monitor.

“We are here to clear misconceptions about religion, especially in light of the plethora of myths and false information that is being disseminated on social media and on religious satellite channels linked to radical groups,” he said.

Clad in a traditional Islamic caftan (the robe traditionally worn by Muslim clerics), Ramzy consulted with his colleague before responding to a question from 18-year-old Hagar Salah, a veiled commuter, about what Sharia says about practicing taekwondo in a mixed venue.

“Does the sport involve physical contact with the opposite sex?” the sheikh asked. “If not, then it is fine,” he said, but quickly warned, “As long as you wear a loose sports outfit that does not show your body.” After hearing the fatwa, Hagar walked away to catch a train approaching the station, clearly relieved that the sheikh had told her she could continue to practice the sport she enjoys.

A small line was forming outside the kiosk, with commuters waiting patiently for their turn to sit down with the Al-Azhar scholars and pose their questions.

“Launching the kiosk is timely,” Hanan Abdel Badie, a metro rider and mother of three, told Al-Monitor. “Extremist groups are finding it easy to recruit youths because the latter do not have much knowledge about their religion. Their ignorance makes them easy targets,” she said.

Mohamed Abdel Maqsoud, a middle-aged commuter working at the Endowments Ministry, said he, too, welcomes the idea, albeit for a different reason. “Most people are busy and don’t often get a chance to consult sheikhs on religious matters. Now the knowledge is accessible and what’s more, the consultations are private.”

While the consultations are one on one, guaranteeing a degree of confidentiality, visitors are required to sign their names and write their phone and ID card numbers in the large registration book on the desk in the glass and metal booth — a move that has raised concern among skeptics who prefer not to reveal their identity. The sheikhs, however, insist the measure is “necessary.”

“Sometimes more research is needed or new facts emerge. We need to have the visitor’s contacts to keep them updated,” said Sheikh Sayyed Tewfiq, the head of religious guidance for Cairo at the Islamic Research Academy.

But liberals see the kiosks as a sign of increasing religiosity and an attempt by Al-Azhar to impose religious values and morality on the public.

“During the one-year rule of Islamist President Mohammed Morsi, Egypt’s liberals had complained that the now-outlawed Muslim Brotherhood was ‘Islamizing’ Egypt. The current government — widely perceived as being secular — is doing just that, yet few liberals are complaining. The subway is no place for religion; religion should be kept strictly within the confines of mosques,” a commuter told  Al-Monitor on condition of anonymity.

Many Egyptian liberals complain that President Abdel Fattah al-Sisi’s talk of modernizing Islamic thinking is “no more than lip service.” Rights advocate Bahey El Din Hassan, an outspoken critic of the Sisi regime, tweeted that the kiosks were “another attempt by the government to woo the ultraconservative Salafis,” warning that it would backfire as such measures “were seriously undermining Sisi’s popularity.”

Sahar Naqy, a Christian commuter who had a cross tattooed on her wrist and was on her way to the Cathedral bookstore where she works as a sales representative, said she disapproved of the idea, calling it “discriminatory” and an “in your face bias.”

“Can you imagine what the public’s reaction would be if Christian clerics were to give advice to the Christian faithful in a public space? We only want to be treated as equals in our own country,” she said.

The launch of the kiosk comes on the heels of a series of other measures recently undertaken by the management of the metro that have raised eyebrows. Last month, during the Muslim fasting month of Ramadan, a half-hour religious lesson was broadcast daily after the afternoon call for prayer on the metro’s internal radio station. The metro’s management decided to continue the broadcasts after the holy month ended due to “the show’s immense popularity,” Ramzy said. Meanwhile, a small prayer area has been designated at some of the main underground metro stations. Some Egyptian liberals see such moves as “signaling a worrying trend of increased religiosity,” and the fatwa kiosks have sparked controversy on social media.

Pro-government lawmaker Mohamed Abu Hamed, who in recent months has presented a bill to parliament to reform Al-Azhar that includes term limits for the grand imam, also protested the launch of the kiosk. In a Twitter post July 20, he asked, “How can the state allow such a shallow and scandalous move that reflects the inability of Al-Azhar to comprehend the need to reform Islamic thinking and only serves to affirm that the institution is far removed from the reality we are facing?”

Al-Azhar, currently at the center of a collision between politics and theology after Sisi’s calls for religious reforms, has largely resisted any attempts by those outside the religious establishment to dictate how the religious discourse should function. In January, Al-Azhar’s Council of Senior Scholars categorically refused Sisi’s proposal to invalidate the Islamic practice of verbal divorce, calling the suggestion “un-Islamic.” Liberal researcher Islam El Beheiry’s criticism of canonical Sunni books as “inspiration for extremism” earned him a one-year prison sentence last year on charges of “blasphemy” after an uproar over his remarks from Al-Azhar. A pro-reform cleric from Al-Azhar who asked to remain anonymous because he was not authorized to speak to the press told Al-Monitor the launch of the fatwa kiosk “is a last-ditch effort by Al-Azhar to whitewash its tainted image and consolidate its power in the wake of growing accusations that it was fueling extremism and what it sees as interference in its internal affairs.”