Egypt's Al-Azhar looks to 'cafe preachers' to spread its message

Egypt's most influential religious institution hopes to gain a wider audience and counter radical ideas by sending preachers to the coffee shops. 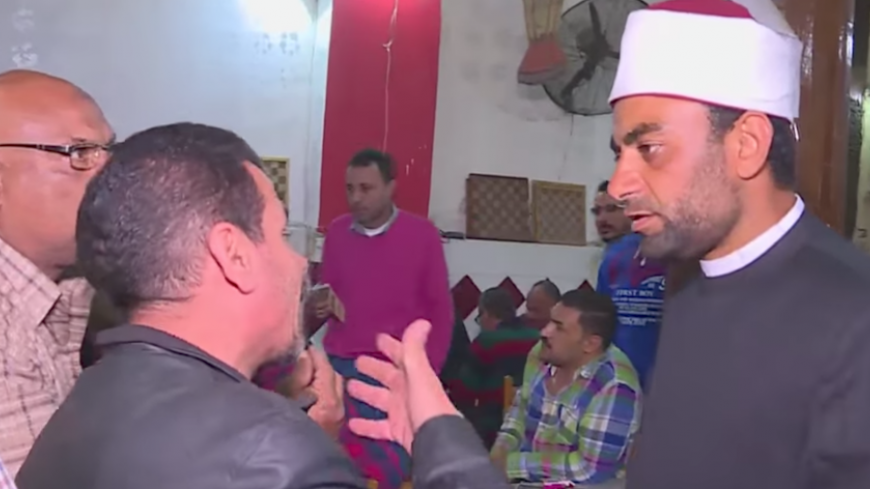 A preacher from Egypt's Al-Azhar speaks with patrons in a Cairo cafe in this still from a DMC broadcast. Uploaded April 29, 2017. - YOUTUBE/DMC

At a cafe in downtown Cairo, where customers are chatting among themselves as waiters shout drink orders to the kitchen staff, a number of Al-Azhar preachers arrive decked out in their traditional attire. They talk for a while to the cafe owner, before saying "Assalamu Alaikum" — a traditional Muslim greeting meaning "Peace be upon you" — to the customers, before introducing themselves.

"We are preachers. We want to talk to you. Will you allow us?" one of them asked a surprised patron, who agreed to the request. As time passed, the customer started a conversation with the preacher.

This scene could soon become common at the many cafes in Egypt. The idea of “cafe preachers” is the brainchild of the Al-Azhar Islamic Research Academy. Late last year, preachers started mingling among cafes' clientele in some Upper Egyptian cities, where they were welcomed warmly.

Mohieddin Afifi, the secretary-general of the academy, told local media in February that the idea of cafe preachers developed within the framework of renewing religious discourse and improving the communication between Al-Azhar's preachers and the public. This new way of communication aims at confronting ideas that are radical and foreign to Egyptian society.

"Those preachers are increasing young people's awareness and highlighting the importance of moderation in all walks of life. [They] also shed light on tolerance of the Islamic religion that is far removed from extremism," Afifi said.

On numerous occasions since he came to power, President Abdel Fattah al-Sisi has called for renewing religious discourse based on the true understanding of Islam.

"We are in dire need of renewing religious discourse and correcting mistaken religious concepts advocated by terrorists who believe they can intimidate innocent people and go unpunished," Sisi said on one occasion late last year, expressing regret over the misunderstanding of Islam, which makes some people justify killing in the name of religion.

The president emphasized that renewing religious discourse will not include changing Islamic principles, but rather using the terminology of our age and applying it to benefit from the way our ancestors handled the concerns of their time based on the true understanding of Islam.

To achieve this, Sisi urged Al-Azhar scholars and the Ministry of Religious Endowments to make more efforts to renew religious interpretations in order to achieve peace in the country and to prove to the world that Islam is a peaceful religion.

Preacher Mohamed Abdel-Tawab told Al-Monitor, “This experience allows people to talk to us directly and ask whatever they want. We all are eager to address people's concerns about issues in their daily life and religious questions."

He said, “It also aims to spread moderate Islam, which doesn’t involve rigidity, extremism and violence."

He pointed out that before addressing patrons at cafes — which often include many young people — the preachers must first get the cafe owners’ permission to talk to the customers.

"Some owners refuse, so we leave immediately. Others think that we may stop the clients from smoking or playing chess, something that we assure them will never happen," Abdel-Tawab said.

Youssef Ragab, another preacher Al-Monitor spoke with, said that one time he and other colleagues went to a cafe in Alexandria and noticed that the patrons were busy watching a soccer match. “So we waited until it finished and came back to the cafe. We make sure that we never interfere in people’s activities at the cafe. We do not force them to talk to us and if they refuse, we leave immediately."

Ragab said that most people's questions are about family problems such as divorce or other topics such as ethics, good manners and everyday dealings with people. He noted that some of the questions require a more in-depth answer, such as those about Islamic jurisprudence.

Mohamed Abdou, a patron at a Cairo cafe, told Al-Monitor about his experience, saying that the preachers’ advice “is presented in a smooth and light manner.” He noted that the preachers do not issue warnings or exaggerate their messages. “It is nice that they find us and listen to our questions,” he said.

"I think it is their role to do this," Abdou added, and he expressed hope that preachers will go out in all governorates, especially in rural areas where the Salafists reside.

Yet photographer Ali Salem does not welcome the idea. "The preachers should be at mosques, not cafes. We come to cafes to chat, play and smoke, not to listen to preachings,” Salem told Al-Monitor.

He added that religion is not a “commodity” to be presented in public places.

Mohamed el-Sayed Wardani, the media coordinator of the Islamic Research Center, told a local TV show that in the coming period preachers will start to go to cultural and youth centers. He said that some preachers have gone to remote areas such as Halayeb and Shalateen.

"People there have a thirst for preaching. We will do our best to reach people and correct their misconceptions," he said.

A protocol of cooperation also has been signed between the Islamic Research Academy and the Metro Authority to broadcast daily programs through metro radio during the holy month of Ramadan, which started May 27. Commuters can listen to the programs presented by Al-Azhar preachers while they are on the subway.

The programs will highlight the concepts of Islam and focus on religious education and the moral aspects of people's lives, and a number of preachers will be present at various metro stations in Cairo to interact with passengers.