Egypt’s Ministry of Religious Endowments is sending clerics to the North Coast, as videos of young people dancing on the beach there have recently surfaced. 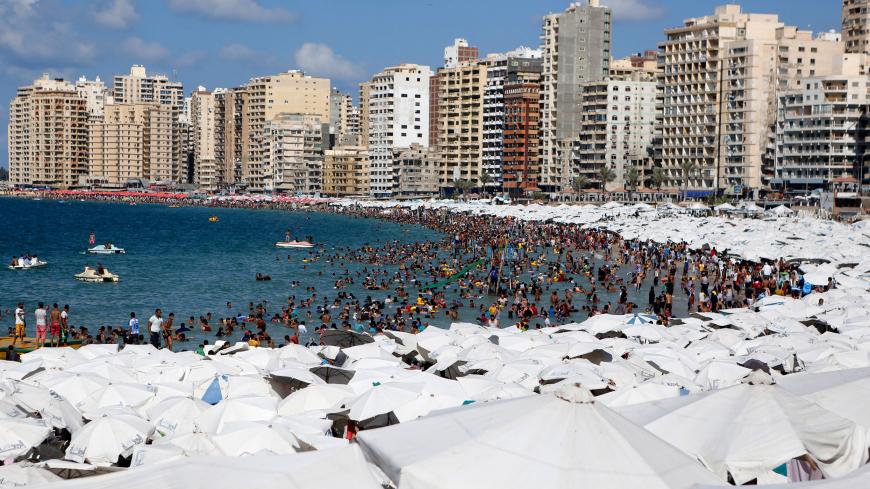 Egyptians crowd a public beach during a hot day nearing the end of summer vacation for schools in the northern coastal city of Alexandria, Egypt, Sept. 5, 2014. - REUTERS/Amr Abdallah Dalsh

Egypt’s religious authorities are sending clerics to the town of El-Alamein on the country’s upscale North Coast (Sahel) to speak with vacationing Muslims. The move is aimed at making inroads with young people, especially during the summer season, and is part of the government’s plans to revive Islamic preaching and rejuvenate religious discourse.

The Ministry of Awqaf (Religious Endowments) said in an Aug. 14 statement that previous efforts have been successful nationwide. In 2017, the ministry launched missions to cafes to promote a moderate version of Islam.

However, the clerics won’t be preaching to “half-naked” people on the beach, as Sheikh Salem Abdel Galil, former undersecretary of the ministry, told Al-Monitor.

“There are mosques in these resorts where the preachers will open communication channels with the vacationers in these spots. The Awqaf Ministry sends missionaries from time to time to various destinations across the country. The objective is to reach out to as many people as possible, especially in the summer,” Abdel Galil said.

The move comes within a raft of steps taken by the country’s religious authorities — the Awqaf Ministry, the prominent seat of Sunni Muslim learning, Al-Azhar University, and Al-Azhar's Islamic Research Academy — to revive Islamic discourse.

It also comes in response to what social media and some local news portals have recently labeled “increasingly wild gigs” in Sahel, 270 kilometers (168 miles) northwest of Cairo. Vacationers in these spots post videos featuring young women belly dancing on the beaches.

“This is the spirit of the summer in Sahel. Dancing is no sin as long as people don’t hurt anybody," 38-year-old engineer Mahmoud Sallam told Al-Monitor. "Some people like to shoot belly dancing and post it on YouTube and other social media mouthpieces. Some people just like it hot."

Sallam, who usually spends his summer vacation with his family in Sahel, said preaching won't put an end to belly dancing at Sahel beaches.

“My wife and daughter do not dance at the beach. We just watch some other people do it. Of course, that behavior is totally against the mainstream traditional culture. They do it out of personal freedom and nothing more,” Sallam said.

“Being conservative has nothing to do with faith. Preachers may go to cafes, clubs and other places to approach more people. But I doubt they could go to the beaches. The last thing families would need to see at the beach is a man telling them [whether something is] haram [unlawful according to sharia] or halal [lawful],” he said.

As for the true meaning of renewing religious discourse, Ali Gomaa, a former grand mufti, was quoted by El-Watan news Aug. 5 as saying it is “the direct return to the original sources of Islam.”

“A new religious discourse means purifying the religion of the effects of different cultures and traditions that contradict Islam, especially with regard to pornography, permissiveness and some other issues propagated by human rights, for example, homosexuality and abortion,” Gomaa added.

Seif Ragab Kazamel, former head of Al-Azhar’s Faculty of Sharia and Law in the Nile Delta city of Tanta, called for coordination among the parties concerned — the Awqaf Ministry and local administrative authorities.

But, he told Al-Monitor, “It's a wonderful idea to send missionaries to cafes, resorts, universities, sporting clubs and the like where people, especially the young men and women, feel at ease. Preaching is easier at these gatherings."

Kazamel added, "When I was a student at Al-Azhar University in the 1970s, I participated in preaching activities in the district of Sidi Bishr, Alexandria, in the summer."

“I think preachers should remain doing their job at mosques or giving lectures on TV. Men of religion should not expose themselves to certain places like a beach,” she said.

“Preachers are not salesmen to go from door to door. The media organs, especially TV, should increase the religious content for Muslims and Christians instead of all these cooking shows. People who go to cafes won’t listen to any preacher while smoking a hookah."