The Egyptian state is expanding its control over the dialogue in mosques, and is now preventing Salafists from giving sermons without a permit. 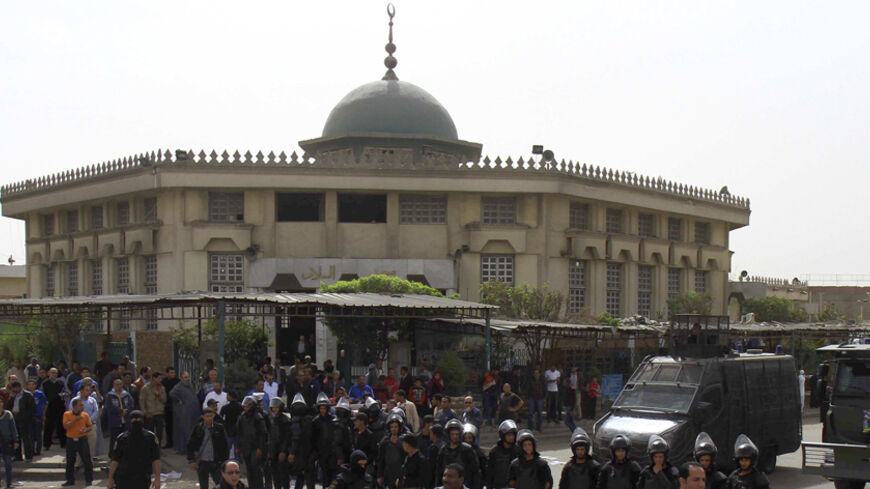 Police stand guard in front of a mosque during Friday prayer ahead of a protest by supporters of Islamist President Mohammed Morsi, who was overthrown by the army in July 2013, in Cairo, March 7, 2014. - REUTERS/Al Youm Al Saabi

CAIRO — Egypt’s government has launched a new movement against Salafist figures in the country, in line with its policy to manage mosques and marginalize preachers affiliated with certain religious political groups. The government had focused on dismissing any preacher suspected of being affiliated with the Muslim Brotherhood.

Since the ouster of Brotherhood-affiliated former President Mohammed Morsi, the Ministry of Awqaf (religious endowments) has made many moves to sideline, expel and punish several imams for their pro-Islamist political activity in mosques.

Al-Monitor secured a copy of a statement issued in August by the Egyptian Initiative for Personal Rights, which stated that the ministry had launched campaigns against religious magazines and associations, mandated topics for the Friday sermons and punished violators.

A media dispute between officials in the Ministry of Awqaf and leaders in the Salafist Dawa Party and Nour Party broke out against the backdrop of warrants issued against Yasser Borhami, deputy head of the Dawa Party, for taking a stand in an Alexandria mosque without permission from the state. Following this, the Ministry of Awqaf decided to impose new and strict conditions on preaching in Egyptian mosques.

According to a statement by the Ministry of Awqaf, of which Al-Monitor obtained a copy, Minister of Awqaf Mohammed Mokhtar Jomaa issued two decisions on Sept. 13. The first concerns the requirements for obtaining a sermon permit, and the second reorganizes the tasks of the mosque’s imam. According to this decision, the preacher should work according to the plan and needs of the Ministry of Awqaf, on the condition that he holds a certification from Al-Azhar in Sharia or Arabic studies.

The ministry’s decisions were not limited to specifying the people authorized to give sermons in mosques. The ministry also determined the dates of religious lessons in mosques according to a monthly and yearly state plan. It also banned holding Friday prayers in corners and places of worship whose surface area is less than 80 meters (87.5 yards), except when necessary and with written permission.

Undersecretary of the Ministry of Awqaf Sheikh Jaber Tayeh told Al-Monitor, “No official approvals have been issued to allow Salafists to preach in mosques.”

He said, “Religious preaching in Egypt is handled by the Ministry of Awqaf. This is not the responsibility of the Salafist preachers. Whoever wants written permission for preaching should abide by the ministry’s conditions. He will not be favored for being a Salafist or for being affiliated with any other political faction. We have the right to choose the people who are entitled to preach.”

Regarding whether the government, represented by the ministry, is able to assign imams affiliated with it to all mosques in villages and provinces outside Cairo, Tayeh confirmed, “We have many imams and preachers who can cover the mosques in Egypt. The number of Al-Azhar scholars is sufficient, and there is no need for the ministry to appoint others.”

Despite the strict measures, which forbid Salafist movements from delivering orations — a decision that stirred the anger of Dawa Party members — Salafist leaders are still seeking to ease the tension with the state by requesting meetings and participating in friendly discussions with the ministry, the presidency and other officials.

The spokesman for the Dawa Party, Adel Nasr, told Al-Monitor, “The Dawa Party leaders, including Yunis Makhyoun and Ashraf Thabet, met with the minister of Awqaf last week. It was a friendly encounter, and we confirmed our interest in fighting the extremist ideology and protecting pious men from being lured into radical movements.”

A source from the Salafist Dawa Party told Al-Monitor on condition of anonymity, “The meeting initially addressed the complaints about not giving Salafists permission to preach, although they agreed to comply with the law and to submit official requests. They also formed a legal framework for clerics belonging to the Salafist Dawa Party and Nour Party.

“We do not want to clash with the state. … We are waiting for calls with the prime minister and president to mediate between us and the Ministry of Awqaf to solve this crisis,” he added.

The Salafist movement in Egypt is still counting on its harmonious relationship with the state, which has remained so since the Salafist groups helped topple the Muslim Brotherhood’s rule. Salafists are also betting on winning better representation in the next parliament. However, their relationship with the state is marked by disputes and undeclared tensions due to security policies by which the state undermines their role and reduce their power.

Ahmad Ban, a political Islam researcher and analyst, told Al-Monitor, “The Salafist movement in Egypt overestimated its weight at a given moment in the Egyptian political system. The movement thought that the state owes it as a political faction that contributed to toppling the Brotherhood and ousting Morsi on June 30 [2013]. Salafists expected the state to give them a margin of freedom accordingly.

Despite the Salafists' anger with the state’s measures, Ban said neither the Dawa Party nor the Nour Party will move against it.

Meanwhile, the crisis persists. The Salafist movement in Egypt is attempting to impose itself through a peaceful policy of cooperation with the state, and the state is trying to frame its decisions against Salafist groups as rules monitoring religious discourse in Egypt and as attempts to guard against radical ideologies. The moves, however, will undoubtedly strain the state’s relationship with the Salafists.