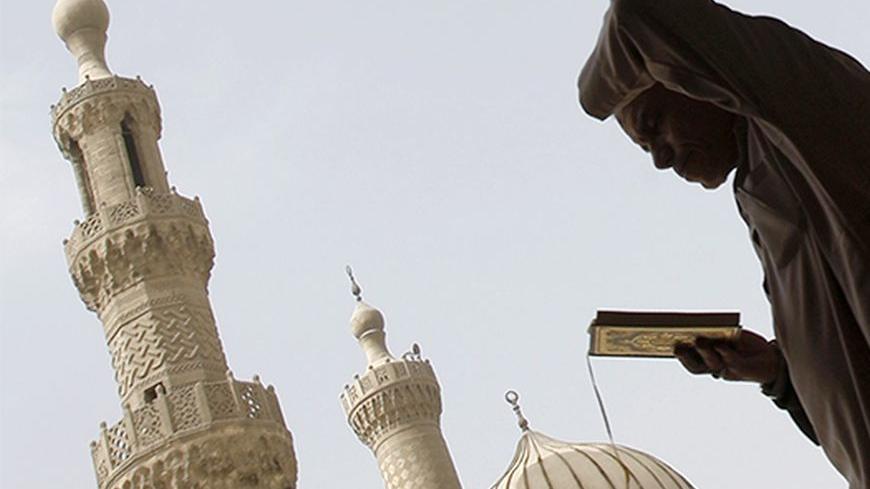 A man reads the Koran at Al-Azhar Mosque in the old Islamic area of Cairo, March 10, 2010. - REUTERS/Amr Abdallah Dalsh

Forbidding imams without Al-Azhar credentials from taking the pulpits of Egyptian mosques, and closing down mosques of less than 80 square meters (862 square feet) in size during Friday prayers, were decisions that have had quite an impact lately. The Egyptian Ministry of Awqaf (Islamic Religious Affairs) considered the move necessary to stop the exploitation of pulpits for political motives, and allowed it to put an end to the phenomenon of using the Egyptian pulpits for the dissemination of political speeches, through the implementation of strict measures that the ministry adopted in prosecuting and preventing preachers with known political orientations from giving sermons. The facts on the ground, however, demonstrate that the phenomenon, which for years remained the most useful tool for the forces of political Islam to gain popularity, has not been completely eradicated, and was only temporarily sidelined.

Barely weeks passed since the Ministry of Awqaf took the decision to ban approximately 47,000-55,000 monthly remunerated imams and preachers of mosques and prayer circles from taking to the pulpit on Fridays, before most of them returned to practice their activities through the innumerable prayer circles that dot the Egyptian landscape.

According to Ousama Shoukour, who is the Imam of the Ebad Al-Rahman Mosque in Buheira, and one of the preachers banned by the government from taking the pulpit, the decision did not stop him from doing just that. The decision is hard to implement because the people are the real overseers and not the Awqaf’s inspectors, each of whom is responsible for the supervision of 20 to 30 mosques. As a result, they cannot attend all the Friday sermons that take place, and no measure could ever deter believers from listening to their preacher’s words, especially if they really trust in him and believe him to speak truth.

Shouker told Al-Monitor: “As a result, I am banned by the government from giving sermons. Yet, the people ask and insist that I do so every Friday from a variety of mosques.” He stressed that the ministry’s methods were ill-conceived and extremist, because there were no effective substitutes for the preachers who were discharged from duty: “It should have instead held seminars and assessments for the current ones and excluded those whom it believed were too religiously hard-lined, or affiliated with a religious or political extremist faction, particularly considering that there are imams among them who are more experienced and more knowledgeable in Sharia than even Al-Azhar graduates.”

In response to the issue of not politicizing Friday sermons, Shoukour said that this was very difficult for any imam to abide by. An imam’s job is not like any other and is tied to spiritual matters, reality and prevailing social conditions. Even if a preacher refrained from talking about politics from the pulpit, as soon he steps down the podium, worshipers are sure to gather around him and ask his opinion and point of view about the situation and whom he thought was right or wrong. Therefore, the government would have been better served to give free reign to moderate, tolerant Islamist factions, and allow them to freely preach about Islam’s forgiving nature and its rejection of violence.

According to Shoukour, the decision to forbid Friday prayers in mosques of less than 80 square meters (861 square feet) is but ink on paper, because these prayer circles are controlled by the people, and are organized with their knowledge. No one has ever called the police to report a group of people who opened mosque doors to organize prayers on time. None of the preachers lacking Al-Azhar credentials have been arrested for violating the government’s decision while giving their Friday sermons from the pulpit.

The Salafist Nour Party was the first to object to the decision, and asked that Ahmad al-Tayyeb, Al-Azhar’s grand imam, intervene to find a solution to the Salafist imam’s predicament, after the minister of Awqaf decided to ban all non-Azhar preachers from taking to the pulpits. This effectively banned all Salafist leaders from giving sermons. Among them are Mohamed Hassan, Muhammad Hussein Yacoub, Abu Ishak al-Huweini, Mohamed Ismail al-Mokadem, Yasser Birhami, Mustafa al-Adwa, Abdullah Shaker and a number of other Salafist imams who possess a great deal of popularity.

Salah Abdel Maaboud, who is a member of the Nour Party’s High Council, told Al-Monitor that representatives of his party met with the minister of Awqaf to affirm that the decision was somewhat prejudiced, and that the latter promised to review the matter. In any case, the decision will not prevent the propagation of the Salafist message through mosques, particularly considering that some pulpits are affiliated with Al-Azhar, while others are controlled by a variety of other religious endowments. Furthermore, implementation of the decision falls upon provincial governments, many of which have not begun enforcing it. “Despite the decision, we continue to preach in mosques without problems so far,” Maaboud said. He added that moderate Salafist imams are exactly what Egyptian society currently needs to understand the difference between their teachings and those of extremist factions. These imams must be allowed to perform their religious duties in mosques and prayer circles.

These developments are all occurring at a time when the Ministry of Awqaf announced the imposition of strict controls over all mosques, to ensure the implementation of the aforementioned decision. The ministry called on all citizens to report anyone who violates the resolution by contacting the ministry after verifying the identity of the preacher. Ministry of Awqaf Undersecretary Sabri Abadeh considered the implementation of the decision to ban non-Azhar preachers from the pulpit as necessary to shield the country from the worst strife. He justified the action by saying that many preachers caused instability through their ill-conceived statements. Furthermore, and according to him, the decision served to maintain the moderate Muslim identity of the state, while rejecting all extremist slogans that might lead to anger among the Egyptian populace.

While Egypt’s civic political forces welcomed the decision, they also predicted that it would fail to curb the phenomenon of mixing religion with politics in the country. Hussein Abdel Razzak, one of the leaders in the National Salvation Front (NSF) and a member of the Tagammu (National Progressive Unionist) Party’s political bureau, told Al-Monitor: “The decision to ban politically oriented preachers from giving sermons, and restricting sermons to graduates of Al-Azhar University, is an important and necessary step. This is because the presence of parties and movements that mix politics and religion has led to a form of social conflict, and has transformed mosques and prayer groups from instruments of worship to platforms for political propaganda and ideologies. Yet, from the onset, we knew that this step alone would not be enough. The overall phenomenon must be fully uprooted, and we must return to the principle on which the Egyptian Revolution of 1919 was based: ‘God, religion, and a homeland for all.’ We must also prevent the establishment of religiously oriented or affiliated parties. Only then can we ascertain that we will succeed in preventing mosques from becoming political pulpits for factions espousing political Islam.”

Contrary to what has been taking place in Egypt and other Arab countries, Morocco pioneered the policy of preventing Islamists from using pulpits to talk about politics during Friday sermons. In fact, its policy has been a success for more than two centuries, and, as a result, seldom do we see conflicts being fought through pulpits. All Friday sermons in the kingdom end with prayers that the Amir al-Mu’miin (the king) be granted victory and power. The Moroccan Ministry of Awqaf’s policy of appointing imams of few words prevents the imams from causing the ministry, society and themselves problems. In Morocco, the Ministry of Awqaf talks about “spiritual security.” As a result, mosques are closed between prayers while loitering, eating and sleeping in them are forbidden. This policy, in effect for more than three decades, was protested by members of the Islamist Justice and Charity Party, who conducted prayers on beaches in an attempt to draw attention to the issue, back in the 1990s.

Perhaps the most prominent and latest of pulpit sermons that touched on political issues and caused widespread tumult, was the Friday sermon that took place in the Firdous Mosque of Riyadh, in which the orator wished evil on Syrian President Bashar al-Assad and Egyptian Defense Minister Gen. Abdel Fattah al-Sisi. This is despite the Saudi authorities’ stringent measures banning political rhetoric from Friday sermons.

The Egyptian government may still need more time to tighten its grip on houses of worship before it can control Friday sermons and steer them away from politics. Needed toward that end are effective legislative measures regulating the issuance of permits for these houses of worship, measures that have long been awaited and talked about for years to no avail.