Egypt's mosque minders: The rise of surveillance cameras in places of worship

Since the overthrow of Mohammed Morsi, the Egyptian Ministry of Religious Endowments has been trying to quell the spread of extremism in mosques, but critics warn these steps could threaten basic rights. 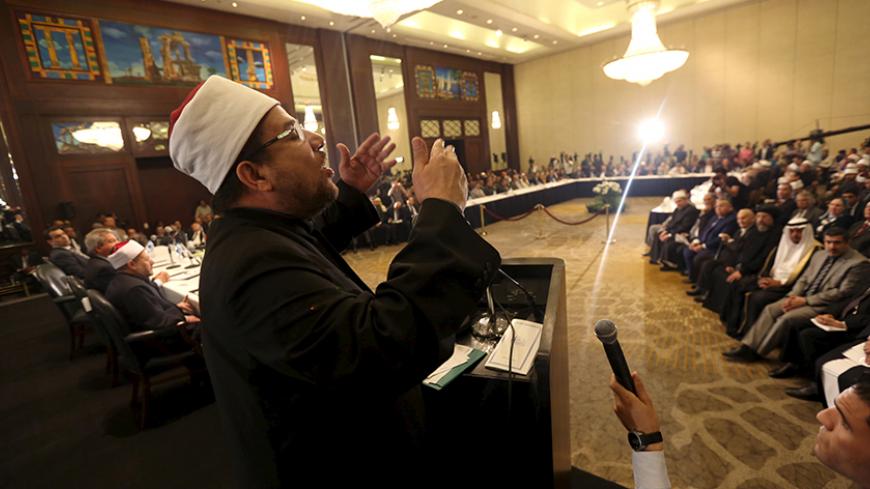 Egyptian Minister of Endowments Mohamed Mokhtar Jumaa speaks during a conference on renewing religious discourse in the hopes of confronting the extremism that has swept the region in recent years, Cairo, May 25, 2015. - REUTERS/Mohamed Abd El Ghany

On Aug. 13, Minister of Endowments Mohamed Mokhtar Jumaa decided to install surveillance cameras in mosques across the republic to protect them from terrorism and bombing attempts and to monitor the preaching of extremist ideas. The ministry began distributing surveillance cameras to the mosques in three stages, starting with the major mosques, followed by the main mosques that hold Friday prayers in provinces and then the mosques that are most frequented.

In this context, Sheikh Mohammed Abdel-Razeq, head of the ministry's religious department, said Aug. 13 in remarks to Egyptian newspaper Al-Masry Al-Youm, “The surveillance cameras will be installed outside and at the forefront of mosques in a bid to monitor terrorist and bombing operations. There will also be surveillance cameras inside mosques and corridors to monitor the work of imams and workers and the spread of ideas, religious lessons and Friday sermons. The cameras will also help control the mosque’s level of commitment to the ministry’s statements.”

Al-Monitor tried to contact Abdel-Razeq, but at deadline, he had not responded.

Also, private security companies have been contracted for three main reasons: to respond to advocates of militancy and extremism inside mosques, to ensure imams are fully dedicated to preaching, and to keep out books that incite violence, Jumaa said during a joint anti-terrorism coordinating conference held Aug. 21 by the Ministries of Endowments and Culture.

Hafez Abu Saada, a member of the National Council for Human Rights and head of the Egyptian Organization for Human Rights, said, “Installing cameras inside mosques is an abuse of citizens’ privacy and of the sanctity of prayers, especially.”

He told Al-Monitor, “If the Ministry of Endowments was serious about monitoring mosques to prevent any abuse of mosques or prayers, it could have installed the cameras outside rather than inside [the mosques].”

Abu Saada added, “The repercussions of this step will prevent citizens from going to mosques, as they will feel they are being watched inside God’s house on Earth." He added that if the ministry is really concerned about the spread of extremist thought inside mosques, it should fight this phenomenon through its employees appointed to mosques.

“This experience will definitely fail. We cannot monitor 108,000 mosques with cameras. This is financially burdensome for the ministry. It would need around half a million employees to watch the cameras and empty them daily, which is impossible.”

Another measure, imposed earlier this year, came with the threat of interrogation. During a Ministry of Endowments meeting chaired by Jumaa in March, a form was distributed to undersecretaries of ministers and directors of departments. The forms were to be filled out by all employees in the departments of endowments across Egypt, and especially imams. Anyone who failed to complete the form — which called for the repudiation of terrorist organizations and the Muslim Brotherhood and the rejection of all bombings and terrorist acts — would be referred to the Legal Affairs Ministry for questioning.

Also last year, the ministry issued a decision stipulating that Friday prayers shall only be held in main mosques, not in corners or oratories, unless prior written permission is granted. The same decision stipulated that no money can be collected in mosques except without certified official receipts to be handed over to the Ministry of Endowments. The ministry also granted itself the right to unify the Friday sermon across the mosques of Egypt.

In September 2014, the Ministry of Endowments annexed the mosques of the Principal Shari’a Society for the Cooperation Between Quran and Sunnah Scholars, one of the largest charitable associations operating in Egypt through weekly and monthly sermons, lessons and seminars in its mosques. The ministry accused the society of spreading extremist ideas through its imams and mosque platforms — estimated at around 6,000 across Egypt.

Khaled Salah, editor-in-chief of Youm7 newspaper, said Aug. 17 during his TV show “Akher al-Nahar” that the issue of controlling and monitoring sermons in mosques is blurry.

“The Ministry of Endowments has not issued a new religious sermon yet, despite the issued statements from Al-Azhar and others for such a sermon. It hasn’t trained charismatic preachers who can attract people to the righteous sermon either,” he said.

He asked, “Why is the Ministry of Endowments doing this? Why does it want to apply this logic using a security mindset?”

Salah expressed his concerns that just imposing security, without innovating new ideas, would be a lazy way of trying to solve problems. “We cannot think with a security mindset all the time. We must focus on the religious affairs. Extremism inside mosques is a major issue, but it is being addressed miserably,” he said.

As for the new restrictions on books, the ministry decided June 22 to inspect all mosque libraries to rid them of any extremist books and prevent the return of such books to these mosques, especially books written by Muslim Brotherhood leaders or extremist sheikhs.

It should be noted that books of Muslim Brotherhood founder Hassan al-Banna and Muslim Brotherhood philosopher Sayyid Qutb were found in the libraries, along with booklets by members of Gamaa Islamiya about jihad and taxes on non-Muslims.

Abdel-Razeq said during a June 22 news conference that only books authorized by the ministry and Al-Azhar will be allowed in mosque libraries. Whoever does not abide by this rule will face severe punishment, he added.

That same day, Jumaa ordered that each directorate be provided with a library list of content from the mosques and that no new books are to be added without the consent of the public administration of religious guidance and libraries in the ministry’s General Bureau.

Islam Nawawi, a member of the Ministry of Endowments technical office and the ministry's youth committee for the renewal of religious discourse, told Al-Monitor, “The status quo imposes an urgent need for the renewal of the religious discourse. This does not infer the modification of religion, as we will adopt an approach that is commensurate with the current era. Renewing the religious discourse is no magical work that can be accomplished overnight. It is rather a cultural and societal work that requires concerted efforts on the part of state institutions.

"We are not seeking to ban ideas and beliefs, but we want everyone to belong to the nation, knowing that every human being can carry out their practices individually.”

He concluded, “We are in the process of forming a defense system in this regard, namely the preventive trinity: the house, the mosque and the school."