In response to the Muslim Brotherhood’s allegations of restricting worshippers in mosques, Egypt’s Ministry of Endowment decided to open all mosques across the country at full capacity, in a first step to ease the coronavirus measures. 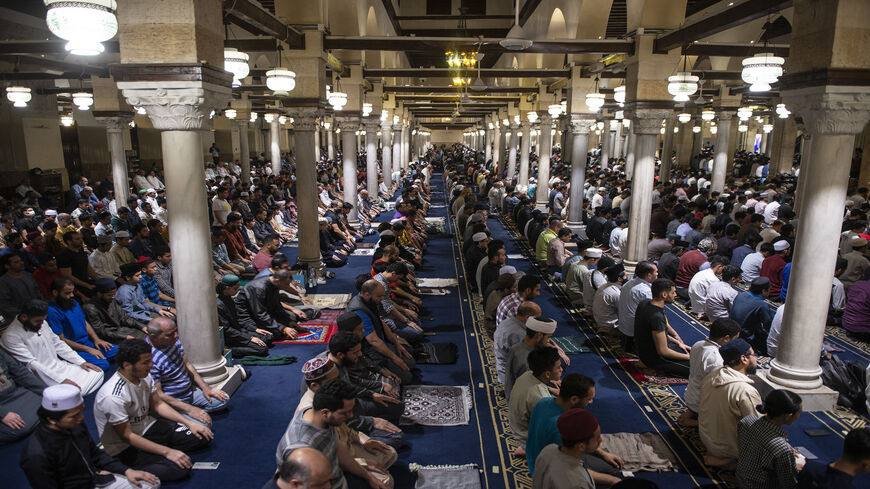 CAIRO — In a step to restore the situation to pre-pandemic conditions, Egypt’s Ministry of Endowments issued a decision to reopen mosques at full capacity, from dawn prayer until evening, starting May 6.

During a press conference held at the ministry’s headquarters in downtown Cairo May 6, Endowment Minister Muhammad Mukhtar Gomaa announced several decisions, including reopening mosques from 9 a.m. until evening prayers, resuming Sharia courses and Quran reciting for men and women held in mosques, intensifying courses as before the coronavirus pandemic, allowing visits to shrines outside prayer times, reopening the Islamic Cultural Center and the holy Quran memorization centers across the country, setting specific schedules for Quranic reciters in mosques and reopening the square of Imam Hussein Mosque throughout the day.

The ministry's decision to open all mosques at full capacity comes after scathing comments by the Muslim Brotherhood in the last 10 days of the holy month of Ramadan, when the ministry decided to suspend the Tahajjud and Itikaf prayers in mosques to try and limit the coronavirus spread among worshippers.

The decision caused an uproar on social media among Muslim Brotherhood supporters who condemned it as restrictions on worshippers who were not able to pray during the last 10 days of Ramadan.

Amid the scathing comments, the ministry was prompted to calm public opinion by retracting on the decision, allowing the performance of the Tahajjud prayers during nighttime on the 27th night until the last night of Ramadan, i.e., for three days only. This step was also not welcomed by the Brotherhood supporters, who continued to express their discontent with the ministry’s measures.

Ahmed Karima, preacher at Al-Azhar and professor of comparative jurisprudence at Al-Azhar University, defended the ministry’s decision to ban nighttime prayers, stressing in televised statements April 26 that it is within the Ministry of Endowments’ remit to organize the mosques’ work and affairs, and the ministry follows the Cabinet’s instructions in relation to crisis management at the level of the homeland, including measures to face epidemics.

According to Gomaa, the ministry took the decision to reopen mosques following the last meeting of the Cabinet’s Epidemiological Crisis Management Committee, which met before Ramadan to discuss the possibility of further reopening of public spaces.

Gomaa said during his May 6 press conference that the committee voiced concerns of opening mosques at full capacity during Ramadan. The plan, however, was to further open up the country after the fasting month, given the low number of COVID-19 cases, with mosques being the first to resume normal activity.

He noted that Al-Sayyida Nafisa Mosque would be the first to reopen from 9 a.m. until after the evening prayers, and during the early hours of dawn for dawn prayers as was the case prior to the coronavirus pandemic. He said that religious courses at the mosque would also resume starting with lessons of the afternoon prayers on Fridays.

The Tahajjud prayer is performed after the evening prayer and before the dawn prayer, usually during the last third of the night.

“These decisions come under the directives of President Abdel Fattah al-Sisi, and his interest in building the houses of God and to provide the appropriate spiritual atmosphere for the Egyptian people. The ministry’s decisions were run by the Cabinet, which approved them swiftly,” Gomaa said.

According to previous statements by Gomaa, Egypt has 140,000 mosques.

Abdullah al-Naggar, member of the Islamic Research Academy, one of the bodies affiliated with Al-Azhar Foundation, said that the decision to reopen mosques at full capacity reflects the Egyptian state’s particular interest in mosques.

He told Al-Monitor that this decision “will silence all Sunni supporters of the terrorist Muslim Brotherhood who spread malicious rumors that the state is restricting worshippers,” stressing that the government is doing its best to organize the work of mosques at all levels, whether in terms of preaching or opening more mosques.

“President Sisi attaches great importance to the preaching activity in mosques, and the [ministry’s] decision should further reassure the Egyptian people in relation to the significant decrease in numbers of infections,” Naggar said.

Osama al-Hadidi, executive director of Al-Azhar Global Center for Electronic Fatwas, praised the decision of the Ministry of Endowments to reopen mosques at full capacity, stressing that this decision represents a great joy for Egyptian Muslims, and is further proof of the declining number of coronavirus infections in Egypt. He expressed his wishes of seeing life fully return to normal across the world.

“This decision serves all of the Egyptian people and proves to the world that Egypt is safe from the dangers of the virus. Opening mosques at full capacity is further proved by the low rate of infections, which bodes well for the country and ushers in a full return to normal life,” Hadidi told Al-Monitor.